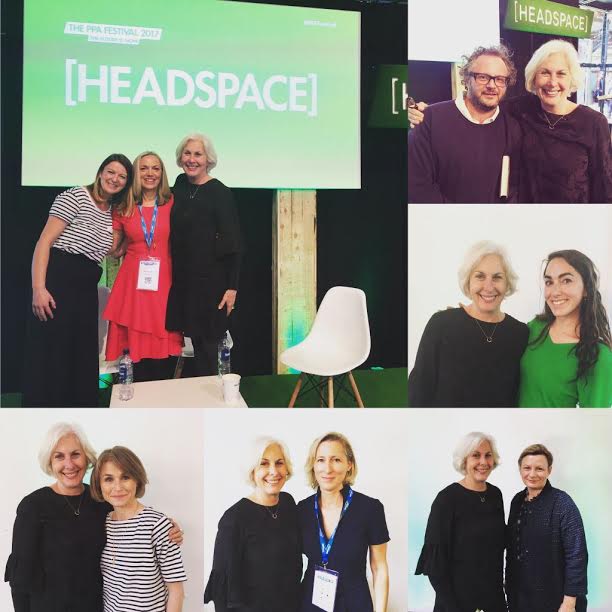 Wellbeing and Work at PPA Festival

I convened the Headspace stage at the Professional Publishers Association Festival this week and introduced people from the magazine publishing world to the concept of building wellbeing and protecting mental health at work.

Among those who appeared onstage to talk were welldoing.org therapist Wendy Bristow (top left, red dress) and Rethink Mental Health media manager Nia Charpentier (top left). Our conversation centred on how the stresses of modern day work practices can have a harsh impact on employees’ wellbeing. Wendy said she sees many young people from the media in her Angel practice who struggle with perfectionism and the inability to switch off from work. Nia said many companies were now showing a greater interest in helping employees develop resilience, and that many changes were minor, but had a strong effect - for example, building into meetings a genuine inquiry into people’s feelings and wellbeing.

Nutritional therapist Jeannette Hyde (centre, bottom), author of the Gut Makeover, talked about how a typical journalists diet —- carbohydrate and sugar-heavy, with plenty of caffeine and alcohol —- was in no way the right way to fuel a working person. One of Jeannette’s top tips was to include much more fruit and vegetables into the working day diet. She also said our guts benefit greatly from a 12-hour fast from dinner to breakfast, to give the gut time to grow new, healthy bacteria.

Emma Mills (centre, right) is a mindfulness teacher and author of Inhale. Exhale. Repeat. She spoke about how she came to meditation through the study of psychology and then led a good-sized audience in a guided meditation.

Victoria Woodhall (bottom, left) is now the editor of beauty website Get the Gloss, but is also a qualified yoga teacher. In her previous role, as features editor at YOU Magazine, she used to teach a successful weekly yoga session for staff in the building. Given that we were in a room filled with chairs, actually doing a downward dog was out of the question, but Victoria did come up with movements we could all do in our chairs, or standing near them. She also explained how yoga can still our ever-whizzing brain; it’s another type of meditative practice, useful for any of us if we are finding that we cannot leave work behind once we have left the office.

I also interviewed two well-known people in the magazine world. First was Sara Cremer (bottom, right), CEO of Redwood, the content media company. She explained how she had long struggled with depression, but hidden it from those she worked for. Finally, she was forced to tell her immediate boss, who showed great empathy and told her to take all the time she needed to recover. Now she is a great believer in the idea that mental health should be discussed, without stigma, and within the workplace.

James Brown (top, right) was editor of Loaded magazine and GQ. Stories of his rock’n’roll lifestyle, complete with drug and alcohol excesses, are legend in the magazine industry, but led to problems with addiction and chaotic behaviour. Nineteen years ago, one woman who worked at the publishing magazine which was then employing him, asked him if he needed help. He remains grateful for the way she reached out to him, and to the company which footed the bill. He entered a rehab programme, and has abstained from drugs and alcohol ever since.

This was the first time the PPA had included a wellbeing element in their annual festival. The success of the Headspace stage means it is unlikely to be the last. Work and mental health is an important topic, and it’s great to see it being addressed creatively.