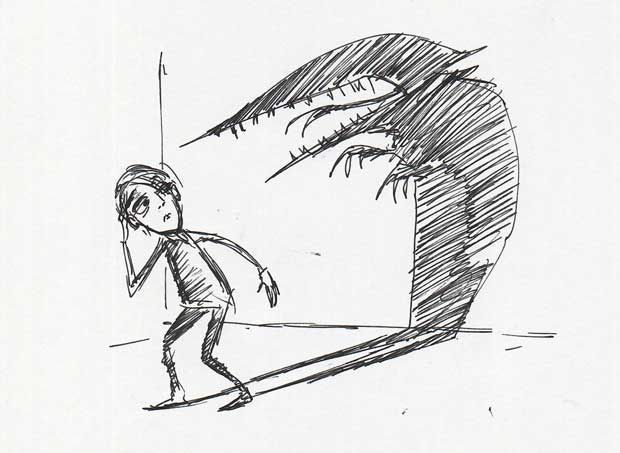 How many times have you walked along a tube platform and thought, “What if I jumped?” before thinking, “Why did I think that?” and then panicked? Or had a sudden image of kissing your own relative and then cringed?

What are OCD and intrusive thoughts?

Intrusive thoughts like those above are extremely common, and we can have intrusive images and intrusive urges, too. These are not the same as hallucinations. Intrusive thoughts and images come into our minds seemingly randomly, and they can seem out of place, bizarre, or even taboo, in their nature. They’re usually violent, sexual or blasphemous – naturally, people tend not to admit to having them. But there is no shame in intrusive thoughts, and it’s about time we started talking openly about them.

Most of the time, they are fleeting thoughts and pass by without much concern to the person experiencing them. But for some people – particularly people suffering with OCD or pure obsessional OCD – intrusive thoughts are harrowing because they happen frequently and intensely, and the person starts to attach meaning and significance to them.

There is a misconception around obsessive compulsive disorder, which emphasises compulsions like checking and washing, without taking into account these intrusive thoughts and/or images that underlie what’s really at the heart of it.

If a client is afraid of bringing their intrusive thoughts into the room, it will only perpetuate their problem.

I believe that if we can become more comfortable with our own intrusive thoughts, we might be in a better place to support those suffering with them.

The best analogy I can give for the difference between someone who doesn’t have OCD and somebody who does is to imagine driving on an open road.

Every now and then, the car might stumble on a pot hole: this pot hole might be small and doesn’t cause too much of a problem so they drive on. Perhaps they encounter another few potholes on their journey. But they arrive safely, and the thought of pot holes on the way home doesn’t bother them. Someone with obsessive compulsive disorder keeps stumbling on pot holes – every now and then they get trapped in them. The wheel of the car starts free-wheeling and they can’t get out. They are literally trapped. Even if they find a way out eventually, they are now so anxious about that happening again that they drive more cautiously – they may seek out another route, even if it means taking longer to get to the destination. Every time they see a pot hole from there on, they will do everything they can to avoid it. Even the thought of encountering a pot hole itself might trigger anxiety. The anxiety then re-triggers the thought. They might abort the journey altogether. They might decide never to drive again.

People tormented by intrusive thinking tend to live by a high moral code (this could be, for example, from a strict or religious upbringing, where the price for transgression or misdeeds is punishing – leading to a desire to be good, to keep in check, and a fear of mistakes for the consequences that they’ll being) and so what’s at stake for having them seems higher. Often, the intrusive thought/image/urge is exactly the thing that they are totally morally opposed to, which makes it so terrifying. The thought then that this could have come from them becomes a source of extreme distress. They can then get caught up in knots about it and begin to question their morality, their sanity, their reality. Once they are in this place, they are in a heightened state – so they become more alert the next time an intrusive thought occurs, which increases the anxiety.

What happens next is a need to suppress the thought or make it stop, or go away. The act of trying to suppress the thought ironically makes it worse: think of trying to sit on a spring – the more pressure applied to squish it down, the more intense the spring pops back up. This can be terrifying to someone with OCD because it starts to feel like a monster that won’t go away – if it won’t go away, the natural conclusion one comes to is that it must necessarily be an intrinsic part of themselves: the thought that they must be inclined this way becomes abhorrent. Then that becomes an uphill battle and perpetual cycle: anxiety, leading to hyper-awareness, leading to more intrusive thoughts, leading to a need to suppress and escape, leading to higher intensity intrusive thought, leading to an ultimate sense of hopelessness and a lack of control. It's so important to understand that this process is tortuous for someone with OCD and they are suffering terribly.

Because the thoughts feel so ‘alien’ to the person’s own sense of their identity, it’s no wonder why someone with OCD may begin to feel out of control, believe there is something inherently ‘wrong’ with them and turn to coping mechanisms like praying or repeating numbers or phrases in their head a certain number of times. Not everyone with OCD necessarily has overt compulsive behaviours. Sometimes, compulsions can occur internally, like counting and checking and because they’re invisible, nobody else notices until they start to interfere with daily living like getting to work on time, or getting enough sleep. In some cases, there are no compulsions whatsoever; just the intrusive thoughts.

So much of this is to do with society – we are given messages from young about right and wrong, and we modify our behaviour in adulthood to fit our society’s context accordingly. These mechanisms are there to serve us well: they become great behaviour modifiers and stop us behaving recklessly. It can happen, for example, if we get a pang of jealousy when a partner still speaks to an ex. Guilt might immediately follow that pang, leading to internal self talk, or introjects, of “I mustn’t be jealous” and we suppress it/retroflect it. But feeling something is not the same as acting on it, and one doesn’t necessarily mean the other.

Learning how to accept the thought as natural while recognising the rules of social decorum and knowing we’d never act on them is precisely what distinguishes reality from non-reality. It’s a fine balance. Without any filter at all, we become anti-social and deviant, but go too far on the other extreme and we lose our own trust and authority that we won’t step over any edge. Intrusive thoughts do not mean that the person experiencing them has desires to do these things. But the ultimate tragedy of living with OCD, is that the person lives in belief that they are precisely what they are not.

As counsellors and therapists we’re used to the system but for many people who walk through that door, it’s the first time they’ve done it and they might be scared. It might be difficult to admit to those thoughts and images. Such is the stigma around mental health that there may be fears around what might happen if these thoughts are revealed: fears of diagnosis, or worse still, a misunderstanding that would lead to being judged or ‘kept in’. It’s so important that we’re mindful of not letting that happen.