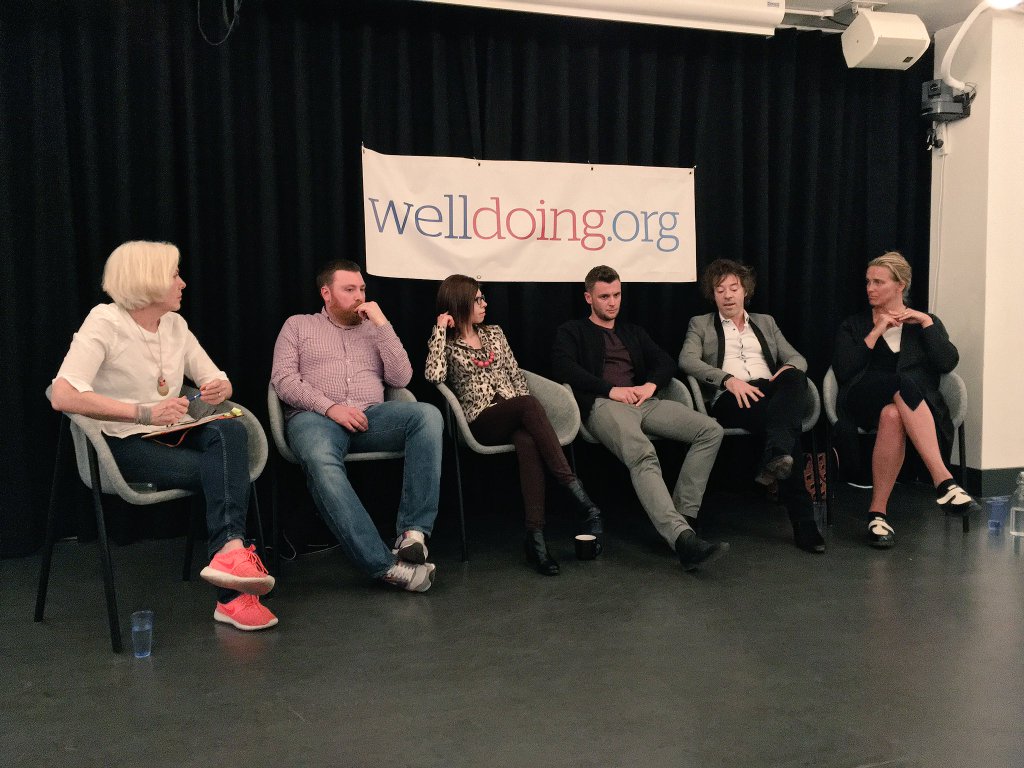 Everyone seems to have a startup these days - and many of those who don't have probably flirted with the idea (or with many, many ideas), and thought 'I could do that'. Yet the reality is that the majority of startups do not succeed. And when you have invested so much of your time, money, life and soul into a business, what happens when it goes wrong? Depression, anxiety, stress and even suicide are prevalent among the startup community, where levels of mental health difficulties rank higher than among the general population.

Welldoing held a talk and panel discussion at Campus London last night to discuss why mental health in the startup world is so at risk and what can be done to protect the people putting themselves on the line.

Sarah Walter, now chief creative officer at Metail, struggled with a deep depression after her company failed despite the £2 million pounds she personally raised through endless pitching. She felt isolated and vulnerable as a founder: 'Exposing yourself all the time and being rejected all the time; it's extremely punishing'.

Integrative therapist Joshua Miles discussed the immense pressure that founders are under. As their sense of self is so tied up in the business, the fear of failure often becomes the strongest motivator, eclipsing all others, as founders strive to protect their sense of identity and self-worth.

Naturally, social media was characteristically raised as a double-edged sword; 'There are so many success stories out there, and a harmful lack of honesty about the real struggle to get there. It's made to look much easier than it is', remarked Michael Acton Smith, founder of children's game company Mind Candy and now co-founder of mindulness app Calm.

James Routledge of Potential VC was the youngest member of the panel. He embarked on his founders' journey after watching The Social Network in the second year of university and becoming convinced he could make millions, and agreed that the perception of ease is a real problem. If it's easy, the onus is on you if you fail, and he personally struggled with the idea of seeming weak - to his friends, his employees, his investors. 'It took panic attacks on the Tube to make me realise I needed to look after myself'.

Elitsa Dermendzhiyska, co-founder of Grant Central and Hi Harvey, describes herself as 'sensitive, passionate, incredibly driven, and secretly always convinced I'm not good enough'. Elitsa struggles with imposter syndrome, which is more prevalent among women than men, and is characterised by an inability to internalise your achievements or success; it makes you feel like a fraud. 'If your startup is tanking, you see it as proof that you were always right and are not good enough. If your startup is skyrocketing, the voice in your head whispers 'Wait...until they find out'".

So what can be done to help relieve these feelings of guilt, stress, anxiety and depression? Both Routledge and Acton Smith credit meditation - or 'mental fitness' - with changing their lives for the better. Sarah Walter enthuses about the value of finding 'safe places and safe people'. For Elitsa, there is nothing more powerful than spending time in communion with nature. She has travelled the Camino de Santiago several times - a 30 day pilgrimage covering 800km in Spain. Even more than being in nature, she extols the conversations she has with strangers she meets on these walks, where no one asks you what you do.

All the founders agreed that talking to someone who is outside the business, be that your partner, your family or a therapist, is hugely important. But not becoming defined solely by what you do, and remembering who you are and how you feel, is perhaps the strongest lasting message to take away from the talk; 'We're human beings, not human doings' - as succinctly put by Sarah.

Joshua Miles urges founders to not feel guilty when they take a day - or even a morning - away from their laptop: 'You can only sustain that for so long before it manifests in some sort of crisis, be that stress, panic attacks, depression or a breakdown. Founders would benefit from accepting that by taking care of themselves, they are taking care of their business'.