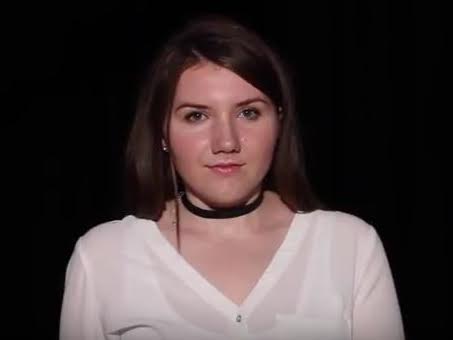 How I Channelled My Lifelong Depression into Poetry

Louise Bown, 20, is a youth worker at the YMCA in Sutton Coldfield

I’ve always had low self-esteem and a bad opinion of myself. Now I realise it was my mental illness talking.

I suffer from depression and anxiety. From as young as five I remember feeling really bad about myself and thinking that I wanted to die. I was shy, reclusive and very quiet in school – I felt isolated and alone.

When I was about seven, I saw a shadow in my room and it terrified me. For weeks afterwards I couldn’t sleep because I thought someone was in there. I told my parents that I’d seen something but they didn’t understand how much it had affected me.

They had to take me to see a psychiatrist, who worked with them on ways to sort out my disordered sleeping patterns.

I was referred to a clinic and learned some different coping mechanisms – like my mum reading me a story before going to bed, staying with me before I went to sleep and checking on me during the night. It was a long process, but it did eventually start getting better.

My mum had concerns about me but I think she put it down to me being shy, and I think people generally do – they don’t realise that children can suffer in that way. When it comes to mental health people tend to think that it only happens to older people because they have more to worry about, but children can be affected too.

It’s very easy for them to be influenced by what’s happening around them and become ill.

My mum had post-natal depression after having me and I think it’s something I was susceptible to growing up. When you have a child it’s important to bond with them but because of what my mum was going through she couldn’t. I felt like there was something really wrong with me because I wasn’t close to my mum the way other people were.

The feelings of self-hatred stayed with me through my childhood and teenage years. I would go through phases of feeling low and having anxiety attacks and I had no self-esteem.

School was tough because I was very anxious and shy so it was difficult for me to open up to people. Exams would trigger my symptoms and make me feel really stressed.

When I was 16 I was prescribed antidepressants and went for Cognitive Behavioural Therapy (CBT) to help me cope with everything.

I still take medication now and writing poetry has provided me with a creative outlet.

I decided to make a film with Fixers, the charity which gives young people a voice, during which I recite a poem that I wrote about my experiences of depression and anxiety.

I want it to show people that you can get through mental illness – it’s a part of your life but it’s not all that you are.

It’s important to have someone you feel you can talk to when you’re struggling. Confiding in someone that you know understands, respects and loves you can really help.

I know I’ll always have depression and anxiety but I wanted to use my experiences for something good.