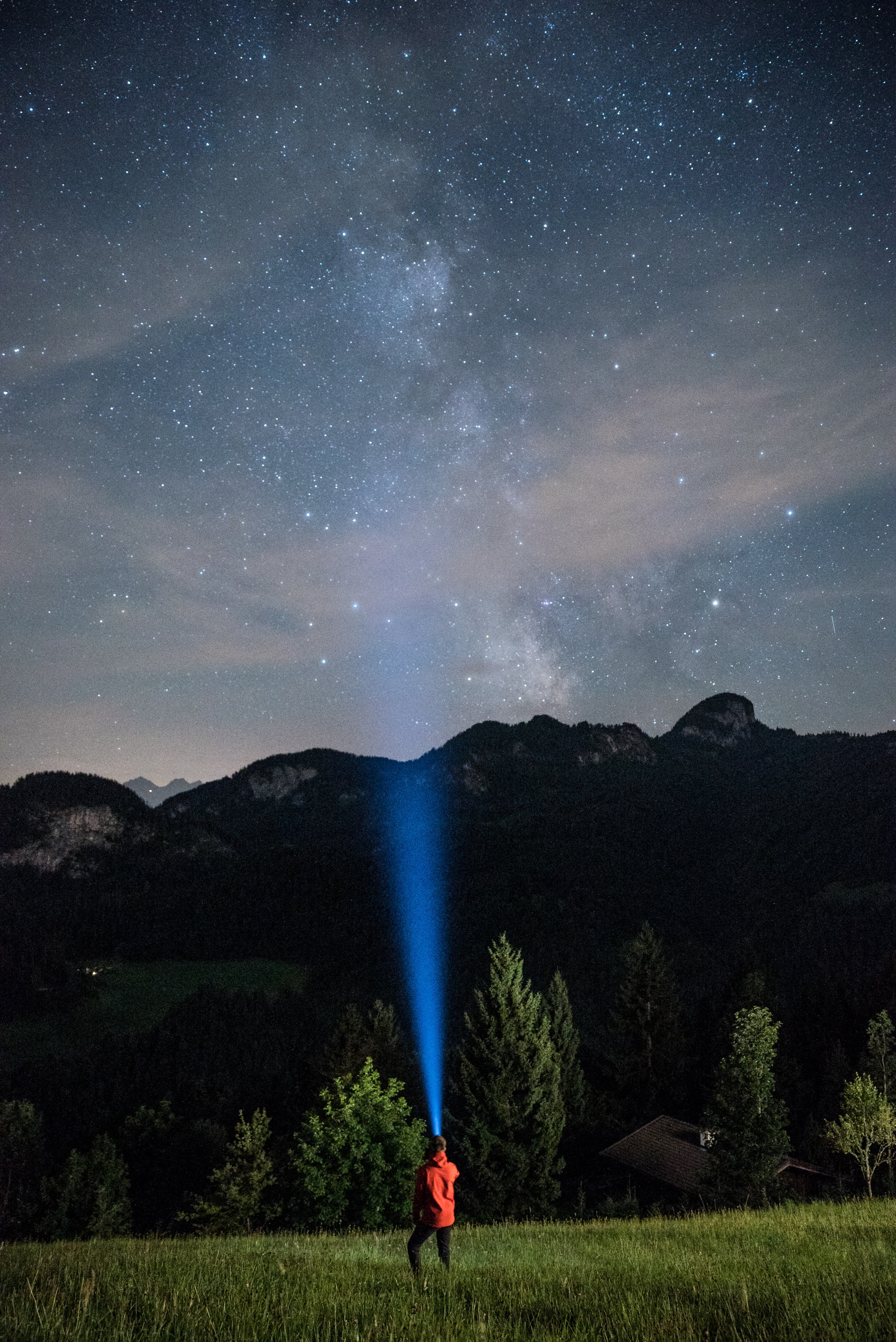 How Night Running Simplifies My World

I pick my way through the shattered wall and approach the trig point. The night is clear, the moon is a couple of nights' shy from full but the light is bright enough that I have my headtorch on its dimmest setting. I arrive at the trig point, walking the last few steps, fold my arms and rest against the cold brick, its institutional cold seeping into my arms via osmosis. I am looking west from Scout Scar towards Whitbarrow Scar, the Kent estuary to my left is lit up by the moonlight. My view obscured by my rapid exhalations in the cold night air. In the void between the two limestone escarpments a few lights interrupt the coal tar black. To the left cars on the A590 and directly in front the kitchen and living room lights of a few farms and homes, occupants comfortably tucked in for the night. I switch my headtorch off, absorb the view and, as my breathing slows, the silence.

Running at night simplifies things. I spend my days scanning my periphery, looking, listening for perceived threats, my senses attuned -- to what? Nothing, everything. During daylight that is a large amount of data to process, assess, work out what if’s, scenarios, managing my anxiety. My periphery defining the area of perceived threat is huge, my senses attuned, sharpened to the slightest sound or movement, each one recognised, assessed, mitigated.

But up here, there is silence, tonight the air is still, the temperature dropping close to zero, I can feel the ground beginning to harden underfoot but it is too early to see any visual signs of the frost to come. When I move there is the sound of my feet on the ground, manmade fibres rustling, my breath and the occasional muttered curse.

Visually I am at the base of a teardrop puddle of light, my periphery tonight is ten yards, depending on the conditions it could be as little as two. I have chosen the periphery to be ten yards, I could turn up the volume and illuminate a lot further in front of me but that would defeat the object.

During the day I am bombarded with visual and aural stimuli. To make life easier I choose to ‘denude’ some of my senses. I often wear ear plugs, they reduce my aural input by thirty percent, it makes films/shows/crowded spaces bearable, less of an assault on my senses, less data to process. They help to block out small talk, chatter, stuff that is by and large irrelevant but still needs to be assessed, once noticed.

Noticed is important, once noticed it needs to be attended to, unnoticed it is not a problem. Even low risk activities can be involved. On a day of high intensity even the act of reading or listening needs to be simplified. At the writing group I will often close my eyes, not reading the work, just concentrating on the words, reducing stimuli, distraction, simplifying, allowing my brain to relax, focus.

Being able to relax mentally is a wonderful feeling, a release.

I switch on my torch, I am bombarded with flecks of light, thousands of reflections, rain and water droplets cascading down in front of my eyes. I turn the volume down, but the reduced volume of light fails to resolve the issue, my periphery is a couple of yards at best. I drop off the back of Cunswick Scar, leaving the cairn behind and pick up the narrow path that contours round the back of the scar. Being narrow it is easy to follow, there is little wind so no matter which direction I run the result is the same, poor vision, so I concentrate. I run through a flock of sheep, the light does not disturb them and my form is just a shadow so they regard me with unfeigned indifference, forty glowing pairs of eyes looming out of the dark, a sheep zombie B movie.

I am on the broad path that leads to the kissing gate, broad is great in daylight, but tricky when you have less than two yards of light, not so tricky when you concentrate but a couple of lapses and I am picking my way along sheep trods. I’m not lost, just ambling in an almost right/almost wrong direction.

That’s the beauty of night running on the fells, the need to concentrate but concentrate in a small space. It is not about speed. I am running a minute a mile slower than my daylight pace. You focus, focus on the track, focus on your foot placement. The perils are similar to running during the day, wet rocks and roots are bear traps waiting to break your ankles but everything is confined, rigid boundaries. The main difference for me, at least, is losing depth perception, our eyes, similar to autofocus systems on cameras require an element of contrast to perceive depth and that is reduced with minimal light. The result is an occasional smack as my foot hits the ground early or an ungainly pitch forward as I misjudge the depth of a depression. As you move in to the season you rely on the sense of touch through your feet, feeling the undulations, the exposed outcrops of a route, safe paths through the copse at the transmitter, relying on muscle memory in your feet as much as visual perception.

It might seem odd for somebody who perceives threats around every corner that I find solace and peace when swathed in a blanket of darkness. I have no idea or concept of what could be out there in that darkness. But my concern is with what I can see and hear. Up here, even just a couple of hundred of metres above Kendal my need to monitor is reduced. I am like the cat that when it sees you slinks under a car, if it can’t see you then it is safe, even though as a potential threat we know where it is.

My favourite night runs are early or late in the season, when you start on the cusp of darkness. I aim to get on the first top just as the light fades, preferably without using the head torch, then by a cairn or trig point I just let the day go, losing the colour, then the depth, finally resorting to shadows as I switch my head torch on.

Early mornings are a poor second, although it is great to watch the light rise and the day begin it is the knowledge that as I descend back in to town the shitstorm of visual/aural overload is about to begin.

I have lost track of time, but I know I have been out for over an hour, I feel good, chilled, both physically and psychologically, so I head for home. I arrive at the gap in the wall at the bottom of the fell. It marks the boundary between Cunswick Fell and the pasture that leads to the bridge over the A591. Light rain is beginning to fall so I pick up the pace. During the day the field represents an easy run in to the end of a run. But the path, a worn strip of grass, is easy to lose if you let your mind wander. So I focus, pushing the pace. Pace is a relative concept at night on the fells. I don’t run physiologically fast, just cognitively fast, processing the limited data, concentrating on foot placement. The technique is to look a couple of yards ahead, memorise the placements, make those steps from memory while processing the next few yards.

I cross the road and climb up the fell towards the golf course. I have a choice, I can skirt round the greens picking up the footpath leading to the lime kiln on the Underbarrow road or chose the descent down the fell and through Serpentine Woods. Night running isn’t about heroic descents, well not always, so I choose the golf course route. The lush thick grass is surprisingly wet and I feel the damp penetrate the fabric on my shoes. I find the path leading through a small copse on the top of the golf course, a broken wall, wet tree roots and some cloying mud to negotiate and then a few yards later I am on a wood chipped track for the descent to the lime kiln.

Running at night requires a state of mind, the ability to be there, feeling, sensing, It is truly mindful, of the moment, recognising where you are. I get a strong sense of place on the fells at night, not geographically but my sense of place, in my puddle of light, my ecosystem, my boundaries. I am my own tiny planet in a universe of other discreet systems, planets that I cannot see, barely sense their gravitational pull, lightly tugging, in my head.

I arrive at the lime kiln, turn left, heading home.