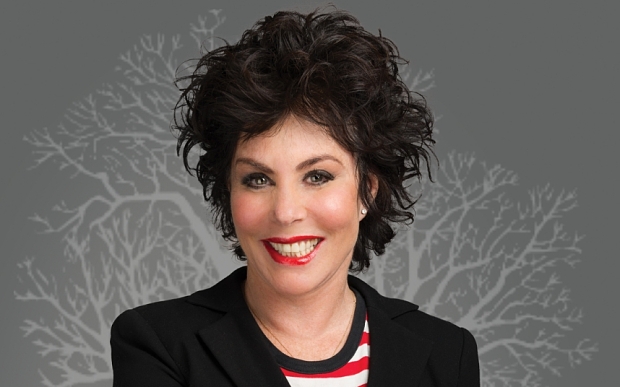 Ruby Wax is now as well-known as a campaigner for mental health as she is for her comedy career. Having suffered from depression herself, she trained as a psychotherapist at Regents College, and then did her Masters in Mindfulness-based Cognitive Therapy (MBCT) at the University of Oxford. Her book Sane New World: Taming the Brain is a bestseller which she has turned into a one-woman show; it is still touring the country to great acclaim. And yesterday her new book A Mindfulness Guide for the Frazzled, focusing on the benefits of mindfulness, was published.

Frazzled is great Ruby, it explains mindfulness and its effect on the brain so that anyone can understand it. And it’s funny too!

If you use humour it goes straight into people’s brains, because you’re softening them, making them comfortable, and then you hit them with - this is how you do it! In the book, I’ve simplified how to learn mindfulness, into a six-week course. I’ve made it a much easier course than normal, but it is fully sanctioned by Mark Williams [former Director of the Oxford Mindfulness Centre, who developed Mindfulness-based Cognitive Therapy]. I wanted it to have the correct neuroscience and to appeal to lots of people.

How do you use mindfulness in your everyday life?

I probably do it more than most. I start with 20 minutes when I get up, but then I do it a lot in the day too. It might be when I’m being driven somewhere, or waiting on the phone, in a queue, before and after a show. To put it simply, what you are doing is taking your focus to what you’re doing - breathing, sipping tea, walking. And that stops the chaos from coming in.

Do you use any of the popular mindfulness apps like Headspace?

I think apps are better than nothing, but you won’t always have your phone handy, so I feel you should learn by yourself. It has to be regular practice [sitting quietly, for a specific time, focused on breathing or simply being] or you won’t build the muscle to deal with the tough stuff. When the shit hits the fan, good luck getting into your body, and stopping rumination. You won’t be able to do it if you haven’t built the muscle to be able to navigate the noise. But if you have, you can cope.

Why do we need to do this? Are we all trying to do too much?

Yes! We try to do too much — keeping up with social media, the news, constant distractions – and our brain is so brilliant that we daisy chain it all so that we can still be awake at the wheel. But then that becomes a habit, and we’re still daisy chaining all our thoughts and worries without wanting to. We don’t know how to close it down, and it overwhelms us. Distraction is a huge problem for everyone.

But what about loneliness? People feel connected with each other through the internet.

If we had more community – actually spending time together – we wouldn’t need mindfulness. That’s why I’m starting walk-in centres during the London shows I am doing later this month, and continuing them afterwards. Every Wednesday there’ll be a place that people can gather and meet. It’s my new mission, like AA, where people can get together and alleviate the loneliness.

What would put ordinary people off practising mindfulness?

The word! What is it supposed to mean? I like to call it a mind gym. If you exercise upstairs, the repercussions aren’t just being present, but there’s also the effect on the immune system, obesity, certain cancers, ageing, you don’t necessarily get dementia. It’s amazing. And you get the best results for depression.

You suffered a recurrence of your depression during the time you were writing Frazzled. How did mindfulness affect that?

It meant that I could write about depression and be depressed at the same time. That was an achievement – to be able to stand back and watch it. I didn’t get depressed about being depressed, which I usually would. Depression still hurt like hell but my recovery was quicker.

As an entertainer do you think people expect you to be honest?

Are you kidding? It's the opposite. Being open about mental illness would hurt my career. So I don't have that career any more. Now I have a sort of hybrid —- entertainment and mental health. I’ve now introduced mindfulness into the Sane New World show, so it ends in silence - not bad for a comedy show! Then uproarious applause - that I was surprised by, and pleased about.

Sane New World is at the Arts Theatre, London, 19 January to 13 February