How to Fall in Love without Losing Yourself

Love is real. So no matter what, the love you cultivate in this relationship will remain with you. Anchor in the truth that regardless of where this love takes you, your capacity to love has already been exponentially widened. This love, if you let it, already has the power to add more life to your life, no matter the outcome—commitment, long-term partnership, or a more fleeting, comet-like love that blasts a crater-size hole through your heart and lets you love larger for the rest of your life. This love, whatever it is or turns out to be, is a gift. All it takes is you choosing to see it as this from the very start.

Our model of love has been ruled by some seriously misguided maths for far too long. In order for one plus one to equal one in the love relationship, one person has to be subsumed or sacrificed to make the twosome appear “wed” in a sacred union. But there’s nothing sacred about martyrdom, about silencing one half of a divine duo that should equate to more life, not less. Instead of one plus one adding up to one in the love relationship, I think what so many of us are longing for is a love that allows for one plus one to equal three. Let me explain.

When one partner allows her or himself to be overshadowed by the other, eventually that relationship will die.

Talking to a group of friends, we were commenting on the conflicting twin desires of falling madly in love and also remaining alone. One friend in particular shared that she has been alone most of her life because of a deep-rooted belief that if she falls in love she will be consumed by her partner and lose the precious time she has to herself, to her thoughts and to her dreams. In the course of the conversation, she revealed that her mother was only just now beginning to “reclaim” her life in her mid-fifties. And she felt like some part of her vowed as a little girl to never lose herself to begin with, which then on an un-conscious level has forced her to sabotage any potential long-term relationship because it equated to the loss of her true self. And even though she had grown lonely, and felt unchallenged by her single status, she preferred loneliness to getting eclipsed.

As much as the romantic in me swoons at the idea of becoming one with someone else, and as much as a total eclipse of the heart sounds awesome in theory (and on the dance floor), it’s just not real. Two individuals joining to become one individual is not realistic. It doesn’t work. That’s why when one partner allows her or himself to be overshadowed by the other, letting more and more of their soul’s real needs to be usurped and undervalued in the relationship, eventually that relationship will die.

Love doesn’t ask for a subtraction or a negation of who we are. If that’s what you’re feeling or experiencing in a love relationship, it’s important to question whether this “love” is more about fear. Love asks us to be all of who we are. Love asks us to let go of the egotistical limits we’ve placed on our lives and become more, not less. Rather than having a limiting belief that love holds the power to eclipse the true self, I believe love is best represented by the image of the vesica piscis: 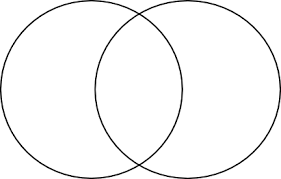 The vesica piscis is an ancient symbol of sacred geometry that is linked to Christian mysticism and Kabbalah. The two circles share the same radius in such a way that the centre of each circle lies on the perimetre of the other. The wisdom of this image suggests that when two individuals come together a third is created. Each circle maintains its own integrity. And yet, they overlap in a way that the vesica piscis, the egg-shaped circle in the middle, is created. One plus one equals three. This can only be possible, though, if each remains true to themselves - if they maintain their own boundaries by being honest about the desires and needs that cannot be compromised.

Love so often comes in and illuminates what is actually real for us, which can be shocking and disorienting. Those fictions we have believed about ourselves for most of our lives get challenged. And this can feel uncomfortable at best, terrifying at worst. But the function of love is to expose that numinous core of who we are. It’s meant to burn away what isn’t real. So as I fall truly, madly, deeply in love with another person, I hold tight to trusting that what is real will remain. No matter how this love unfolds, the truth of who I really am endures. And so I can fall in love with less gravity and more grace and hopefully much more fun.