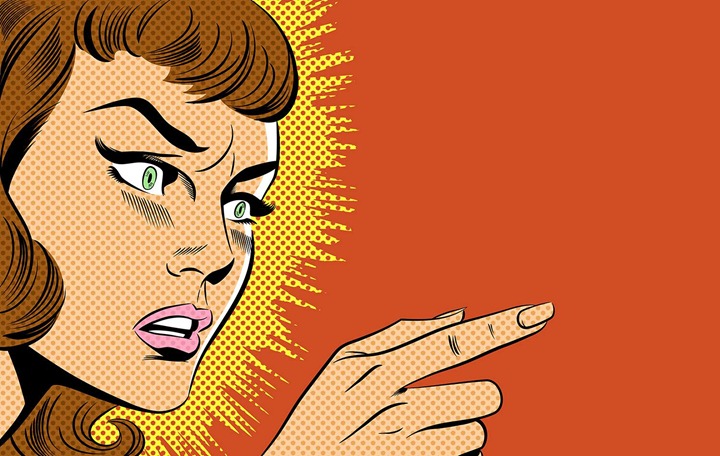 Why Women Should Get Angry

‘Sugar and spice and all things nice/That’s what little girls are made of’ goes the old nursery rhyme.

But what if you’re not feeling ‘nice’? What if you’re mad as hell and don’t want to take it any more? It’s hard to be nice and downright furious. Anger is not a ‘nice’ emotion. Whether down to society’s conditioning or not, many women never let themselves appear overtly, up-front angry. Even on a bad day when it’s raining, the train’s late, you lost your keys, and there’s yet more scary stuff in the media. But the trouble with constantly playing nice is that, given enough stress, pressure, exhaustion, you can flip over to ‘nasty’ without ever touching, say, assertively annoyed, in between.

In the modern world, stereotypes are breaking down. But the process of allowing women’s anger is definitely one step forward, two steps back. For every positive model of furious womanhood – Beyonce’s Lemonade comes to mind – there’s a knock-back in the form of Donald Trump calling Hilary Clinton a ‘nasty woman’ for assertively countering his insults and attacks.

Women are far more likely than men to ‘internalise’ so-called negative feelings like anger, annoyance and rage -  literally turning it inwards on ourselves. Hence a range of behaviours from constantly apologising for things that aren’t our fault to the epidemic of self-harm. Whereas furious boys are more likely to pick a fight and externalise their frustration, girls cut themselves. Or develop eating disorders. Or depression - a complex condition which many theorists see it as anger turned inward.

Of course men get depressed, self-harm and suffer disordered eating as well as women, just as two out of five domestic violence perpetrators are women. But researchers find that the generalisation holds true – that while boys on the whole use their fists, girls tend more towards sulking, criticising or using destructive gossip. Girl bullies use these tactics more than boy bullies do.

Angry females become expert in the art of indirect hostility. Sarcasm, put-downs, ‘being a bitch’, bottling it up, ‘the silent treatment’, criticism, ‘cold shoulder’, blaming, ‘ghosting’ people, even crying – turning anger into more acceptable sadness – are all common ways women handle anger. Then there’s the ‘wolf in sheep’s clothing’ style. Like you feel your mother-in-law is getting at you in an hostile way, but it’s hard to pin down how exactly and if you say something about it she replies ‘Noooo, you’ve got that all wrong. I didn’t mean…’

Even a headache can be a sign that deep down you’re in a bad mood. And while I’m not suggesting all of these are wrong – sometimes going quiet is the most sensible tactic – if they are the only tools in our anger toolbox there’s a very good chance we’ll never get taken seriously.

Part of why we handle anger differently is that girls are socialised to be ‘relationship caretakers’. And it’s an emotion which, when out of control, can be a destructive force, hurting people in ways that make them turn away from us and ruining relationships. But pushing it down isn’t a great alternative. Google ‘suppressed anger and…’ all kinds of undesirables come up before you even finish typing: ‘depression’, ‘anxiety’, ‘drinking’ and ‘panic attacks’ for starters.

As with all emotions, anger is a part of life and we have it for a reason. Its original purpose was part of the ‘fight or flight’ response that evolved to help us deal with predators. And when we’re riled now it’s because we feel threatened.  Which we do when there’s something we truly need or deserve and aren’t getting, or someone’s treating us in a way that lacks respect or even common decency. Anger is what enables us to say ‘this is not OK’. For that reason it can be a powerful force, hard to harness -  even the phrase ‘losing’ our temper suggests we’re out of control when angry.

On a psychological level it is a big hint that something needs to change. And if it isn’t resolved it festers. The US psychologist and researcher Dr John Gottman claims to predict with 90 per cent accuracy which newlyweds will divorce four to six years on by observing how they deal with conflict. Specifically, how the individuals react to anger and whether the couple can resolve or ‘get around’ the conflict. Unresolved anger in an intimate relationship is a notorious passion-killer. Smouldering resentment is the very opposite of sexy.

So there’s a lot at stake in not letting someone know what we’re angry about.

Listening to female clients who are fuming, I’m struck by how many don’t feel they can bring it up with the person concerned. What psychologists and therapists call ‘triangling’ – using a third person to convey your message to whoever you’re upset with or just plain complaining to a third person while the partner, say, remains blissfully unaware is another common way women spread exasperation around. But, usually, of course, nothing changes and frustration builds.

Although talking to a third person - if that person is a therapist - is helpful. Knowing where your anger comes from and what’s really causing it (not always the same as what you think is causing it) can be a revelation. Plus a therapist or counsellor can be a sounding board to help you learn what to say and how. Sometimes the person you’re angry with is no longer around, or is very much alive but becomes plain impossible if you so much as frown at them. A narcissistic parent, for example, would go into a rage if you dared ‘criticise’ - which may well have something to do with how you learnt not to express anger as a child.  But if you weren’t taught how to harness and contain your own anger in childhood, you can still learn that skill as an adult. Therapy can speed that process. Moreover if you get angry with your therapist and can talk about it, discovering the world doesn’t end when you do can be enormously liberating.

Getting angry doesn’t have to mean you flip from ‘nice’ to ‘nasty’. You can move into ‘neutral’ and state your case in a level, straight, adult way. Practice makes perfect. So if we really are metaphorically made of sugar and spice, let some of that spice be pepper.