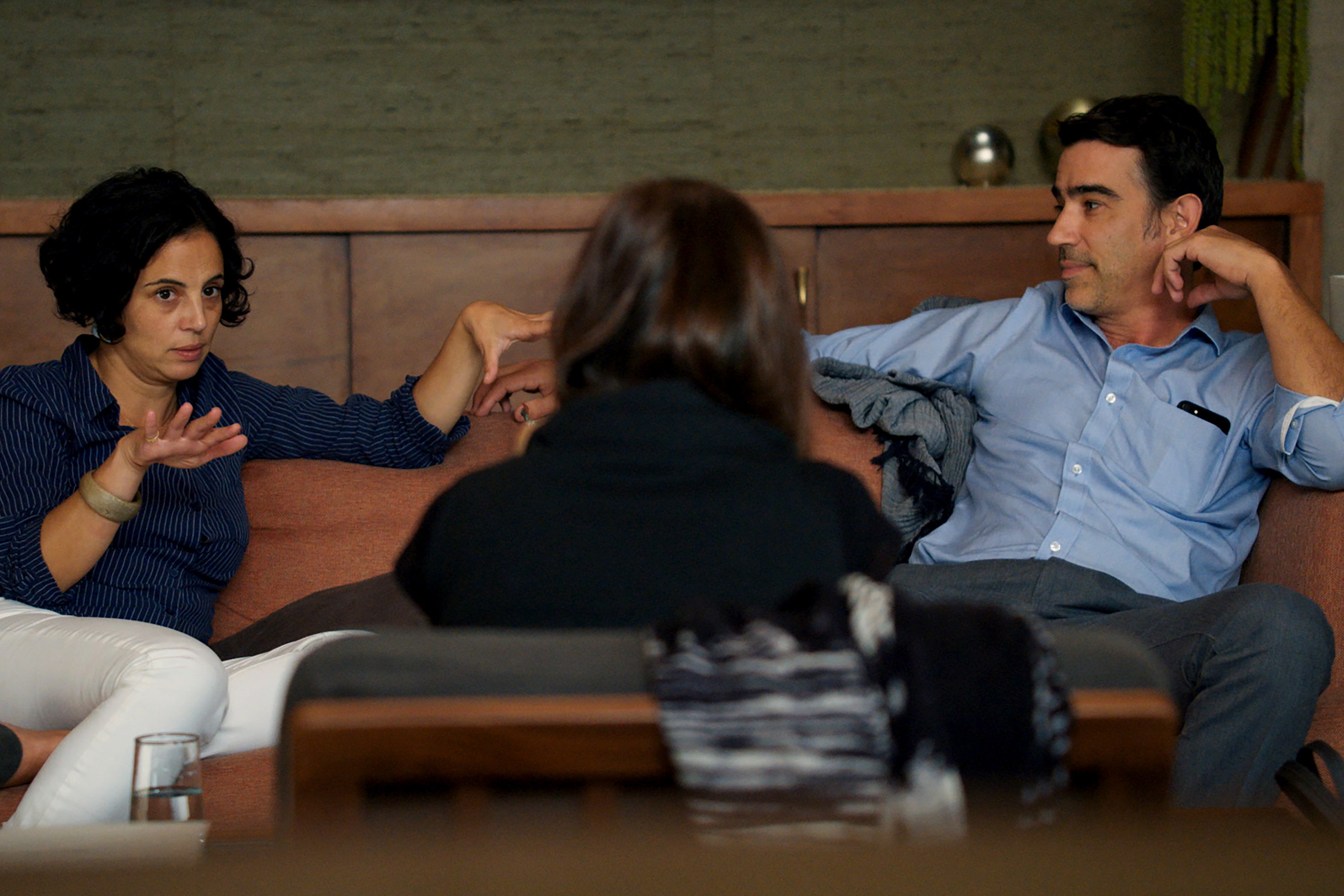 What a Therapist Thinks of 'Couples Therapy'

I was at engagement party in Central London recently, and a guest approached me and said: “Have you seen Couples Therapy?”

“Yes” I replied, even though my attention was distracted by the nibbles that had just been placed on the table next to me, tantalisingly out of reach.

She continued, “I think it’s actually worse than pornography. It made me feel queasy. All those people talking about their relationships.”

Momentarily I felt guilty. I had rather enjoyed watching the first few episodes. Was I secretly enjoying the opulence of the penthouse style therapy room? Or did I like the fact that an aspect of my hidden world of seeing couples was in full-view, thanks to Orna Guralnik and her crew?

Still, I did feel rather disturbed by the programme. After all who would be willing go on TV to talk about the intimate details of their relationship? Grisly and unedifying are thoughts that come to mind. The opposite of the sweet feel-good First Dates. So, there is something going on that these couples willingly took part. Did they believe that the crew was their surrogate 'good' family? Did they hope the TV audience would adjudicate; understand them; heal them; know them? Was it voyeurism, or a brave development in our culture?

Back to the party. I still hadn’t got to the nibbles. Nevertheless, the chilled Albarino wine was flowing freely. Clearly the newly engaged couple had unleashed something into the air. Another guest approached me. “You seem to be getting on really well with my husband. Could you see him for therapy?”

“I’d happily meet him for a cup of tea. But I can’t see him professionally, because I know you, even if it’s only been for five minutes. In any case why are you trying to find therapy for your husband? I guess it might be more interesting for you to think what drew you to him and explore that.”

At that point I managed to get myself to the delicious nibbles before they were gone.

We spend our lives hoping to find the magical 'other', believing this will change everything. Then we find them, and the magic wears off, and then we start our next quest to change them. If only they were different, then everything would be OK.

Orna, the therapist at the heart of the series, is onto this. She listens intently for her couples to get out their score cards, and to decide who is at fault where, and how many times. She is frigid and controlling, and he is lazy and deceitful, and so the usual relationship tropes are thrown around. But, like any good couples therapist, her patient is the couple. Something must have brought them together, consciously and unconsciously. To one seemingly hen-pecked man, who can’t seem to get a word in, yet is smirking, she offers, “so you enjoy getting attacked and humiliated?” noticing the pattern in the relationship. He is not a pure disinterested bystander. His indifference is part of what precipitates his wife’s anger.

Orna’s psychoanalytical and systemic orientation means she is alert to the unconscious patterns constellated by the couple, and how much they may be invested in them. It takes two to tango. There is no magical other.

Orna has a dual identity. She has a prior degree in film. We can see this production as a confluence of her interests. She has become a film maker and analyst and her patients have become her cast. Is this her unconscious at work, or theirs? Has she achieved a creative synthesis, or has the series watered down her craft?

Personally, I choose never to write about my patients. It’s private! Some analysts write about their patients, with their consent, in heavily disguised form to further clinical knowledge. Exceptionally, I know of analysts who have co-written books with patients. Both analysts and patients write personal memoirs. It’s a complex area, and reams of papers and books have been written on the impact on the analytic relationship.

Orna is a pioneer, and the co-production with her patients is a serious undertaking. She looks at the couple as a system. She often implores them, “let me do some work,” in order to dismantle the system that the couple are perpetuating. She notices her own biases, as she discusses the couple with her supervisor. She notices when she is taking sides, or when a member of couple is about to run out the door and stop the process in its tracks. She is attuned to the complex dance of the couple, without rushing into answers. She notices when the past of the couple is projected into the present moment. It seems like a valuable experiment. For individuals and couples watching it is illuminating. It allows room to allow for the fact that the couple has large areas driven by the unconscious.

A therapist colleague once told me a story. A patient approached a revered couples therapist at a train station, with the intention of thanking her for her writings and musings. It had helped him save his relationship! She replied, “Fuck off! Can’t you see I’m having an argument with my husband!”

What does this story make you think? Do you think, well that shows that the couples therapist is a charlatan, a fake, a hypocrite? Surely, a couples therapist wouldn’t shout in public at train stations? Surely, they wouldn’t lose control like that? At least they’d find a private room to do their shouting in! Perhaps she needs to see an anger specialist? Or maybe she needs to move on! Maybe they don’t have enough sex? Maybe they have too much sex?

You will be known, and know another unlike any other relationship. Sexually (even if you don’t have sex); biologically (your breathing, digestion, functioning); psychologically (what’s really under the bonnet and what you don’t even know is there). And there will be things you encounter in your partner, which you never thought you would ever have to face, or may have even spent your whole life avoiding.

For some people this type of encounter holds a special value. What is your material, what is their material, what is joint material? What do you have to sacrifice to be in the relationship? What suffering does it put you in touch with? Long-term relationships can be a particular type of torture, but one that may come with certain hard earned satisfactions and ecstasies. In our extroverted culture, which measures things by outer symbols of success, perhaps only each couple knows the precise value of such a private and particular type of experience.

Ajay Khandelwal is a psychotherapist in London and online

4 mindfulness tips for a healthy marriage

Setting boundaries will set you free: how to beat codependency

Your partner is struggling with their mental health: don't forget about yourself

How does relationship counselling work?