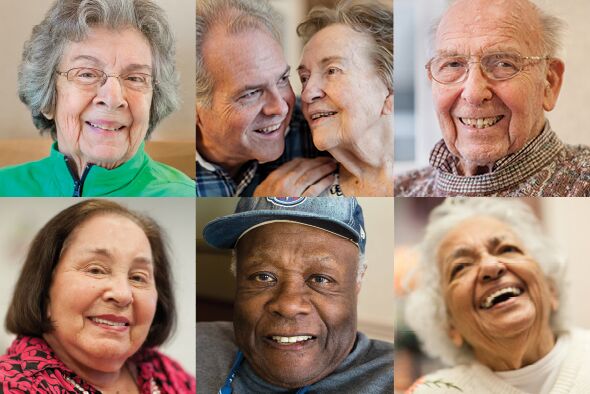 The Many Faces of Dementia

​As awareness of dementia grows, the stigma surrounding the diagnosis is starting to decline and the importance of a person-centered approach is becoming increasingly recognised. Understanding the individual diseases and syndromes that fall under the umbrella of dementia is key: we need to provide each person diagnosed, and their families and friends, with information and support to help them live well with dementia.

The Many Faces of Dementia is a free online course that was created to give a deeper understanding of dementia and raise awareness of the wide range of forms that dementia can take. By hearing the stories, symptoms and science behind four lesser-known diagnoses, learners will develop an appreciation of the many ways in which dementia can affect individuals and their families, and the different diseases that lie behind these changes. We hope this four week course will appeal to anyone who has an interest in dementia, and professionals who interact with people diagnosed with dementia.

Dementia is one of the top priorities in global health and is estimated to affect over 44 million people worldwide. This has a huge impact on individuals and on society, so improvements in understanding, care and treatment are desperately needed. You can learn more about the common symptoms of dementia here.

Learning about some of the less common forms of dementia can provide a unique insight into the experiences and challenges facing many people who live with dementia. For example, familial Alzheimer’s disease is a rare condition, thought to represent less than 1% of all Alzheimer’s disease cases, in which an inherited faulty gene causes the disease to be passed down through a family and affect people at a relatively young age, before the age of 65. This condition highlights less commonly considered issues which are important to understand, such as how dementia affects people when they are in work, and how to support young children who have a family member with dementia.

In addition, understanding the range of symptoms of dementia will help improve how people are treated. In my experience, people who have posterior cortical atrophy (a form of dementia that affects the brain’s processing of visual inputs) often describe a complicated and slow route to diagnosis. Wider knowledge of their complex visual symptoms, such as seeing words as sliding off the page when reading or having difficulty judging distances when driving, may help individuals get the specialist referrals they need when seeking a diagnosis.

The Many Faces of Dementia covers four topics: familial Alzheimer’s disease, posterior cortical atrophy, frontotemporal dementia (in which changes in personality, behaviour and language are most prominent), and dementia with Lewy bodies (characterised by hallucinations, fluctuations and motor symptoms similar to Parkinson’s disease). Each week the course covers one of these topics and consists of two to three hours of online learning, during which learners will see the clinical and personal effects of dementia through filmed interviews, look deeper into the topics by reading articles, join discussions with other learners and take part in quizzes to test their knowledge. These activities can be done at the learner’s own pace, and once registered, learners can continue to access the materials online for as long as they wish.

Central to the course are the interviews with people affected by dementia, including people who have dementia and their family members. These interviews give a candid insight into the reality of living with dementia. The course also features experts from UCL including Professor Nick Fox, director of the Dementia Research Centre; Dr Cath Mummery, who leads several pharmaceutical trials for dementia; and Professor Gill Livingston, head of UCL’s mental health of older people department, who explains a study she led to reduce anxiety and depression in people who care for relatives living with dementia.

In time, we will develop better treatments for dementia and we will have better methods to help people live well with the condition. But these developments will only take place if we improve our understanding of the many diseases that cause dementia, the many challenges that dementia brings and the many ways that people with dementia can be supported.

The Many Faces of Dementia is a free, flexible online course. You can sign up now at here; the next course starts on 11 July 2016, with another scheduled for October 2016.