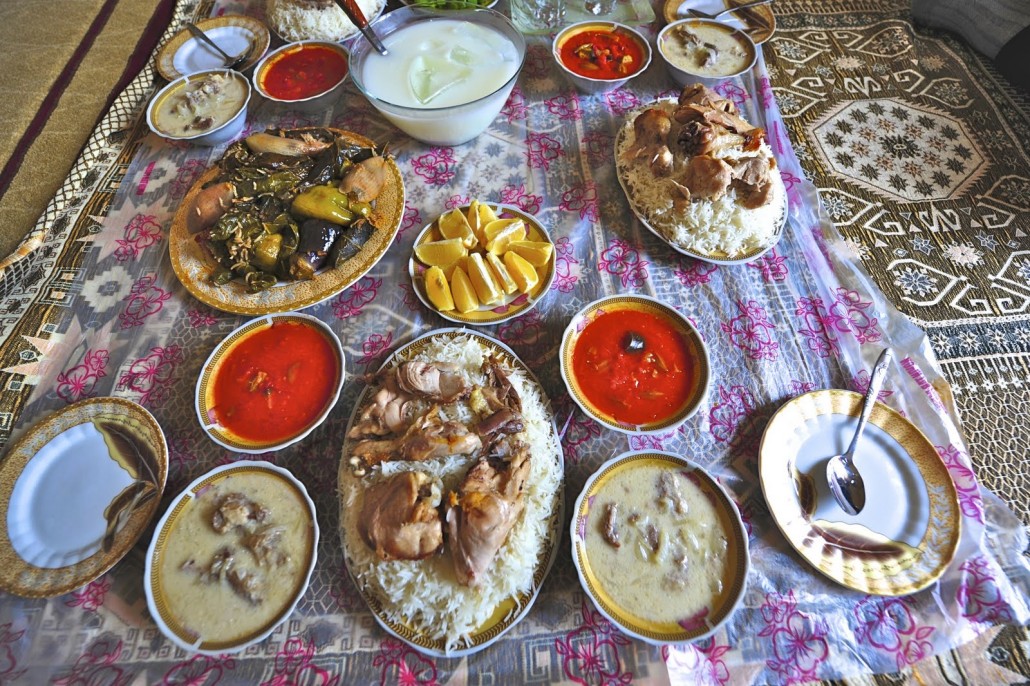 Iraqi Food I Grew up With is Today's Food Fad

Body
Muna Fadhil
culture , family , nutrition
Digestive health is today's big food fad. People today are discovering food allergies they were not aware of; that some foods make you young and others make you age; that changing your job, partner or lifestyle would have fixed your ailment more efficiently than being loaded up on antibiotics.     This food fashion is all over men’s and women's magazines. Flipping through them at newspaper stalls in London makes me realise that their ground-breaking discoveries are my everyday food habits since I was a child growing up in Iraq. Back then I didn't once stop to wonder about or appreciate the wisdom of Iraqi cuisine. I just enjoyed what I ate. So to express my newfound appreciation to Iraqi cuisine – and to add to the food fashion trend  - I'm sharing a few of most common food habits in Iraq and the Middle East and their benefits:

Tahini and dibs dip with bread

My grandmother made it a habit to feed us a dip of tahini (sesame syrup) and dibs (molasses made from dates) served with bread before we ran to school, especially before exams. Tahini is one of the richest sources of calcium and phosphorus, both needed to strengthen bones and teeth. It is high in vitamins E, B1, B2, B3, B5 and B15 which boost metabolism and promote a better functioning of the brain and nervous system. Dates are best known for their fast energy boosting powers as they are high in natural sugars. Unlike bad sugars, such as those found in processed foods, the sugars in dates curb hunger and leave you feeling full for longer. They are also one of the highest providers of potassium which boosts the nervous system supporting cognition and alertness.

An Iraqi lunch usually consists of a heavy meat and vegetable stew served with rice. A bowl of plain yoghurt on the side is a must. My family followed this long before the 'probiotics' craze started. As children when we had a stomach ache or food poisoning my mother would feed us plain rice or boiled potato with yoghurt for a couple of days until we recovered. Yoghurt, among its many other benefits is best known as a source of probiotics or 'friendly bacteria', which provide a necessary boost to the digestive and immune systems. It is also known for it's ability to break down fatty foods for a better digestion and better weight management. Pickles are also know to include this digestive-supporting good bacteria because of their fermentation process. They are served with every lunch and dinner in Iraq.

Fresh red onions covered in sumac spice are a must with kebab or any form of grilled red meat. Sumac is a maroon-red Mediterranean spice powder extracted from the fuzzy sumac leafs. It has a tangy citrussy taste. Health-wise, sumac on onion is the perfect a side with red meat. Sumac is known as an antibacterial and anti-fungal agent to reduce the risk of salmonella. Onions are known for their anti-inflammatory, antibiotic and antiviral powers. Both sumac and onions also have strong antioxidant properties and have the power to rid the body, mainly the gastrointestinal tract, of free radicals that can otherwise damage healthy body cells and make us more prone to illness.

The best way to wash down a heavy meal – stew and rice or kebab - is strongly brewed tea spiced with cardamom. Usually a pot of tea for five to seven people will have three or four cardamom pods. To make the perfect cup of Iraqi tea we would press the cardamom to pop it open just a little so the flavour of the seeds inside is fully released. Then we pour boiling water into a pot with the tea leaves and the cardamom and let them brew in the steam from the kettle full of boiling water below. An Iraqi tea set consist of two pots, one big for the water and one smaller placed on top for the tea. Iraqi tea is served in small espresso-sized cups dissolved with the boiling water. Cardamom is known for its power to sooth digestive problems including heartburn, intestinal spasms, bloats, constipation and signs of Irritable Bowl Syndrome IBS. Black tea is also known to support the digestive system if taken in moderation in addition to its benefits of boosting alertness – especially after a hearty Iraqi meal.