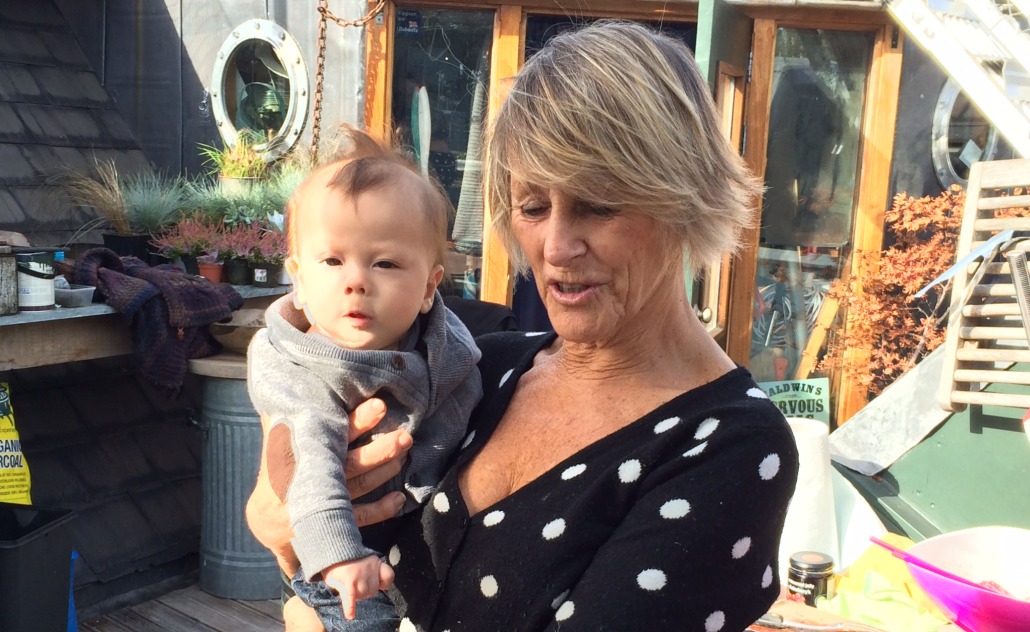 I was pleased when my son and daughter-in-law announced they were expecting, but I had no idea what a transformational rite of passage it would be when she became part of our family.

How much love would be unleashed, how it is to see her little personality shaping itself and to have a soft dough hand thrust trustingly into mine and The Old Man's as we stride down the street with her, pausing to examine dogs, doorways, shop, windows at her command. In fact I fear I've become a sentimental old bore whipping out my smart phone if someone as much as enquires politely how is Isana, displaying a run of photos of this irresistible part product of my gene pool. I'm not alone.

Many of my friends, who, too, have found themselves in this new generational place are just the same, just as tedious as any new parent, just as sure their grandchild is a bit extra special. What confounds me and my equally besotted friends is the way becoming a grandparent makes sense of being older, giving us a shiny new place in the outside world. Filling the inside world with pleasure in this new person's existence, an enormous sense of a meaningful future stretching out.

Getting our hands dirty with children can be the difference between sinking into a sense of futility and depression as researchers have found. Indeed several studies have linked increased life expectancy with being a grandparent. Researchers found this type of close-knit bond was linked to fewer symptoms of depression for the seniors and the closer the emotional ties, the bigger the benefit.

There are signs that we are being drawn back to the kind of hugger-bugger extended families of the 1950s where several generations sharing a home can be a gain. I hear the shudders in the auditorium from those of us who have spent years striking out for autonomy, but let me tell you, it's not such a bad idea.

A dear friend whose husband waltzed off with what she describes as 'a tacky infra-dig blonde' (no way for a woman to talk about another you might say, but hey...) and she was left literally holding the baby. Her mother who had helped the couple buy a large house in Sussex and lived on the top floor in her own apartment became a stalwart offering daily TLC - sometimes hourly - until my friend was over 'the cad', and throughout her granddaughter's growing years she offered childcare, tea and companionship after school while my friend was at work, and the sense of support a rugged, time-taught elder can offer. Now The Old Man and I have joined this clan.

When my granddaughter was born her parents moved into the flat below ours. But from day one the arrangement has been on a very formal basis. They pay rent and in return have the same privacy an unknown tenant would have. We text or phone for visits and make dinner dates. We knock on their door to collect our granddaughter. It means we can all relax knowing the boundaries are in place, and can be pushed aside when we feel like it. I can't imagine a happier arrangement.

The Old Man and I love the feeling of them in the house, even though we have times of not seeing each other that much. We love the way Isana, when she is bored with her parents, stands at the bottom of the stairs and summons us. And so much more. Of course not everyone who likes the idea can make the arrangement work, but I have been struck by how many people are now moving to properties with room for a 'granny flat'. How wonderful is this idea: if, as is projected, we have some years greater life expectancy than our forebears we may see yet another new generation in our families.

This is an extract from Angela Neustatter's The Year I Turn...: An A-Z of Ageing

Angela's granddaughter Isana has now been joined by grandson Seiji, both pictured above.