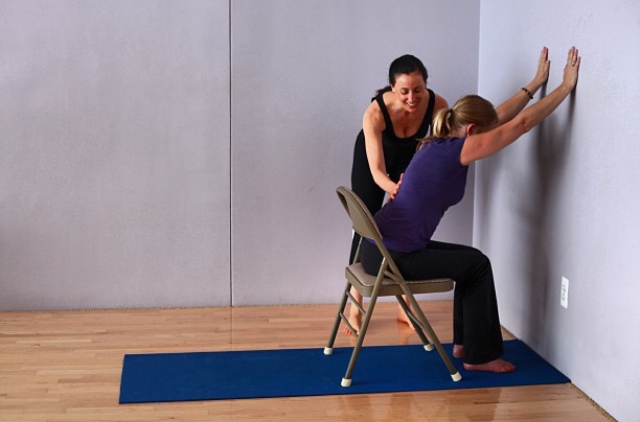 This is Why Yoga Can Help Chronic Pain

Never in my life, when suffering from physical pain, have I said to myself “Oooh I must do yoga to take my mind off it”. However, one woman has got me re-thinking my attitude towards pain, because she says yoga is her pain relief. Now, we are not talking about general pain, this is chronic pain, which derives from the deliberating disease, Multiple sclerosis (MS). The fact that the name literally means ‘many scars’, just indicates how painful this disease is.

But it’s not just yoga, which is helping Christine deal with MS (now in a progressive state), it’s her positive attitude, which enables her to detach any negative emotions she has towards pain. In fact research has shown that emotions such as sadness and anxiety actually aggravates pain.

Teaching yoga to someone with this condition is somewhat challenging, because you can easily break bones or pull muscles. I have had to watch Christine (who is only in her fifties) go from walking with aids, to now being completely chair bound. She tells me she dreads to think where she would be without yoga. When we first started yoga together, Christine was able to get down on the floor and we would do postures such as Child's Pose, Cobra and Cat. Over the years we have adapted the postures as Christine’s condition changed – for example we attempted most of them lying down like Tree. However, we had to modify when she damaged her knees so we used a chair, but then after she broke the lumbar region in her back, we had to modify again.

Since I've known her she has suffered a severely damaged knee from a fall, a broken sternum bone and two broken vertebrae from muscle spasms that are part and parcel of the MS she suffers. The longest she has stopped yoga for is two weeks for each injury. However, she never wants to stop because, if she doesn’t stretch she is in pain, and without yoga she feels worse. So even though her body changes, she has never given up on yoga.

For me, the challenge has been being prepared, because each day you see her she is different. The other challenge has been learning about the condition. I have spent hours/days/weeks studying it so I would understand what I was dealing with. But MS is tough. Everyone seems to suffer differently, and with no known cure it’s hard to find a starting point. It’s a very complicated and difficult condition to understand or learn about. I try and deal with how she feels each time I see her, rather than with the MS.

She is by far the most determined woman I have ever met and, despite her MS, is always upbeat. She never complains about her lot in life and accepts each day as it comes - whether it brings good or bad to her door. Knowing her is humbling. She says her mood is managed by her yoga, and goes as far to say that yoga has helped her to hold back the time a little. Essentially, as her MS changes we face it and deal with the aches and pains together.

The one thing she has always said to me over the years is “I wish I could somehow send a message out there to everyone with my condition and tell them to try yoga, it is such a relief”. Christine tells me that the stretches alleviate the dull aches and pains throughout the body, and adds: “Before we start yoga I feel heavy, tight and stiff, but as the arms and legs are stretched out into the various poses and positions I feel light, I feel comfortable and more relaxed than I can ever explain”. I can vouch that she is so relaxed that I have often lost her during the final meditation, and then had to wake her up to say Namaste!

Obviously the stretches now are not typical yoga poses you see in the pages of magazines, but modifications. I manually lift and stretch Christine into postures that are as close as we can get to known yoga poses. But it works and Christine wants everyone to know it works. In my view, even from her chair, she could teach a lot about yoga, and even more about life. It’s humbling to know that I was initially there as her teacher, but it’s actually her who has been my teacher – in so many ways. MS is an unkind companion but Christine is a shining example of a person that won't be beaten by it and while she's still up for the fight, then so am I.