The Work: Documentary Reveals the Potential of Therapy in Prison
Find a therapist
Find a coach
Join as a practitioner
Log in/register 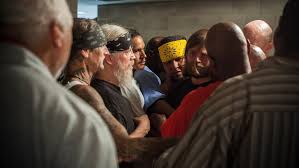 The Work: Documentary Reveals the Potential of Therapy in Prison

For most of us, listening to At Folsom Prison, Johnny Cash's remarkable live recording from the Californian high security jail, with it's songs of prison life, interspersed with convicts' shouts, warders' tannoy announcements and rattling keys, is the nearest we are likely to get, or want to get, to such a penal institution. Until now. The Work, an extraordinary, raw and revealing documentary made by novice Jairus McLeary and only second time full-length documentary maker Gethin Aldous goes inside Folsom once again. This time it's not music that speaks to the souls of the the most dangerous and violent 'Level Four' prisoners but group therapy. For the past 17 years a programme of group therapy has been run at Folsom which takes place over four days. Every other year 'civilians' are invited to join the intense process.

The Work focuses on three of the civilian men (it is a film comprised solely of men and made by men) and follows their four-day journey from the outsider's position of curiosity about the prison and it's therapy to that of immersed insider.

The civilians are very different from one another but have in common being, in one way or another, "fatherless sons". Charles is an endearing bartender who states that he's on the programme because all his life he has feared that prison will be his story. Chris is a young man working in the arts. He sports a folk singer's beard and a curtain of long hair which he seems to wear as a handy barrier to the world. He's cynical about the process and suggests that he is immune to the power of therapy to touch him as it clearly touches others. Brian is a pumped up teaching assistant  who seems to spend as much time in the gym as the prisoners. He attracts the rancour of the group by stating quite openly that he is judging them as they dig deep to reach their most profound, most challenging emotions. The civilians represent some of the tribes that exist outside the prison, the inmates all belong to actual rivalrous and violent tribes and gangs within it.

The threat of violence is all around. An Aryan gang member is teamed with the gentle, African American Charles. We fear insults, if not fists, will fly. But instead, the commitment to the process - aided greatly by those inmates who have been through the programme on a number of occasions - means we witness the group's determination to help their 'brothers'.  Men who have committed heinous crimes and who have never felt able to show any weakness are helped to cry for the first time about the death of their loved ones, the cruelty of their fathers, separation from their sons. It is a deeply moving experience to watch the group hold those who breakdown and regress sobbing and wailing. It requires immense physical strength (they are, on the whole, great bulls of men) and no less determination in the psychological holding they achieve as a group.

The film's power lies partly in the filmmakers' ability to be unobtrusive, there's no narrative telling us what to think or feel. In one scene a young prisoner, Dante, admits to being suicidal. A fellow prisoner experienced in the group therapy programme cajoles and bargains with him to stay in the session and with life. He pulls the silently weeping man-child to him in a violent embrace. He's microphoned up so we hear their joint heartbeats - pounding, irregular, fierce.

The Work is a poignant reminder of the power of therapy even in the most unlikely of settings. It is deeply humane film which perfectly reflects the humanity that exists in all men even those whose depravity and brutality has landed them in a maximum security prison for double life sentences and beyond. A humane programme such as the one in Folsom can foster humanity - no prisoners who have taken part in the programme and who have been released early have, to date, reoffended. I think Johnny Cash, a passionate campaigner for prison reform, would have approved.