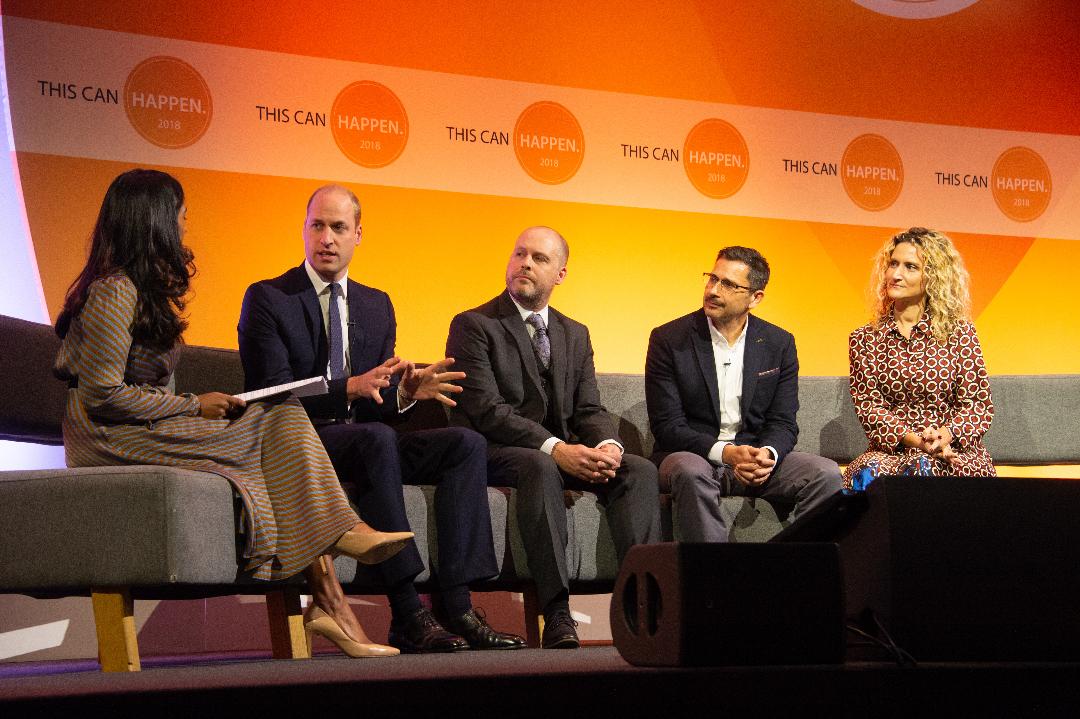 The star appearance at mental health and the workplace conference This Can Happen 2018 at the O2 Centre today was a 36-year old man whose experience as a helicopter pilot in the RAF and then the air ambulance service in East Anglia left him struggling to cope with the traumatic scenes he had witnessed. “You are trained to deal with this, and I never thought it would get too much”, but  following one particularly traumatic experience that involved children he felt he had gone “over the edge… I got very down. And you don’t want to take it home.”

The man who was talking so honestly about his mental health challenges was, of course, the Duke of Cambridge, co-founder of Heads Together and second in line to the throne. On a panel that included Edward Simpson, a former policeman talking from the heart about his struggles to keep going in the face of crushing depression, and Dr Ellie Cannon, a doctor who had suffered an unexpected breakdown when a member of her family ended up in the hospital in which she was working, he spoke simply and humbly about how anyone could be affected by mental health problems at work.

But the inaugural conference did not focus only on experiences of mental health and the workplace; it was even more valuable for the sharing of systems and stragies among the 600-odd businesses who were represented.

Barbara Harvey, research managing director for international management consultancy Accenture, unveiled a survey which showed that one in four is an unrealistically optimistic ratio of those who have experienced mental health problems: nine in ten is more like it. She has designed a very thorough programme for workers, which includes up to 12 therapy sessions and membership of Big White Wall. “It is very important that the conversation comes from the top, that management really buys in to this.” The business adopts a continuous learning programme, and the Stephenson-Farmer review is a touchstone for their actions.

Another big name company, GSK the sixth biggest pharmaceutical company in the world, also takes mental health seriously. Head of employee health strategy Monika Misra explained the importance of understanding the breadth of workers, and using the data to come up with individual answers to their issues, from flexible working to mentoring to extra support.

A smaller session addressed companies with smaller workforces and budgets, offering to tell people how to start off the journey in this new area in which “health and safety” has morphed into “wellbeing and mental health”. Susan Bright, managing partner at law firm Hogan Lovells has worked on this issue for five years. Her law firm has an in-house counsellor in a private room and it allows anyone in the business to self-refer. “The counsellor was immediately very busy, which rather worried me, but that was because we made it easier for people. Now, the counsellor recently told me, she no longer sees so many chronic problems, so we are catching things before they get bad; it’s preventative.”

One speaker, Matt Taylor, a senior manager at Jaguar Land Rover had a different approach. In a largely male, pragmatic manufacturing workforce, he introduced the issue of mental health to the company by making a short video in which he described his own breakdown and slow return to work. “We showed it at a big company event. There was a deathly silence, but then afterwards the reaction was extremely positive. And then people wanted to get involved themselves.”

Another session, on men and mental health, was facilitated by writer Poorna Bell, who reported that her own husband had taken his own life three years; she has written a book, Chase the Rainbow about trying to understand this. Her panel ranged from Che Donald, vice chair of the Police Federation of England and Wales, to tattooed and plait-bearded chef Andrew Clarke, and partner in mega-insurance company Aon, Jay Harvey. They were talking about the vulnerability of men to suicide, but also the macho culture that makes it difficult for so many men to talk about their problems. Clarke, the chef and founder of London restaurants St Leonards and Brunswick House is starting up a support network called Pilot Light for those struggling in the high-octane, late-night world of hospitality following his own revelation of long-covered up depression.

What helps? he was asked. Knowing that you have the support of others, and that you don’t have to be macho to be a man.

Sitting in the audience at this talk, and nodding sagely, was the Duke of Cambridge.

The conference, the biggest of its kind, was conceived and planned by Jonny Benjamin and Neil Laybourn. You will probably remember, Jonny was discovered by Neil as he was about to take his own life on Waterloo Bridge. It is an irony, alluded to at the beginning of the conference, that sadly Jonny could not be there as he was back in hospital. He continues to struggle with his mental health, but his work for this conference should help to create a culture in which work is not such a problematic place for mental wellbeing.