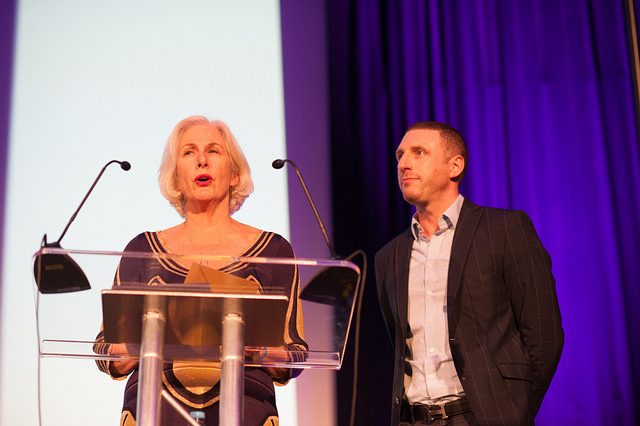 The Mind Media Awards are an annual event designed to encourage better coverage of mental health issues in the British media. It's clear to everyone that mental health is a problem which is no longer swept under the carpet, but there is still some way to go, and Mind is a spearhead in pushing at the boundaries of reporting.

I was proud and humbled to be invited onto the esteemed judging panel this year, alongside such experts as Claudia Hammond (presenter of Radio 4's, All in the Mind), journalist and psychiatrist Dr Max Pemberton and TV correspondents Sean Fletcher and Victoria Macdonald. Categories ranged through radio, TV, podcasts and blogs to films and magazine campaigns and we all watched or read many excellent examples of fine journalism, and brave exposition by people affected by mental illnesses such as schizophrenia, bipolar, depression, anxiety and psychosis.

Cold Feet, Hollyoaks, Victoria Derbyshire, Bryony Gordon and I, Daniel Blake were among the winners, as well as Construction News, whose award I presented for their important coverage of suicide rates in male construction workers.

Prince Harry presented the Speaking Out Award, to the ten runners who featured in the BBC One documentary Mind over Marathon. Prince Harry, together with the Duke and Duchess of Cambridge, has this year spearheaded the Heads Together campaign, of which Mind is a charity partner. Speaking at the event, Prince Harry said: “I wanted to come here tonight to say thank you. At the beginning of the year William, Catherine and I believed the country was on the cusp of something special. We noticed after decades of hard work from dedicated campaigners, people seemed ready for a different kind of conversation on mental health.

"Everyone was tired of stigma and scare stories about mental illness, and frustrated it was always being written up in a negative way. They saw that their children were emotionally open in new ways that seemed positive and empowering. Finally, we were all beginning to grasp that mental fitness was an issue worth talking about for every one of us. They were ready for a truly national conversation on mental health. With the help of people in this room, this is exactly what we’ve had. In classrooms, in workplaces, around the dinner table, between friends even between strangers. People are now really talking about their own wellbeing and looking to help those around them. And while just talking doesn’t cure all ills, we are now shattering the silence that was a real barrier to progress."

Mind’s Chief Executive Paul Farmer, said: “We received a record number of entries for this year’s Mind Media Awards, in what has been a phenomenal year for the profile of mental health in the media. At Mind, we’ve seen the impact of this, with more people calling our infoline for help and support and more people accessing the services offered by our local Minds. But this is not the end of our journey. Sadly, we know that stigma and discrimination still exists, which is why we want to thank everyone nominated for an award for challenging perceptions and making the voices of the one in four of us that experiences a mental health problem each year heard.”

The awards evening was a smash - the Odeon Leicester Square filled with close to 1000 people celebrating the difference that all too often leads to pain and discrimination. The stars were certainly there - Prince Harry, Fearne Cotton and Stephen Fry among many more - but the real admiration was for the people who have to struggle so hard against what life has dealt them.

Speaking Out The ten runners from BBC’s Mind Over Marathon