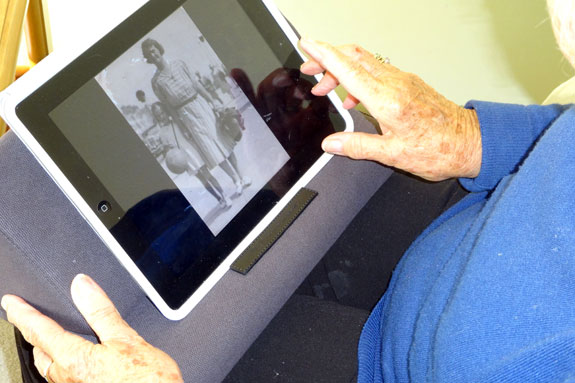 Sharing music and photographs is an effective way to spark memories and discussion – it's part of the appeal of social media, after all. But there is increasing awareness that when caring for people with dementia it helps to know something about their history, too, most of which will have taken place in a pre-facebook era. It's been shown that even something as simple as an older person having a photograph of their younger self on a hospital table (the Face to a Name campaign) can improve the quality of care they receive.


Volunteering as a trustee with Independent Arts, a charity on the Isle of Wight that uses the arts to support vulnerable people, I've been privileged to observe conversations in care homes between our practitioners and people with dementia. During one reminiscence session, the practitioner brought along a basket full of brushes – hairbrushes, hearth brushes, make-up brushes; some ancient, some modern – and passed them around.

The group that had seemed so passive, became animated and talkative, revealing fascinating glimpses of their younger lives.

Such a simple idea, but the responses were illuminating and the group that had seemed so passive and quiet when we arrived – almost all had dementia – became animated and talkative as they handled the brushes, revealing fascinating glimpses of their younger lives. One picked up a paintbrush and by his actions showed that he had worked as a decorator; one lady held a shoe brush and had a flashback of how as a child a maid used to polish her shoes.

The oldest in the group were in their nineties, but the youngest were in their sixties, and to know they were already so dependent on care was an eye-opener. It brought home to me that we can't take our health – or our memories – for granted. It made me think about how we should record our memories while we can. Why wait for amnesia to start to encroach before documenting a life story?

My dad is in his late eighties and fortunately he still has excellent recall and a wealth of wonderful stories about his childhood. The editor of his local parish magazine was spellbound by his Just William-style tales and offered to jot them down and serialise them each month. It's something I'd meant to do myself but didn't have the time.

So now, it's on record that as a boy he saw the Blitz light up the skies over Sheffield; cycled with friends across the Pennines to Wales, living on cheese sandwiches; led a gang of local children on foot to an airshow miles away without their parents knowing where they'd gone; and was caned – along with half the school – by his headmaster for taking part in a mass snowball fight at the war memorial. I'm so glad Kay is taking time to document these stories for posterity.

Looking back at it now I can see what a slice of history it is.

Twenty-two years ago I visited my Great Aunt in Wolverhampton when she was aged 102, her mind still sharp as a pin. We looked at ancient family photographs and she agreed to talk on video-camera about her Victorian childhood and also told me how her own grandparents (my great great grandparents) set sail from Somerset to Brazil in the 1860s on a desperate journey in search of land and work. The house they'd been promised was actually a bamboo shed, monkeys stole their chickens, and conditions were so harsh that six years later they risked everything once more and returned to England, where my grandmother and great aunt were born.

Looking back at it now I can see what a slice of history it is. I'm glad I thought to record my great aunt's memories while I had the chance. She died the following year.

Each of us has memories that are unique and precious to us. Treasure them before they fade.