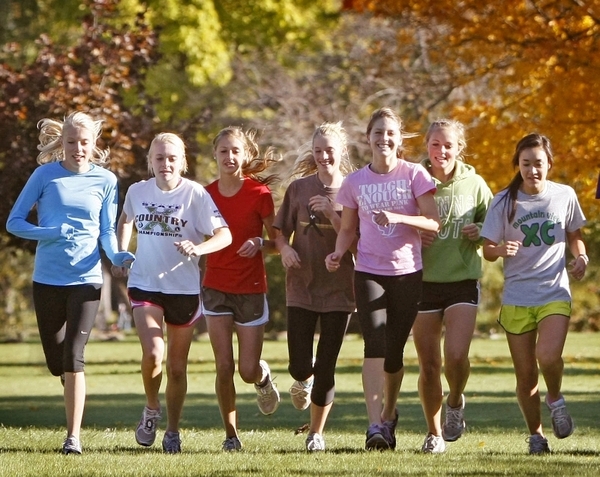 How Sports Protect Girls' Self Esteem

From birth, a child begins to explore her body – what it can do, how it can be controlled, what gives it pain and pleasure. Her body is not a thing but a process and tool. But later in childhood something happens that transforms her body into an object that is constantly viewed and judged and pitted against an ideal physique.

No one who loves her wants this to happen. Her parents tell her that she is more than her looks. Her teachers coach her in self-acceptance. But by the age of 10, there is a fifty-fifty chance that she will be dissatisfied with her weight, shape and general appearance.

Cultural values leach into the minds of our children. From animated films associating slenderness and prettiness with goodness to TV comedies where thin female characters are praised more often than heavier ones, girls learn that a certain physique is desirable and that people with other physiques are derided. As these social lessons are absorbed, girls become less confident, more dissatisfied with their appearance, and more irritable.

A large body of research tracks the increasing self-dissatisfaction and decreasing confidence of girls as they pass from later childhood to early adolescence. Well-meaning efforts to counter the cultural distortions of body image seldom provide our daughters with adequate protection. There is however one thing that has a measurable and positive impact, and that is sport.

Teenage girls who engage in sports are likely to do better in school, to have higher levels of confidence and lower levels of depression than comparable teens who do not regularly engage in a sport. Along with improved psychological well-being are other health benefits: exercise reduces the risk of breast cancer, obesity and osteoporosis in later life. Another benefit seems to be greater control over her sexual activity: teens who engage in sport have fewer unwanted pregnancies. Sport seems to offer the best armour against those elements in our culture that depress the confidence of our teenage daughters.

While, noting correlations between two different things – engaging in sport and girls' well-being – is exciting and helpful, actually understanding why these are connected involves a different process. Drawing on my own research and that of others, I can offer some explanations as to why these correlations hold.

Sport shifts perspective on the body

While girls who engage in many sports are often under close and critical observation by their peers, their coach, their teammates, this scrutiny does not gauge beauty or sex appeal; it gauges action, technique and performance.

In sport, criticism is specific and dynamic

In sport, when someone criticises you, the “faults" are identified clearly, along with a remedy. Instead of, “My hips are too wide, my legs are too short," a girl hears, “You are bending your legs when you kick; keep them straight."

In working at a sport, the child, teen or adult returns to the model of the body engaged in learning what it can do. She learns that its limits today can be extended tomorrow. She learns to care for it, and get feedback: when will further work harm my body, and when will further effort improve its abilities?

A by-product of sport is learning that ability is malleable: what she can do, and what she can be changes according to her efforts. In all contexts, a growth mindset is associated with increased confidence. In contrast, thinking that abilities are innate may reduce her willingness to give something a go. After all, if ability is something we either have or lack, then failure delivers a permanent sting as proof that we simply have not got what it takes.

Through sport, girls engage with others in positive ways

Another byproduct of sport is working with others in new ways, trusting others and being trustworthy. Her improvement reflects on the people who teach her, so teaching becomes mutual. Her skills affect her teammates who look to her for what she can do on the day, not whether she meets some ideal. She also learns to accept that competition can be open and healthy – something not always on the social learning curriculum.

Sport can make you happy

Exercise itself releases naturally occurring chemicals that fill her with a sense of wellbeing. Doing well and winning may produce a special high, but whatever the outcome, the sheer excitement of a game and the physical effort are rewarding.

But a word of caution: some girls drop out of a beloved sport during the transition from lithe child to shapely teen. A gymnast who at the age of 10 exulted in her physical prowess may, at the age of 13, find it excruciating to expose her new and as yet awkward body to others' gaze. At such turning points in a girl's life, those who care for her would do well to intervene. The particular sport does not seem to matter (though team sports provide particular benefits to wellbeing) but the loss of all sporting activity could be a huge loss, indeed.

Click here to buy The Confident Child: Raising Children to Believe in Themselves

Click here to buy You Don't Really Know Me: Why Mothers and Daughters Fight and How Both Can Win