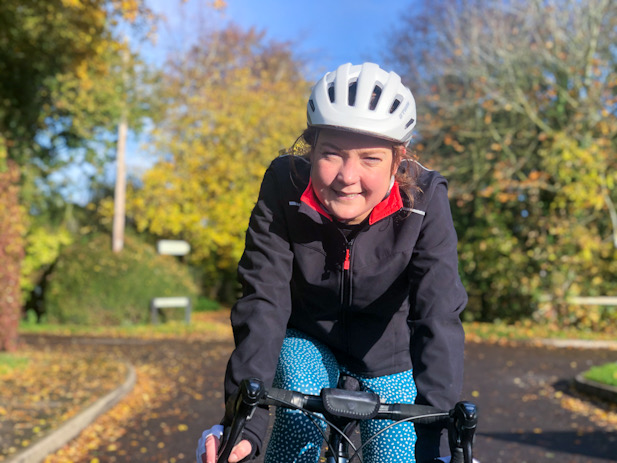 My 100km Bike Ride to Celebrate My Life-Saving Lung Transplant

In 2017 I had a double lung transplant. For the previous year I had been fighting hard to stay alive long enough for this call to come and the operation that offered me a second chance. Dealing with this physically was struggle enough, but it’s taken me much longer to acknowledge and digest the psychological side.

I was born with Cystic Fibrosis and was lucky enough to spend most of my childhood and young adulthood fairly well and living what would be considered a pretty normal life, only interspersed with hospital appointments and daily medication.

Sadly, as I turned 27 and living in London, my condition quite quickly deteriorated to the point that after discussions with my medical team in 2016 I was placed on the transplant list to wait for the operation which would hopefully save my life.

A few months later, having previously still been working full-time, I was admitted to hospital for over two months; by this point I could no longer walk across the room without oxygen, my lung function was meagre, and my body was giving up. I was at this point too sick even to be considered for transplant.

Thankfully in April, a month before my twenty-eighth birthday, the hospital had stabilised me enough that surgery was possible and my call came. Due to the incredible generosity of my donor and their family, as well as some amazing medical teams, I am here today. Many aren’t this lucky, people can wait for years on the list and some die waiting due to the lack of donors in the UK.

Until this point the fight I had been going through seemed largely physical. Everything was so out of my control, and I was so unwell, that digesting the situation emotionally was too much. I discussed my funeral, shared the possibility of end of life care with my boyfriend and friends and simply took each day, and the continuous medical treatments they entailed, as they came. I obviously had moments of sadness but often these were about the little things and not in context of the bigger picture.

Even immediately before surgery I was remarkably emotionally stable; although I cried I don’t think the realisation of the magnitude of what I was about to go into, and what I had already been through, really set in.

Just fourteen days post-surgery, thanks for the amazing decision made by my donor and their family, I was discharged home from hospital, probably still in somewhat of a daze. I had a whole new medical regime to learn and didn’t have the time to stop and think about what I had been through, emotionally I was in a bit of a state… but that was to be expected in many ways, and with the amount of different new medicines in my system, and probably very difficult to pick apart.

It was only when I had been home from surgery a few weeks that the emotional side of everything started to catch up a little. While my physical care was being constantly monitored it came as somewhat of a surprise, maybe naively, that the psychological needs I had were less closely monitored.

I struggled with huge anxiety; with worries that my health would decline again as I struggled to interpret changes in my body after spending years knowing symptoms and the appropriate actions, with fears of catching infections due to immune suppression, with worries about what my future entailed and how I might move back to ‘normality’. I experienced panic attacks and struggled to sleep, was emotional a lot but often felt unable to show it and didn’t feel the coping mechanisms I had previously built always cut it.

Having set up an online account after my transplant, to try and share my experience but also learn from others, I was astounded and envious of the amount of care some countries were able to offer on top of the purely medical. I am, obviously, so hugely grateful for the NHS and what it offers me and our country, but the reality is that it is overstretched. Trusts have to pick and choose and sadly for me it was with the psychological care that I felt this most.

Since my transplant I have still only had three face-to-face psychology appointments, and a handful more on the phone. I have been passed round my local councils’ system, after a ten-month wait, and am still waiting, over a year after referral, to see someone appropriately qualified to try and talk through what I went through and the impact that it has had in my life since then.

Given this I was left to search for ways of dealing with these issues myself. I struggled between wanting to talk about my feelings and not wanting to burden those around me who had already been through so much. At this point further medical issues, a collapsed lung and a transplant related cancer diagnosis, further set me back on my journey in attempting to pick apart what I had been through, digest and start to move forward.

It was from this point physical activity started playing more of a role. I’m not saying I was suddenly able to do a lot and at first it was often more of a reminder of my situation than a way of escaping it. I started doing weights with baked bean cans as I had lost so much muscle, but over time was slowly able to build on this.

As my strength and physical ability grew it was something I was able to take control of, that I knew would benefit my recovery but that was also a distraction from a life, which in many ways revolved around my surgery, something that will always be a reality to an extent.

Since then I have built on this, using exercise as my unofficial therapy and last year I decided I wanted to set myself a challenge which would not only give me something to work towards but also allow me to give something back. I am, because of this, now training to ride over 100km in celebration of my third lungaversary in April 2020, a huge feat considering the position I was in less than 36 months ago.

A ride between Cambridge and London, between the Royal Papworth Hospital and The Royal Brompton, from the hospital that performed the operation that saved my life and the hospital that kept me alive long enough to have it, with the aim of raising not just funds for both but also awareness around organ donation and the importance of sharing your wishes.

While it will obviously be physically challenging and require a huge amount of training. It will also need mental determination, both in training and during the ride itself. I am proud to say that although my journey is definitely not finished in terms of dealing with the mental side of my transplant, and probably never will be, my experiences have taught me great mental strength and resilience which will help with this challenge but also my future.

Nothing feels better than doing something I know previously would have been impossible, and still being able to breathe while doing it. Whether it’s a hill on the bike, or simply taking the stairs rather than the lift.

For me, one of the biggest leaps was in accepting I could take control of the situation. I won’t pretend that sometimes I still have days that are hard and I want to stay in bed but while I still hope that one day I may be able to more formally work through the journey I have been on but until then doing things like exercise, quitting a job that didn’t appreciate me or care and instead working for myself and making plans for the future, allow me to make the most of my second chance every single day.

You can follow Pippa’s journey on Instagram @nowwhatcanieat or find out more about her charity ride at www.justgiving.com/crowdfunding/lungaversaryride

Processing feelings of loss after a diagnosis

The link between chronic illness and depression

How to stop illness killing your appetite