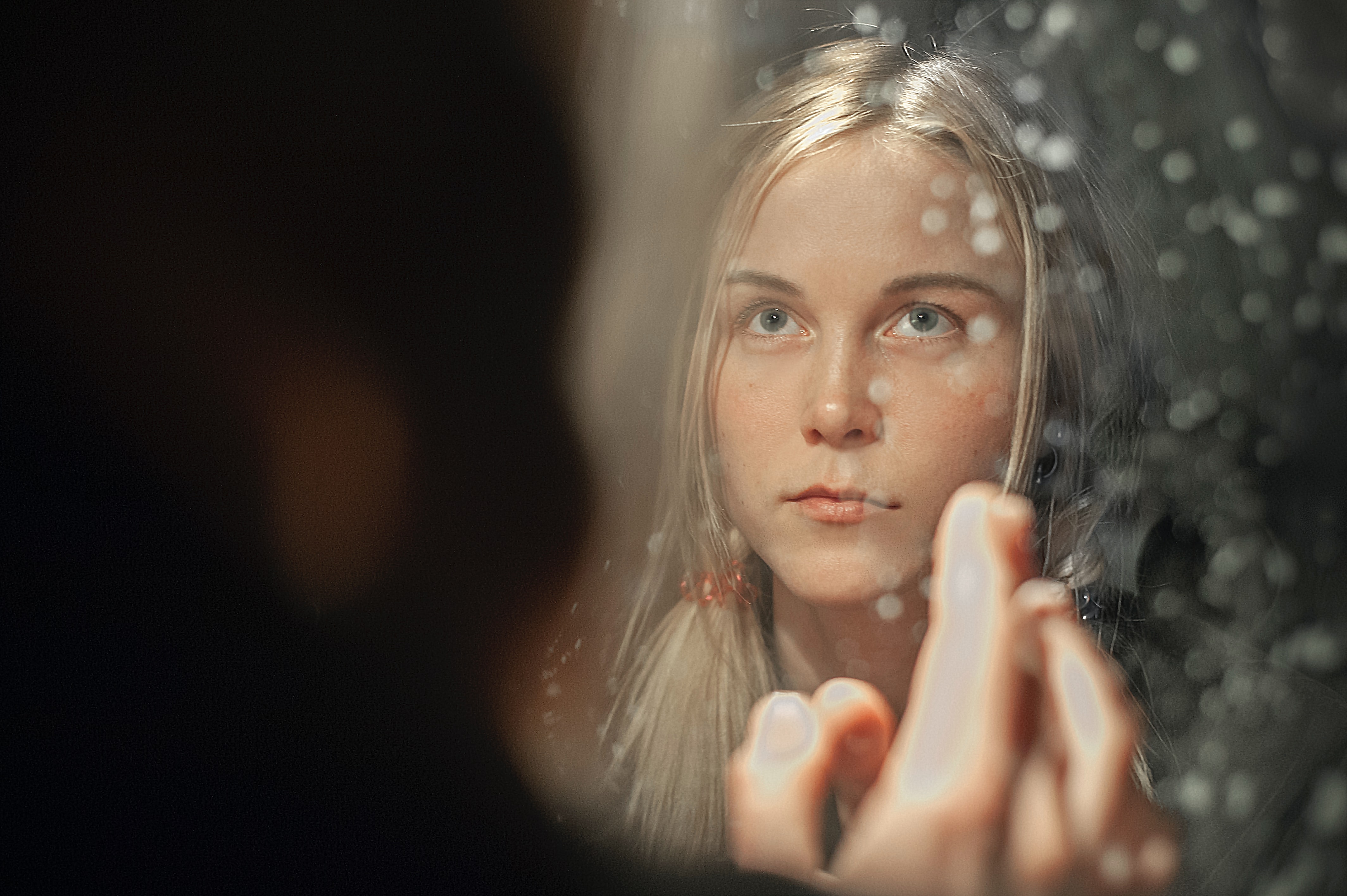 Body dysmorphic disorder (BDD) is a mental health condition characterised by an excessive preoccupation with perceived flaws in your physical appearance. While the flaws may appear minimal or completely unobservable to other people, they are a source of great distress to the BDD sufferer. Their difficult relationship with their appearance is often mediated through mirrors and other reflective surfaces – those living with BDD commonly use them multiple, and sometimes hundreds of times a day as a way of checking their features or perceived defects, in part as a method of control.

As someone who lives with BDD, it has been helpful to learn about the subjective relationship sufferers can have with their mirror image. As my former therapist would happily – or perhaps not! – confirm, I have always resolutely clung to the belief that what I see in the mirror is an objective reality. It’s there, reflected in the glass, so how could it not be?

Given the distress this belief can cause, it is interesting to reflect on why it is so firmly embedded. Research carried out at UCL into the relationship between BDD and looking in the mirror found that BDD patients tend to believe ‘what you see is what you get’.

In fact, a more useful approach could be one of ‘what you see is what you construct.’ Those with BDD tend to home in on particular aspects of their physical appearance, rather than engaging with it more holistically. This can skew their view of how they look, as can the meaning and value they attach to their physical appearance. These tendencies can mean that what they see is anything but an objective reality. Rather, it is a reflection that is distorted by their own subjectivity.

This understanding has made me more aware of how I interact with my mirror image, and more aware of how my sense of it can shift. I recently went to Milan on holiday during a period of really hot weather. While I love Italy, a country I have previously lived in, I also find it difficult for its socio-cultural focus on the visual and on appearances. In broad terms, Italians like to look and like to be seen. They are invested in their physical appearance and their wardrobe, and to my mind at least are often very groomed and very attractive. During my holiday the heat, and my difficulties with it, made me incredibly self-conscious and incredibly self-critical, sentiments that were exacerbated and reinforced by the comparisons that I made between how I assumed I looked in the heat, and the Italians whose sense of style and general ‘togetherness’ did not seem to be adversely affected by the humidity and soaring temperatures.

When temperatures rise, I become anxious about how hot and sweaty I look, which in turn exacerbates the situation since an increasingly regular side effect of my anxiety is sudden hot flushes. My need to check my appearance in the mirror then becomes a compulsive one. Although what I see may prove distressing, it feels easier to know how I look, rather than not, and to be assuming the worst. It is interesting – after the fact – to consider how I interact with my reflection. Often, at first, I am able to reassure myself that I don’t look as bad as I assume I do. In ‘normal’ situations, I am sometimes able to forget my physical appearance for a period of time and interact with the outside world from the perspective of the person I feel I am on the inside – more interesting, more attractive. However, in moments of stress, that inner self-image becomes increasingly negative, and can almost become more painful to engage with than the image I see when I am able to look in a mirror.

And in terms of what I do see, as my anxiety increases, it is as if the image in the mirror distorts, almost before my eyes. It becomes as bad as and worse than the image I had imagined. While on an intellectual level I can understand what I am doing to myself and to how I see myself in these situations, my emotional response overwhelms any rational mitigations and consequently overwhelms me.

Research into how people with BDD process visual images has helped me understand what is happening in these moments of stress, albeit this understanding doesn’t diminish how painful they are. It has also made me more attuned to the impact of my own subjectivity. I had a very clear example of this when I returned from Italy. Back in the UK, cooler, less concerned about comparisons or about being seen, my relationship with my appearance suddenly shifted to a much more positive one, and I saw myself in a way that I had been unable to for my entire time away. I noticed, and was surprised by how quickly this change occurred, and on this occasion how long lasting it was. Interestingly, it was only when I went into work that my positivity collapsed, my reflection seemed once again to distort and become something almost intolerable, and the allied negative self-talk crept back in.

That negative self-talk hints at another reason why we may see ourselves in a subjective and often negative way, beyond the visual processes associated with BDD. Body displacement theory relates to a negative relationship with one’s body, whose origins may lie elsewhere.

According to Freud, displacement is when a person shifts their impulses from an unacceptable target to a more acceptable or less threatening one. You may be angry with your boss for what you feel is a failure to take you seriously. It may be difficult to express that anger directly. Instead, you may ‘displace’ your anger by picking a fight with your partner, finding an alternate outlet for difficult feelings.

Body displacement theory relates this process specifically with how we can displace negative feelings about ourselves onto our bodies. Perhaps unsurprisingly, research has shown that it is extremely common among those with eating disorders. This has helped doctors develop programmes that help patients address their negative thoughts and feelings about themselves directly, rather than displacing their distress onto their body and potentially perpetuating their eating disorder.

The difficulty for many people living with BDD is that however difficult they find their reflection, and however much it reinforces their sense of negative self-esteem, they are inexorably drawn to it.

A UCL research project in 2000 asked why those with BDD spend so long looking in the mirror, by contrasting their experiences and motivations with a control group who were not living with the condition. All participants in the project were asked to look at themselves in the mirror for shorter and longer periods of time.

The findings showed that those with BDD experienced an increase in distress after looking in the mirror. Despite this, their survey responses revealed an unquenchable hope that they will look different to their internal body image or feel comfortable with their appearance. This hope may at times be reinforced when they look in a mirror and feel better about their appearance or not as bad as they anticipated. However, mirror-gazing soon and very easily becomes counter-productive, and serves to reinforce the individual’s negative aesthetic judgement of how they look.

Again, despite the distress it can cause, those with BDD indicated that they believe they will feel worse if they resist looking in mirrors. The potential short-term gain of temporary reassurance seems to have more of a hold than the longer-term distress caused by their interaction with their image.

Interaction is a key term when considering the relationship those with BDD have with their reflection. Firstly, the research confirmed that the longer they look in the mirror, the more likely they are to shift their focus from the external reflection in the mirror to their mental representation of their body image, though they may be more or less aware of this. The fact that this internal body image is unstable then drives sufferers’ need to check their reflection, creating an unhelpful and often destructive vicious circle. Secondly, the way a person with BDD responds to their reflection can also be considered a particular kind of interaction in neurological terms.

UCLA researchers examined the brain activity of people with and without BDD when looking at two images – one of themselves and one of a familiar actor. There were three versions of each image. The first was unaltered. The second included only high-spatial frequency information, which enabled detailed analysis of facial traits. The last included only low-spatial frequency information, revealing only the shape of the face and the relationship between its different features.

This research echoes findings in the UCL research – that people with BDD find it hard to see their face holistically, instead focusing on perceived imperfections and convincing themselves that everyone else will see these in exactly the same way that they do. It also reflects the shift from a mirror image to an inner and subjective self-image that sufferers experience, as their emotional response is heightened and often comes to dominate.

The research into the use of mirrors also considered how participants with BDD evaluated themselves and other people. While their perceived appearance defects had a significant impact on their self-evaluation, they generally judged other people on the basis of a range of factors, not just appearance. Not surprisingly, they were much harder on themselves than on other people.

These harsh judgements can often lead to anxiety, depression, a self of shame and low self-esteem in those with BDD. Yet despite their often, fixed beliefs about themselves, sufferers can also, simultaneously, demonstrate an awareness that they judge themselves more harshly and negatively than they think other people.

While in a moment of crisis it is an emotional response that prevails over a rational understanding, an increased awareness of this and other key tendencies in those living with BDD, along with a greater understanding of how the brain works to process visual images in a particular way, can hopefully help those living with the condition accept that there may be another way of seeing themselves, and begin to shift some of their most rigidly-held beliefs.

Emma Kilburn is a writer and Deputy Head teacher

How CBT changed my relationship to my body

4 ways to encourage a healthy body image in your daughter