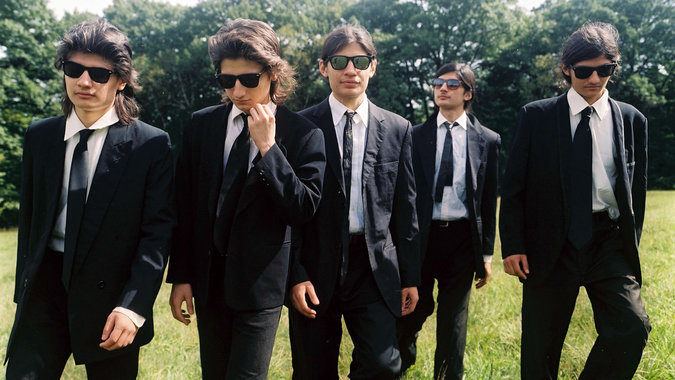 Wolfpack is an unsettling story which Crystal Moselle films with little intrusion or explanation, allowing the audience to bear witness to a series of interviews to camera with members of the pack, a family of six sons and one daughter, Visnu, who is rarely featured.

The filmmaker ran into the striking boys, as they first ventured together un-chaperoned out of captivity in the hands of their mentally unstable father. Uncanny in their pack of six, and striking with their black waist length hair, dressed in black suits and Ray-Bans, straight out of a scene from Reservoir Dogs. Mukunda, Narayana, Govinda, Bhagavan, Krisna, and Jagadesh, named after Hindu deities, range from 11 to 18 years old. Their father held the sole key to their Lower East Side apartment in Manhattan, and kept his family cloistered from the evils and perils he perceived in the outside world.

The children were deprived of friends, outings, freedom and a normal life, and persecuted by their father’s fears of ‘outside’. In one year they never left the house at all, even for fresh air, and on any trip they were guarded by their father.

Round the clock exposure to thriller and horror movies, television shows and rock music, which their father loved, offered them an escape from the dysfunctional chaos of their home life. Their only concept of real life outside the family strictures were the movies they devoured, fostering an immense resourcefulness and creativity, as they made hundreds of home movies reenacting their favourite scenes.

There is compelling footage from their years of making homages to favourite films, wearing an assortment of costumes, masks and props made out of cereal boxes and yoga mats. Indeed their props were once mistaken for the real thing when a SWAT team broke into their apartment looking for weapons. Ironically their father’s paranoia over violence found them handcuffed over styrofoam replicas. “It was like Inside Man”, they laugh, as they make sense of their reality through reference to movies.

What is hard to believe is the lack of social intervention, considering the violence alluded to and their mother’s collusion with a man who believed he was God. He lost his power over the children when his 15-year old escaped, after which he refused to take orders. The brothers recount stories of Oscar locking them in, and hitting and controlling their mother.  She is tearful about her role as passive victim, powerless to stand up to his ‘ticking bomb’.

What the film conveys is the power of the individual to survive extremes of abuse, and also the extent of the children’s enmeshment as they passionately defend their mother, insisting she keep her job home schooling them, rather than face the dangers ‘out there’ which they still believe await them. Required now to attend therapy, they are careful not to share too much, which may be a ploy to protect their parents.

Oscar appears a defeated man in a depressed alcoholic stupor, “my power is influencing everybody, think about that!” he threatens emptily. While Oscar set out to protect his family from drugs, religion and government control, he exercised his own. The boys talk of their feelings towards him, “There are things you just don’t get over, you just don’t forgive, you just don’t put behind you”.

Yet we glimpse the possibility of escape for one of the boys working on a film set, on a job he is well equipped to do.  And with the documentary winning at Sundance, the boys have formed their own company, Wolfpack Productions, acknowledged by the film industry for their creativity, and a happy and empowering outcome of sharing their story.

Jacqueline Palmer is a therapist on the welldoing directory.