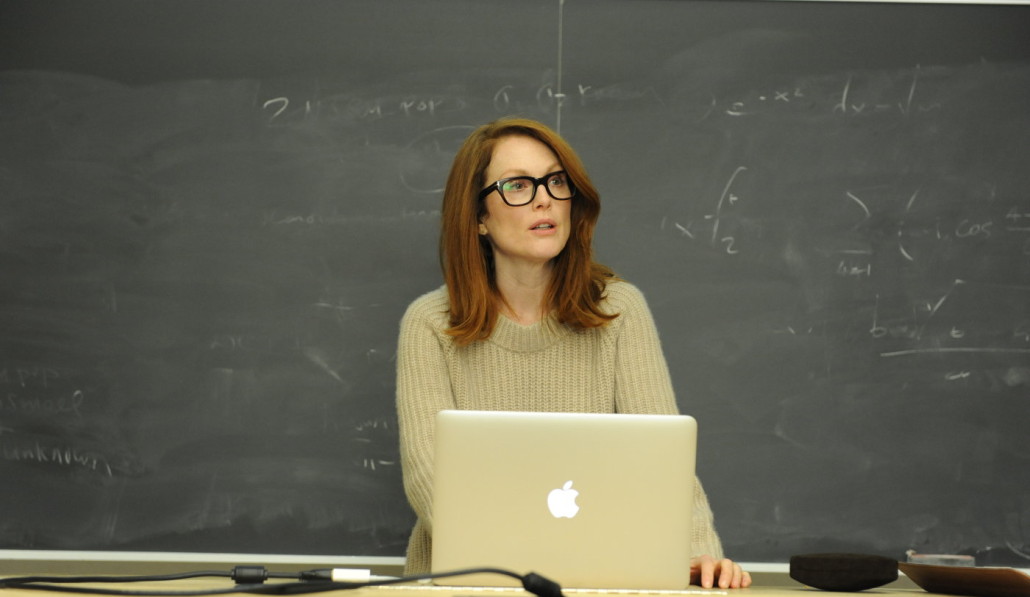 What do you do when you’re fifty years old, a Professor of Linguistics at Columbia, a writer, a mother, and all of a sudden you start to lose language and memory.

'Still Alice' is based on a book by Lisa Genova, and directed by Richard Glatzer and Wash Westmoreland, Julianne Moore gives an award winning turn as Dr Alice Howland, whose identity has been built on her intellect, and who teaches the early language skills of an eighteen month old, just as she is losing her own. Visiting her youngest daughter Lydia (Kristin Stewart) in LA, she dismisses her acting career, and free spirited way of being, in favour of the ‘real careers’ of her academic children. Soon however she is losing sleep, losing track of where she is, of names, objects and people, as she describes something “drops out from under me”.

Soon she is losing sleep, losing track of where she is, of names, objects and people, as she describes something “drops out from under me”.

Familial alzheimers is the diagnosis, and soon her children have to be told, as there is a high chance they’ll inherit it.  The film explores their complicated sibling rivalry, as ‘special’ daughter Anna (Kate Bosworth) tests positive, and begins a distancing process from her mother, as she shrinks from her own potential journey. “I wish I had cancer, I wouldn’t feel so ashamed”, says Alice, as the film explores the negative attitudes of people to this disease.  On a painful visit to a residential home, Alice observes the lives of the mainly female alzheimers sufferers. After a career spent fascinated by communication, Alice observes her own deterioration.  Cast adrift from all that made up her identity, she makes herself reminder notes about her life, her address, her birth date, and records a video to herself, to help escape the hell when the time comes.  With the love of her husband John (Alec Baldwin) there are moments of kindness where her old self is present, and others where she loses the map of her own bathroom, but John is soon forging ahead with his career. Invited to speak at an alzheimers conference, she is now a stranger to the lectern, following her words with a highlighter, and sharing “the art of losing everyday”, naming the perception of alzheimers sufferers as “comic, ridiculous or incapable”, and words "hanging" where she cannot reach them. She is cut out from her former driven life, to surrendering to the present moment.  There are powerful moments as Alice stumbles on the video she made as her escape route, and a newly formed closeness with her daughter Lydia, whose journal she reads, but will never remember. Lydia steps up to the plate as others fail, reading her mother a moving scene from Angels in America, in an important film that tells us a lot about an illness we turn away from, because it scares us. [embed]https://www.youtube.com/watch?v=ZrXrZ5iiR0o[/embed]