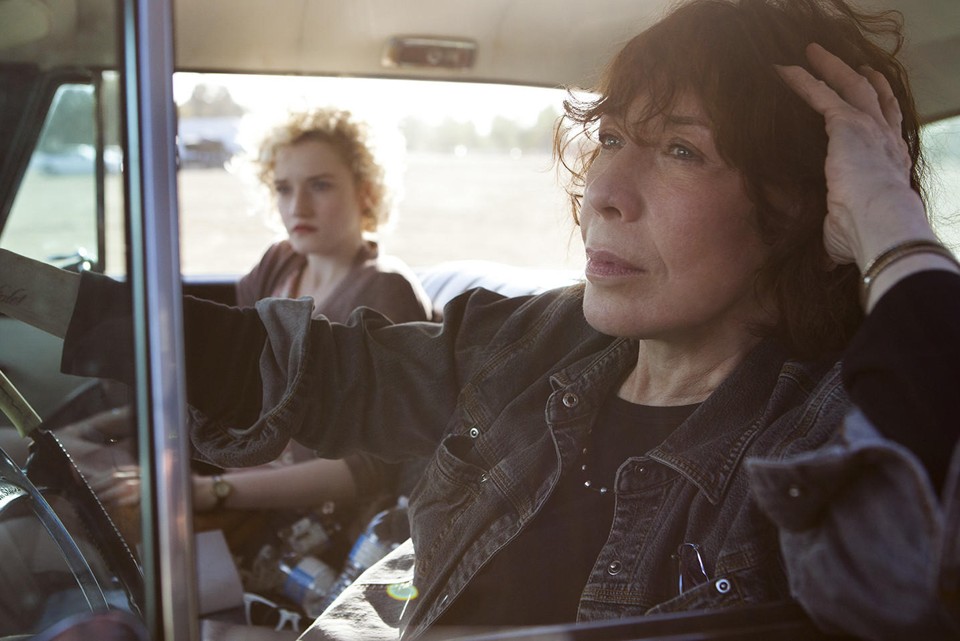 Paul Weitz's latest film is a breath of fresh air starring Lily Tomlin as Elle, a grouchy outspoken feminist and poet suffering from the recent loss of her long-term partner Vi. Told in chapters such as 'Ogre', and 'Endings', Elle breaks up with her much younger girlfriend: "You're a footnote", she tells her, with a comic lack of charm or empathy.

When granddaughter Sage turns up for help with an abortion booked that afternoon, Elle is short on funds, having cut up her credit cards because "they infantilise you". They set off in Elle's old Dodge with few friends to turn to, and a shared fear of Sage's mother Judy. The old abortion clinic is now a coffee shop where Elle is chucked out for talking about 'reasonably priced abortions', and later for seeking out the baby's father and clouting him. Sage meanwhile is a stranger to feminism:  "Do you think I'm a slut?", she asks her grandmother, a question Elle expected feminism to have put paid to.

The teenage father may call Elle a "crazy old bitch", but the comedy is never at her expense, and is sharp in its observations of the mother-daughter complex, as daughters escape mothers in a quest for self-identity.

Their road trip takes in Carl, an ex husband who wants something for his money, while Sage gets feminist life lessons. When Sage bemoans her sperm donor father, Elle snappily retorts: "At least the sperm didn't black your eye cause you talked back!"

Strong empowered women pass the baton to Sage and the audience, fed a Hollywood diet of heterosexuality, women as sex objects, or older women in laughable cameos, Grandma passes the Bechdel test hands down.

And if you don't know what that is, cross fingers for Grandma 2.