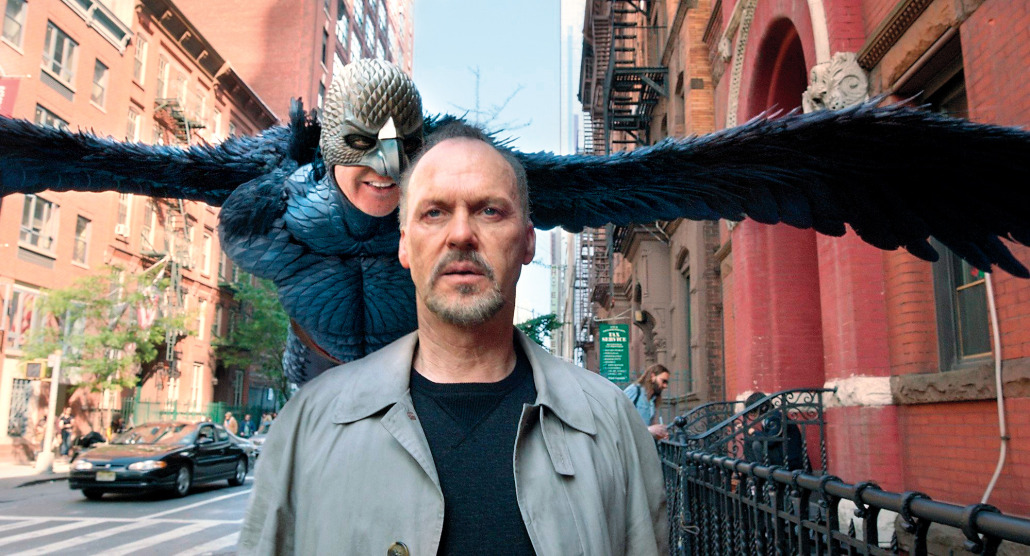 In a blackly comic satire targeting Broadway, Hollywood, and the anxieties of the acting profession, Alejandro Innarittu has imagined a manic creative take on narcissism in an actor's paranoia as he heads towards meltdown.

Film star Riggin Thompson (Michael Keaton), made famous in the blockbuster franchise Birdman, aims for prestige through a theatre adaptation of a Raymond Carver short story, 'What We Talk About When We Talk About Love'. The grimy dressing rooms contrast the magic of Hollywood.  “We don't belong in this shithole!", Riggin’s Birdman voice taunts him, yearning for the multi million blockbuster that gave him his power, complete with costumes, explosions, helicopters and skyscrapers, and, adding to the comic references, a world Keaton escaped when he left the Batman franchise. Theatre critic Tabatha (Lindsay Duncan) is after Riggin's blood,  "You're not an actor, you're a celebrity!", as Riggin anxiously watches the careers of George Clooney and Robert Downey Junior, while his alter ego’s voice bolsters his insecurity, "that clown doesn't have half your talent".

The film interrogates the split between theatre as art and craft, versus the Hollywood machine churning out celebrity. Shot in a seemingly continuous take, the camera swoops, stalks, winds and flies through the narrow corridors of the theatre's backstage, segueing through scene changes, night to day, intermission to front of house, in a theatrical flourish, as an incessant, theatrical drum roll score provided by Anthony Sanchez draws attention to the backstage machinery. So much rides on his production, that Riggin is literally falling apart, plagued by the voice of his alter-ego Birdman that bullies and taunts him. The film satirises theatre critics and journalists, and the actors they worship. "They want to spooge on him", says Lesley (Naomi Watts) of her offstage partner Mike, (Edward Norton). Mike is the ultimate method actor, who can only ‘perform’ onstage, a comic comment on Carver's gritty realism.  Meanwhile Mike is seducing Riggin's fresh-out-of-rehab daughter Sam (Emma Stone), who's working as her father’s assistant. Resentful of his shitty fathering, "Who are you! You don't even have a facebook page!", she punctures his ego, and belittles his celebrity status.  Inheriting his addiction to intensity, Sam plays truth or dare on the theatre's high ledge, bemoaning his false empowerment, "he convinced me I was special", a common narcissist's wound she can’t reconcile. "You confuse love with admiration", Riggin's ex tells him, as the group of actors stroke each other's fragile egos. "You're beautiful, you're talented and I'm lucky to have you!", Lesley parrots Riggin's phoney praise to co actor Laura (Andrea Riseborough), which instantly turns her on.  Even a homeless man tries a Shakespearean soliloquy, "Was that too much?" he asks, pressing Riggins as he bolts past to enter front of house.

The cast of characters are hungry for love, yet feel empty

The cast of characters are hungry for love, yet feel empty, "You're Birdman”, says the voice, “cause without me all that's left is you".  Riggin lights up for his fans, while relations with his daughter, his ex, and the possibly pregnant Laura are vacant and empty of connection. They struggle to find an identity offstage, feeding on their object's desire for them, but it's a desire trained on it’s subject, for youth, fame, celebrity, and Youtube hits. Birdman wants action, "not this talking depressing philosophical word-shit", as his coaching and inflation propels Riggin heavenward, to greatness, defying gravity, Birdman and Batman style.  Full of in house jokes and references to Hollywood’s movie making machine, Birdman takes the stage again in the first of the award season, as Keaton receives a Golden Globe, in an endless self referential loop, in an action packed journey to the Oscars and beyond.   [embed]https://www.youtube.com/watch?v=uJfLoE6hanc[/embed]