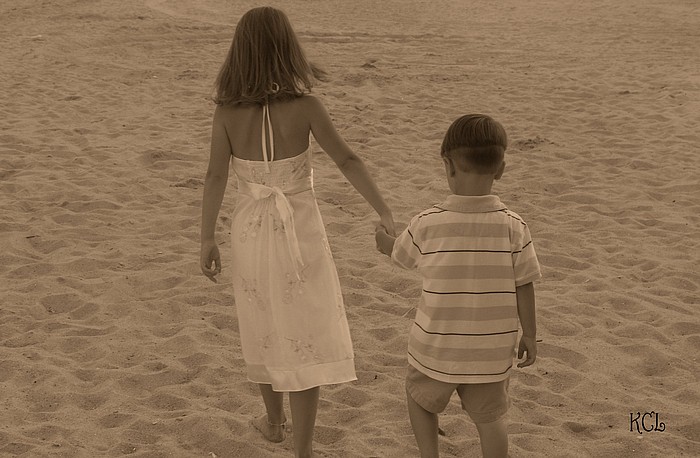 When Siblings Get Left Behind

Clients sometimes strike a deal with themselves, and therefore with me, about coming to therapy. A young woman once approached me with a fixed budget and time-frame she wanted to spend in treatment.

Aparna was an accomplished person living an enviable life. She was a human rights lawyer at a high profile international agency. She had met and married a Canadian counterpart overseas. They globe-­trotted for a while and decided to settle in the UK when their second child was born. Aparna's eyes glistened with pride and tenderness when she spoke of her family and the comfortable home she and her husband had created. But hearing her history — a shocking tale of her mother being regularly beaten and verbally abused by her alcoholic father — I feared for what might show up in the small window of time she was allowing. Her eyes widened like saucers and her body stiffened as she related what she had witnessed as a girl. Her mother lying at the bottom of the stairs, her sisters running to hide when the door slammed to signal her father's arrival home. Aparna was 'cut off', her demeanour suggested a degree of emotional dissociation from the trauma.

As a firstborn, Aparna managed to escape her father's explicit violence and hatred. Perhaps she was spared because she was earmarked to take care of her dad in old age. Whatever the reasons, much was expected of Aparna. She worked hard and studied at a redbrick university. Education widened her horizons and she made a series of choices that saw her living in Mozambique, Angola and Nicaragua. Though she diligently sent money and gifts home, the plight of her family receded to the periphery of her radar.

Having children of her own prompted a period of reflection. Aparna recognised the fear and powerlessness she felt about her family's situation had played a part in her exile to far-­flung places. Her sisters were now married and only the youngest child, her little brother Rakesh, was at home. Despite the scale and longevity of the suffering, I was impressed by Aparna's insight and resolve. She channeled pent-­up energy into setting up a new life for her mother after her divorce from her father, and had made great strides in facilitating her mother's transition out of a 35-­year marriage. Buoyed by her own strong and loving marriage, and the idea that now she could make a real difference, it seemed Aparna had already done a great deal to come to terms with the reality of her early life experience.

By our fourth session, I had come around to thinking that the six-­week deadline was going to be just fine. I offered validation for her insight and choices and Aparna responded well to the encouragement, but I was curious to know more about 16-­year-­old Rakesh.

Aparna made occasional remarks about her brother being lazy and under-­achieving at school. Rakesh was shy. According to Aparna, and to her great irritation, he spent a lot of time in his bedroom, obsessed with war games. I invited Aparna to become curious about Rakesh's experience. What was his life like? We pondered together how it must have been for Rakesh when his idol, Aparna, went off to university and didn't come back. How might he feel about being the youngest member of a household with such grim and shameful secrets? How did he feel about being the same gender as the perpetrator of his mother and sisters' abuse? Might he be more confused than Aparna about his father as a role model? Aparna's anger soon turned to anguish.

I introduced Aparna to the concepts of 'acting out' and 'acting in.' By escaping her family via education, Aparna had harnessed the drive and ambition needed to act out in a positive way. Maybe Rakesh felt more trapped in the traumatic environment. Their father had not spared him from ritual humiliation, mocking his appearance and reminding him that he was a financial burden. This zoning out, almost disappearing, is more typical of an 'acting in' coping response. Perhaps Rakesh did not see an escape route. At worst, Rakesh may have been closeting himself away for fear, at an unconscious level, that he could become a threatening figure to women himself. He could be channelling the aggression that he was fearful of into the relatively unthreatening route of violent gaming. Empathising with her little brother unleashed Aparna's own grief. Tears were shed and deep sadness about the cruelty and the losses could be acknowledged.

By our final session, Aparna had a plan to transform her relationship with Rakesh in motion. Rather than chivvy and chide him — setting maths problems and passages of French to translate — Aparna was trying a kindly mentoring role on for size. She had taken Rakesh go-­karting and, when she discovered his passion for basketball, signed them both up for season tickets.

Once again, I congratulated Aparna on her speedy progress. I encouraged her to look for opportunities to get Rakesh talking. She now needed no persuading of the benefits of opening up. As she got up to leave, Aparna was not the only one in thinking that the decision to spend her time and money on therapy was a master-­stroke.

Names and specific details have been changed for the sake of anonymity.