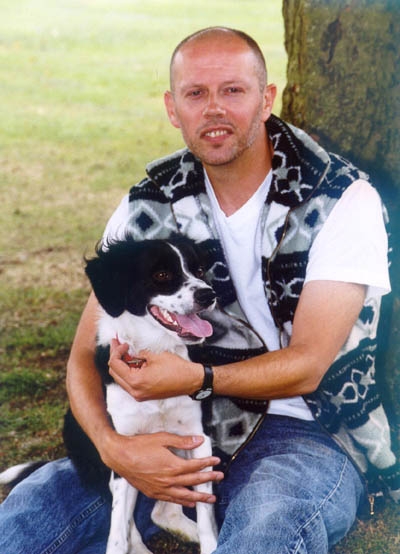 11 Ways Getting a Dog Helped with My Bereavement

When I was 37, my partner died after a long and debilitating illness. On the surface, I was doing OK. I didn’t miss an episode of the TV show where I was an agony uncle. I wrote countless magazine articles. I interviewed celebrities for a daily newspaper, and,  as a therapist, encouraged them to open up their hearts, but mine was frozen over. Nothing seemed to thaw my grief – exotic holidays, a rebound relationship or even, I’m embarrassed to admit, consulting a medium. However, approaching the third anniversary of my partner’s death, I decided to get a puppy and it proved to be a turning point.

Here are 11 ways that getting a dog helped with my bereavement:

1) Provided structure for my life

Being a freelancer, I could stay in bed all day. Nobody was counting on me to do anything. My weekends were blank, unless I phoned up friends and arranged something. When I got Flash – a Border Collie crossed with a Brittany Spaniel – my life began to find a rhythm again. He needed two walks and two meals a day and being a puppy he had to be let out into the garden every two hours. On week days, I started to accompany my neighbour as she took her dog for a walk over the fields behind our houses, and set my alarm so I would be outside at 8.00am. There were also puppy training classes to attend and, when Flash was older, we joined a dog agility club.

2) I no longer came home to an empty house

I had put the lights on a timer – partly to confuse burglars into thinking someone was home – but mainly because I couldn’t bare coming home to a dark and empty house. For the few moments, between locking the car and opening the front door, I could pretend my partner was in and the house would be full of the smells of cooking. The self-deception was so comforting, I was beginning to worry that – even after two and a half years - my grief was as strong as ever. Once I had Flash, rather than ghosts, I would be greeted by a barks, licks and a solid bundle of fur trying to jump up. He was always excited to see me, even if I’d just left him tied up outside the chemists, so my home coming was truly an event. I’d been in the habit of going out a lot – unable to be alone in the house for too long – but with Flash curled up at my feet, I stayed in more and stopped getting over-tired.

I can go to parties, barbecues and other social events on my own and talk to people – but it’s an effort. It’s much easier to arrive with an excitable dog on the end of a lead. Flash would break the ice and give us something to talk about. When he was a puppy, complete strangers would stop me on the street and ask to stroke him. When I took him on the underground, I would get a smile from fellow travellers who were cheered up Flash’s boundless curiosity - and their pleasure would make me feel good too. In these encounters, I had no history. Nobody knew my partner. I was not forever a ‘widower’. I could try on a fresh identity: dog owner.

4) I learnt to laugh again

After my partner died, Valentine’s Day was really hard – not that we really celebrated it but all the loving messages on the radio were confirmation that I was truly alone. On the first Valentine’s Day, after I got Flash, I was feeling sorry for myself. However, Flash caught site of himself in the floor to ceiling mirror in my bedroom. First, he was startled to find another dog in the house and next that it seemed to move at the same time as him. I couldn’t help but burst out laughing. It was only later that I realised, it was the first time I’d spontaneously laughed – rather than faking it to be sociable.

5) Integrated me into the community

I had lived in the village for ten years but, beyond my immediate neighbours, I didn’t really know anybody. I would drive to the nearby train station and go up to London and then at the end of the day drive back home. I would sometimes use the local shops but normally I’d go to the supermarket in the next town. Once I got Flash, I started to walk everywhere. When I took him to the village green, I’d stop off at the butchers, the greengrocers and the post office. I’d meet the same people walking each day and slowly we became friends. As my neighbour said: ‘There’s two ways to get to know people in a village. You either have children at the school or you get a dog.’

6) Brought me in touch with the healing power of nature

There is something very peaceful about nature. The trees were here years before us and will probably be here for decades after we’re gone. In contrast, my sorrow felt very transitory. I loved watching the seasons change, the lambs playing in the fields, the blackberries slowly ripening, the leaves changing from green to yellow and red, the crunch of mud under my boots on a frosty morning.

7) Live in the moment

With a dog, I walked the same paths every day and begin to notice the subtle changes around me. Rather than being overwhelmed with nostalgia about the past or anxiety about earning enough money in the future, I would concentrate on enjoying my walk today and noticing what was happening in the hedgerows now. Dogs are also great mindfulness teachers because they are completely taken with the joy of chasing a ball or immersed in sniffing a lamppost. They don’t compare the fun of the game today with yesterday or wonder whether tomorrow the smells will be more interesting. Dogs live permanently in the present.

8) I understood my mother more

After getting Flash, I was sometimes overwhelmed with the responsibility of raising a well-balanced dog. My puppy trainer had two favourite sayings: ‘Problems are never the dog’s fault, it’s always the owner’ and ‘your anxiety travels down the lead.’ If your dog was aggressive, for example, it was because you hadn’t socialised it properly. If your dog was nervous, it was because you were nervous. ‘Sort out that heel work,’ the teacher would insist as Flash lunged in every direction, ‘or do you want to spend the rest of your life with a dog that pulls.’ One day, I had a sudden realisation – bringing up a puppy had a lot of similarities with raising a child. It was followed by a second realisation: just how easy it was to get it wrong. For the first time in my life, I understood my mother’s defence: ‘I did my best.’ How much harder, it must have been, to bring back a baby from the hospital, to be surrounded by well-meaning advice but basically to be on your own.

9) My family communicates best through dogs

Although we didn’t have dogs as children – one of my biggest regrets – we are now a completely doggy family. My sister has a dog. My nephew has a dog. My niece has two dogs. My mother could show her concern for me by making a fuss over Flash. Dog owning has given my sister and I something to talk about.

10) Brought new things into my life

Bereavement is all about loss and if you’re not careful your life can get smaller and smaller. Recovery is about opening yourself up to new experiences again. Through Flash’s eyes, I fell in love with the English countryside. I became a villager rather than a commuter. I met people from all backgrounds and professions. Flash changed the way I work too. Instead of articles for newspapers and magazines, I broadened my canvas by writing a play about a woman dog walker – who notices everything in her village but the disintegration of her own marriage. It toured the South East of England twice and I’ve since had about a dozen of my plays produced. I kept a journal about the ups and downs of training Flash and that’s become a memoir which has just been published.

When my partner was dying, a well-meaning friend told me: ‘You’re a therapist, you’ll know what to do.’ I wanted to believe this sweet lie but the truth is nothing prepares us for loss. What was particularly unsettling – considering it is my profession – was that therapy didn’t really help. It was getting Flash that proved to be my turning point – for all the reasons above. However, I didn’t realise that he had one more lesson to teach me about loss. A few weeks after Flash died in 2011, I wrote in my diary: ‘It's not fair that we can live for three score years and ten but our constant companions don't make it much past the ten. But on second thoughts, that's also dog’s great lesson for us - impermanence. Nothing lasts forever and perhaps dogs have been put on the earth to remind us of this inescapable truth.’ So what have done with this knowledge? I try to adopt the mindset of a dog and live in the eternal now. To make certain I don’t forgot the lesson, I’ve let another dog into my life. Pumpkin is a Labrador cross and in many ways, he couldn’t be more different than Flash, but he’s working the same sort of doggy magic.

Andrew G Marshall's latest book is called The Power of Dog: How a puppy helped heal a grieving heart, published by Red Door