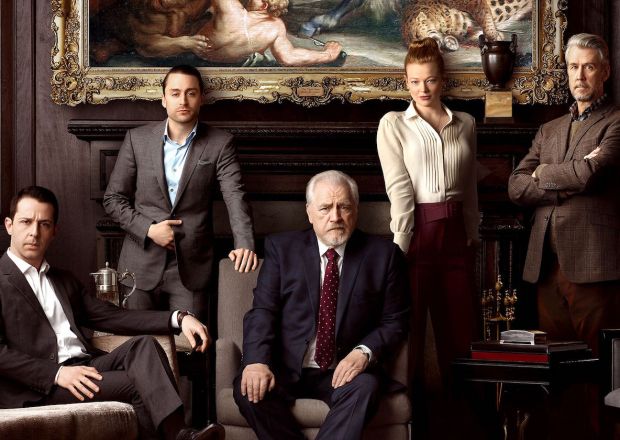 Succession, the HBO satirical drama sweeping up awards,  is mesmerising not just for the quality of its writing, performances and locations. It’s also a depiction of a dysfunctional ‘super-family’ of a kind we seldom see up close.

Brian Cox plays Logan Roy, the ageing patriarch of a global media empire with offshoots like cruises and amusement parks (think a mash-up of News International and Disney) who survives a heart attack in episode one. The unfolding of the narrative over the next two seasons concerns who’ll take over the now-shaky company. It’s The Godfather in glass-sided New York boardrooms. But this is no criminal underworld, it’s a mega-corporation operating in plain sight. At least, as plain sight as mega-corporations ever do.

According to research, four per cent of CEOs are psychopaths and Logan Roy could be one of them. And if 29 per cent of corporate psychopaths are also bullies he’s certainly one of those. He lacks empathy, has no conscience about his venal behaviour and if he does care about his children he has a funny way of showing it. He insults and belittles them, lies to their faces and plays them off against one another like a patriarchal chess champion. Power and ego are more important to him than caring or concern. He promises something to one, then behaves as though it’s going to another. As one of them puts it, go against Logan and: ‘He will send men to kill your pets and fuck your wives.’

Connor, the eldest of the four adult children, is a no-hoper fantasist who wants to run for President (remind you of anyone?). Second son Kendall is perhaps the obvious successor but has addiction issues and seems out of his depth. Roman is an immature joker who doesn’t take his responsibilities in the company seriously yet wants the top job. Youngest daughter, Shiv, seems savviest of the lot, perhaps illustrated by the fact she doesn’t work for daddy but as another powerful man’s political fixer. But she’s married to top executive Tom, who runs a division, keeping everything solidly in the family. All of them vie for parental attention and approval like starving dogs snarling over scraps.

There are shades of the Murdochs, Trumps and other super-rich family-run businesses where the question of who’ll take over when the old man (it’s always an old man) goes is a source of speculation. With echoes of the Kennedys for good measure.

Witnessing the brutal way Logan treats his children, you wonder why they don’t just walk away and forge their own lives without endless nail-biting family weekends drinking the finest champagne while their father sets them against one another. One answer is money. Like when Connor tells his father things are a bit tight and could he bankroll him ‘a hundred mill’.  It’s not uncommon for clients in therapy to say the bars of the golden cage are a factor stopping them telling a toxic parent where to go.

But it’s more complicated than that, which is why Succession, like all the best fiction, touches on universal themes. While marvelling at the lifestyle, exotic locations and startling amounts of cash washing around we recognise themes of bully-boy parenting, narcissistic abuse and outrageous manipulation. Therapy rooms all over the country are full of clients talking about exactly that right now.

It’s utterly normal, in a dysfunctional way, for adult children to crave parental approval even when that parent is insulting, withholding, bullying, controlling and unpredictable. In the finale of season two, the siblings are chatting when their father’s helicopter hoves into view prompting the comment:  ‘Emotional gunship incoming!’ And it’s not just rich kids who endure parental volleys from emotional gunships.

Logan’s volleys aren’t just verbal.  At one point he lashes out and hits Roman in the face. Hard. Afterwards in a rare stab of conscience he asks ‘Are we OK?’, and Roman compliantly minimises and dismisses what happened. It’s like an adult-child version of Stockholm syndrome – the psychological condition whereby hostages side with their captors. And an illustration of how children become conditioned by difficult, unloving parents to tolerate, excuse and rationalise away behaviour that is entirely unacceptable.

We also see playing out on screen what psychotherapists call ‘identification with the aggressor’. So the Roy kids behave in horrible, uncaring ways themselves. They insult one another and underlings, drop lovers without a word (getting an assistant to tell a new amour they’re on the next flight out, for example), behave in venal self-serving ways and revel in other people’s suffering and humiliation. As when Roman says ‘I like hurting human beings as much as the next guy, but this is really ****ing good.’

Plus the sibling rivalry makes Cain and Abel look like a couple of buds. These people don’t kill one another, they torture one another slowly. Jostling for daddy’s affection and approval in the vain hope they’ll get something they’ve never had from someone incapable of giving it. They also suffer the issues that can dog people with this kind of a childhood. Substance abuse (Kendall); sexual dysfunction (Roman), and difficulty with intimate relationships (just about everybody).

Separating yourself emotionally from a manipulative parent is one of the hardest psychological tasks there are. We only get one family - one father, one mother (although step-parents, biological parents and adoptive parents can be manipulative too, obviously). You can attempt to create a loving family of your own to make up for it but as Sigmund Freud recognised, the mechanism of the ‘repetition compulsion’ means individuals from families like these often fall for people similar to their abusive parent (Freud saw this as the unconscious trying to create a reparative experience for itself – like, ‘If I can get this selfish, uncaring person to love me it’ll makes up for the fact my selfish, unloving father/mother never did’). Or people repeat a different way, treating loved ones the way their parent treated them: criticising, haranguing, favouring one child over another and so on. This is how dysfunctionality dances down the generations.

Plus people internalise the ‘bad’ their parent made them feel: ‘I must be have something wrong with me or be a rotten person for my father to treat me this way.’ That thought becomes a core belief and can take years to unravel and replace it with something healthier. People do manage it. And therapy helps you get there faster. A good therapist will observe, reflect and question the negative assumptions you’ve made while modelling a kinder, more caring way of relating to yourself.

What can you do if you see a little of the Roys in yourself? Awareness is the first step. Recognising all the ways having a difficult, selfish, manipulative or abusive parent has impacted you. Then you can begin the task of working through the feelings involved and thinking how you might behave differently in order to protect yourself in future.

It’s easy to underestimate just how painful this can be. The difficult feelings that come up can be extreme – pure rage or weeks of crying. Meanwhile it’s easy at this point to get stuck in behaviour designed to make your parent see how ‘bad’ they’ve been and try to get them to change. Getting past this is a task in itself. People in their forties, fifties or even sixties can still get  worked up about mummy’s bad behaviour, manipulation and frigid unlovingness. Even if mummy is long dead.

Is forgiveness the answer? Some people manage to forgive their parents, but many don’t and recover anyway. Some decide to cut off from their family and others withdraw in less drastic ways by stepping out of role and altering their own sides of the emotional games. But, of course, manipulative parents are experts at sensing the slightest pulling away and can up the ante so the emotional gunships are firing neutron bombs.

A third season of Succession has been commissioned but it’s hard to see a happy ending for the Logan siblings. In therapy, though, people can and do leave the gunships behind – or at least learn not to stand in the firing line.

Wendy Bristow is a verified welldong.org therapist in London N1