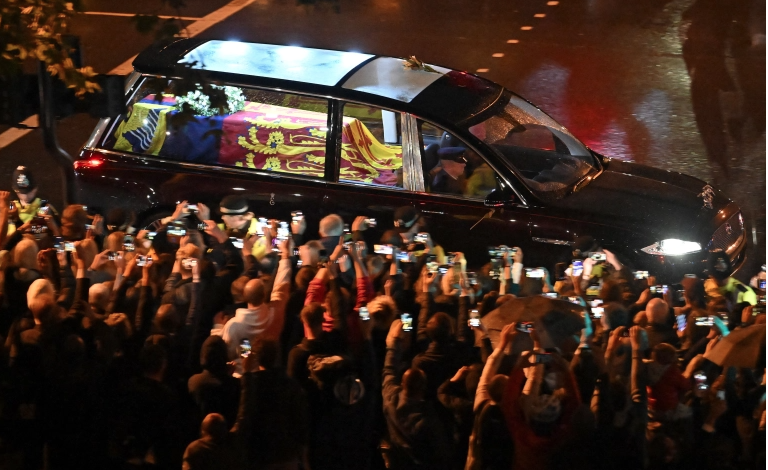 The loss of the Queen is terrifying for some of us, however we felt about her personally. She seemed larger than life, and the ordinariness of mortality can shock us to the core. We knew she’d die. We knew it intellectually. But emotionally? It’s disorienting and destabilising, to say the least. It’s also disruptive and uncertain for what exactly will come next. Is her end the end of the monarchy? We’ve lost a giant mother. It’s strange and leaves an identity void. The temptation to fill it quickly subsumed some of us. Others want to just see it all play out. Either way, let’s acknowledge the strangeness that each and every one of will die – no matter how much we live — as the Queen has shown us.

I have spoken to many people who have described being ‘ambushed' by their sadness for the Queen’s death. We have been living through extraordinary times of late – Brexit and Trump’s presidency marking the start for many, and then the pandemic – and the Queen’s constant and steady presence represented an antidote to such flux. Her death has exposed us to our desperate desire for calm, and perhaps, made us realise how much we took her symbolic ‘maternal gaze’ for granted.

As we mourn the loss of Queen Elizabeth II, it can stir up our own feelings about loss and endings. It is further complicated by the fact that we feel we both knew Her Majesty but, similarly, we didn’t.

People have very conflicted views of death, almost like it is an enemy that needs to be conquered or an inconvenience that needs to be ignored. When we are confronted with death, especially of someone who has been so consistent in our lives, we are forced to confront a difficult reality: that of our own mortality. We can either conquer it or ignore it or we could take this opportunity as a moment of personal growth.

Nabokov says that "Life is just one small piece of light between two eternal darknesses". May the Queen's death allow us some light in and give us a moment to really see ourselves.

In many ways, the Queen is a symbolic parent to the whole country. Her roles were strongly associated with care, safety and protection, and stability through difficult times, which is why her loss might feel so personal and painful. It might well remind us of the loss of our real parents.

There’s a Chinese curse which goes "May you live in interesting times". These past two years, with the pandemic, Brexit, war in Ukraine, a new prime minister ... and now the passing of our sovereign Lady, Queen Elizabeth II, I feel for one that I have had as much change and turmoil as I can deal with at the moment. Hence my trip today (I am writing this as I sit in a departure lounge).

Her Majesty embodied duty and service given freely and without hope of reward except knowing she was carrying out her God given destiny. Change is always challenging. We don’t know what lies ahead. May we look back at our late Queen and see the light she has shone ahead of us to light our way into the future with faith hope and love.
And let us help one another on our individual journeys with cheerful service. Amen.

The deeply sad news of her Majesty Queen Elizabeth II’s passing came as an upsetting shock to me and, no doubt, many others the world over. She was a very private lady and yet we have been fortunate to see her on TV and get to know her a little, as she encouraged us on during difficult times. With her gentleness, authenticity and integrity, she endeared herself to our hearts effortlessly.

Many of us are grieving together, collectively, because we all sense that there will not be another female leader and monarch quite like her. Her strong sense of service is what gave her spiritual maturity which created both an inner and outer beauty of glow. You only had to see her smile when she was collecting flowers from children to see what I mean. She was a role model who inspired me and the world over.

As we enter a phase of collective grief, many of us will be feeling a profound sense of loss of a public figure who offered us continuity and calm assurance. She ‘held us’ through many difficult times – the way a loving mother or grandmother might.

The news of not only a Monarch, but also a mother, grandmother and great-grandmother passing away may activate our own personal losses of those whom we loved and admired and were grateful for having in our lives. Intentionally processing our grief and gratitude is crucial to our wellbeing.

Philippa Perry on the Queen: "She's probably dreamed about more than anyone else"

Julia Samuel: "The pandemic made us all feel grief and loss"

4 ways to support someone who is grieving