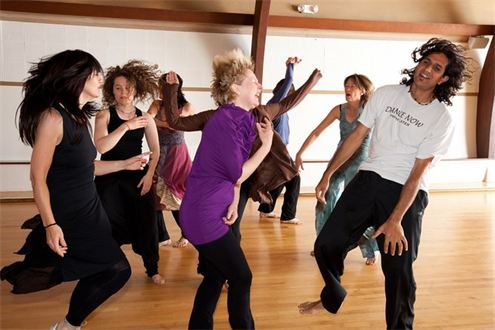 Now put the two together and you have yourself a very alternative way to spend your time.

It was with this in mind that I blindly followed my friend into a church in Vauxhall on Saturday night. The space was lit with flickering candle-light and the smell of incense was overwhelming.  Various free-spirits festooned the pews, stretching and deep breathing, as if preparing to embark on a marathon of mind, body and soul.

I thought I’d unwittingly stepped into the set of Eyes Wide Shut.

The class/journey began with a type of dance much like free-association -  we were encouraged to be lead by our bodies rather than our minds, to move with the music and just not think about it. This is much easier said than done. I thought I’d unwittingly stepped into the set of Eyes Wide Shut. The teacher, who incidentally had a voice like molten velvet, then gently coaxed us into “finding a dancing partner”. This is where it got tricky. In a world where we are so hyper-aware of what everyone is doing all of the time, a world where we scrutinize and package ourselves through various Instagram filters, letting go of your self-consciousness is hard.

“When you feel discomfort, it means you are on the edge of your own boundaries” says the teacher-cum-guru. If that’s the case, by this point I’m dancing on my precipice. Yet somehow, after a while you ease into it, and feel an intense sense of relief that the room is a place free of judgement. The atmosphere is filled with a united desire to come together… it somehow feels humane. And everyone’s vulnerability is at once endearing and reassuring. Such dancing really does feel like freedom.

And then the velour blindfolds came out.

This is where the tantric part came in to play. We were soothingly told to put our blindfolds on, and shake our bodies for seven minutes while listening to the music. That’s a very long time to shake your body. After the manic shaking session a strange feeling of light-headedness accompanied a feeling close to euphoria, and finally it all made sense. This was where life junkies come to get their fix.

It’s a rare thing to be able to connect with strangers on such a fundamentally human level.

The next phase of the tantric trance was about channeling our inner-animal; we were encouraged to roar and scream, but not invade anybody else’s personal space. I gave it a go, but the screeching felt contrived, and wasn’t really doing anything for me. I found myself acutely aware that to the right of me stood a man aggressively hissing and growling, and to the left of me a woman who sounded as though she were in the throes of orgasm.

Despite feeling uncomfortable aping around to a soundtrack of the rain-forest, I emerged from this stage of the dance with an appreciation of my physicality, and an intense desire to respect and value my own body.

The class came to an end with a  lie-down and a few moments of silent meditation, before bidding namaste to the other people in the room. It’s a rare thing to be able to connect with strangers on such a fundamentally human level. Practices such as ecstatic dance and 5 rhythms aren’t "hippy orgies", they’re a meaningful way to connect with yourself and to others,  to challenge your own ways of being. From my experience, I would say that stepping out of my comfort zone was a good thing, and bodily meditation  through dance offered me a therapeutic experience I wouldn't have predicted.