Stuart Sandeman: How Breathwork Changed My Life
Find a therapist
Find a coach
Join as a practitioner
Log in/register 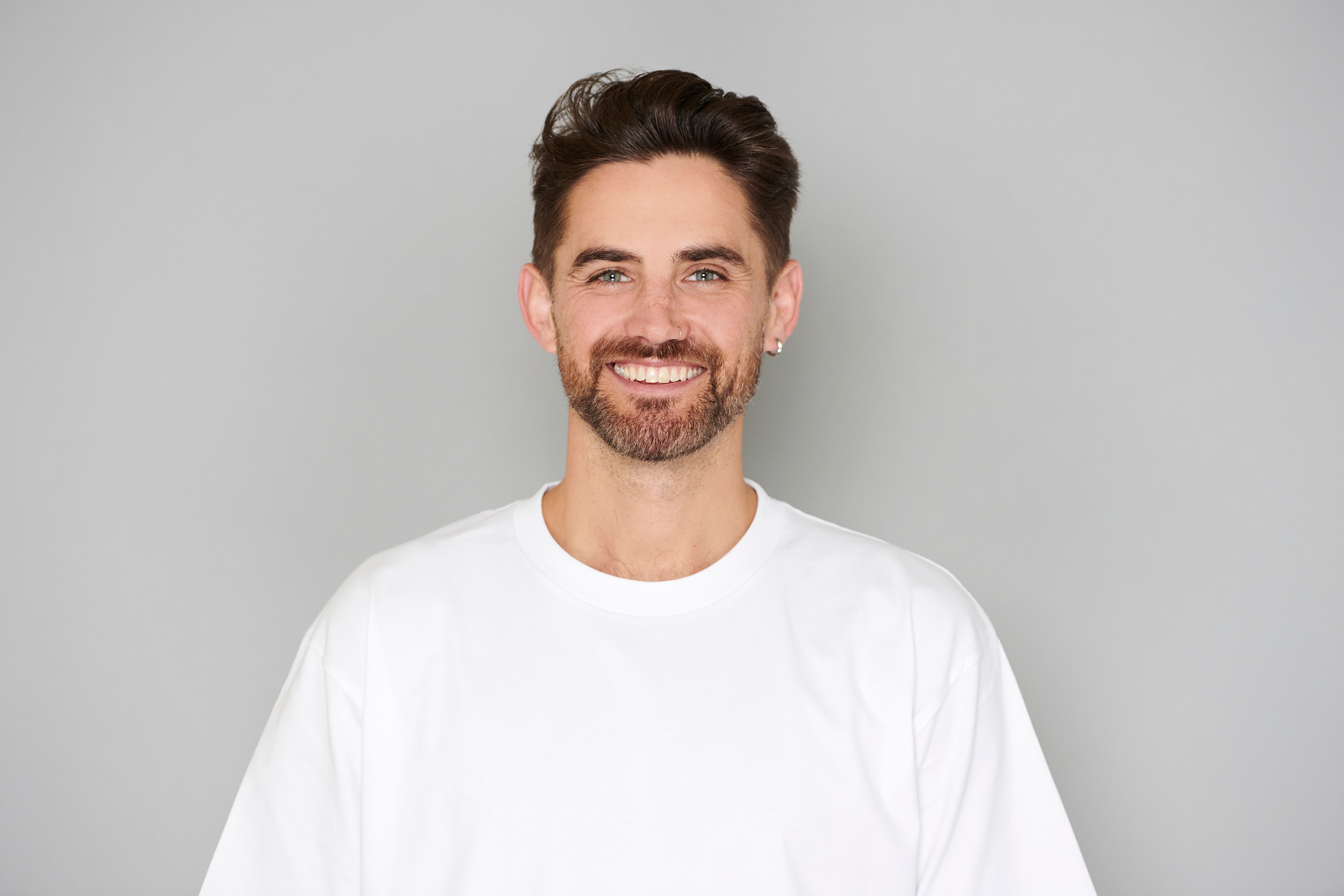 I squeezed her hand three times. It was our code. I’m here. I care. I love you. I had to be strong for her. But as I stared across the desk at the doctor reading his notes, I was barely breathing. My knee bounced restlessly.

It was only a couple of months earlier that my girlfriend, Tiff, had found a pea-sized lump on her chest. Until that day we’d been having the time of our lives. She was 30, and a fun-loving fashion buyer. I was 31, a DJ without a care in the world. But then cancer joined our party and dragged the needle violently across the record of our lives. Now we were here, sitting in silence in the oncology unit of the UCLA Medical Center in Los Angeles, waiting for the specialist to give us the news.

It may only have been a couple of seconds before the doctor spoke, but it felt like hours. He took a deep breath, preparing us for what he was about to say. "The scans confirm your cancer has metastasised. We’ve found tumours in your liver, spleen and brain."

Western culture does not encourage us to face death when we’re still very much alive. So it’s a hard thing to process when you become aware that someone you love might die. I did what I’d always done: hid signs of weakness, buried my emotions, coped the only way I knew how. Be strong. Be tough. I turned to Tiff. There were tears standing in her eyes. "We’ll beat it," I said.

Being strong came naturally to me. I’d grown up in Scotland with a teddy bear called Tough Ted. I had Rocky posters on my wall. I’d trained in judo since I was four and was a black belt by sixteen; I was Scottish champion for years. I lived my life this way. Cancer was just another opponent. As for Tiff, she was from Taiwan, but grew up in New York. She was smart, incredibly well read, streetwise. She knew how to hustle. Together, we were determined to prove the doctors wrong.

In the year that followed that conversation at the UCLA Medical Center we did everything we possibly could. We travelled from LA to New York, from London to Taipei, searching for a cure. We saw experts, consultants and doctors. We even met healers, shamans and monks. We promised each other that we’d be open to anything, that we’d try everything. Yet nothing seemed to work. Her health started to fail.

And then, six months later, something miraculous happened. It looked as if the cocktail of chemo and surgery, juicing and meditation, was paying off. Tiff started to show signs of recovering. The doctors said they’d never seen anything like it. She seemed to be coming back from the very brink of death. Her brain tumours had gone, her seizures had stopped and her smile had returned. It was as if the thing no doctor had said was possible – that Tiff would actually get better – was about to happen.

Encouraged by this, I left her bedside. I needed to fix the leaking roof of my apartment; I had been putting it off for months, and it wouldn’t take long. But as I was on my way back, flowers in hand, I noticed four missed calls and a text from Tiff’s mum. My heart fell. Somehow, I knew what it would say before I opened it. "Get back asap. Tiff’s heart has stopped."

"The doctors can’t do anything."

When Tiff passed away, I couldn’t think. I couldn’t feel. I busied myself with all the practicalities of death: supporting her mum and arranging the funeral. When it was all over, I shut down. I didn’t know how to express my emotions. I didn’t know how to cope with loss. I bounced between outbursts of anger and complete withdrawal. I thought that pushing everything and everyone away was a way of dealing with my grief, but it wasn’t. I couldn’t engage with the world or find my place in it without Tiff.

The image of strength I’d always projected was beginning to show cracks. I needed something else. I’d always thought of myself as a logical thinker, and I considered this a good thing. I came from the world of performance and science. As well as training in judo I studied mathematics at university, and went on to work in finance. Even when I made a dramatic career change, swapping the chaos of the trading floor for the nomadic lifestyle of a DJ, I did it with my eyes open: gathering information, assessing risk, making the change and then observing the results. That’s how I did things. What Tiff’s death showed me, in the most tragic way I could ever imagine, was that there were shortcomings to this approach.

It was a long eight weeks after Tiff’s death that I found myself, by chance, in a breathing workshop with my mum. It was a gift I’d bought her for Mother’s Day. We took our shoes off and entered a room bathed in natural light, with high ceilings and colourful embroideries on the walls. Ambient music filled the space; the plants and statuettes seemed to be singing. I could smell the burned-pine scent of palo santo, the ‘holy wood’ incense shamans had used in Tiff’s healing sessions.

"Hello," said a smiling woman dressed in white. "You must be Stuart. Come, take a seat in the sharing circle."

My gaze fell on the rest of the group. My heart sank. Jeez, I thought. I hate this sort of thing. Can you blame me? Over the past year I’d seen enough medicine men and healers to last a lifetime, and all of them had claimed to have miraculous cures for whatever ails you. My tolerance for anything that seemed even remotely ‘spiritual’ had worn thin – and that was before the ‘heart-shaped stone’ was pressed into my palms and I was asked to ‘share my intention’.

"I’m Stuart," I said, sheepishly. "I recently lost my girlfriend to cancer. So I intend to feel, um, a little lighter, I guess."

Despite my cynicism, I was grateful for the looks of love and support I received after saying this, even if I felt pretty awkward at the same time. But if everything that had happened so far during the workshop wasn’t enough to take me out of my comfort zone, what came next certainly made sure of it. I was shown a method of breathing that involved lying on my back, and alternating between heavy breathing and what looked like having a tantrum. If only Tiff could see me now, I thought.

On went some New Age trance music and everyone in the room began to huff and puff. I opened one eye to check the whole thing wasn’t some elaborate prank. But my mum seemed to be getting into it, and the workshop was my gift to her. I wanted to be there for her, just as she’d been there for me. All I had to do was play along. In for a penny, in for a pound.

After a couple of rounds of breathing and shaking and shouting, something pretty bizarre happened. I could feel electricity surging through my entire body, the kind of vibrations you feel when standing in front of a giant festival speaker. Lights danced and flashed behind my eyes. A giant wave of emotion roared up inside me. And then, for the first time in as long as I could remember, I cried. I cried and cried and cried. And not only did I feel the weight of grief being pulled off me, but I felt as if a lifetime of tension I’d unknowingly been carrying around was dissolving into the atmosphere.

I felt a strong presence surrounding me and had the very distinct feeling that Tiff was there, holding my hand. I still get goosebumps when I think about it. It was weird. It was powerful. It was life-changing.

Even in my grief, I knew that my experience wasn’t logical. Nothing about it made sense. My rational side could only see two possibilities: I’d either completely lost the plot or someone had slipped a hallucinogen into my drink.

I asked one of the facilitators about what had happened. Was my experience normal? What had I just gone through? Her amethyst earrings glinted in the light. She smiled.
"You connected with spirit," was all she said.

That response might have been enough for some people, but it wasn’t enough for me. I needed to know what had happened and in a way my brain could understand. I had questions that needed answering. It was time to get to work.

Stuart Sandeman is the founder of Breathpod and the host of Radio 1's Decompression Session. His new book Breathe In, Breathe Out: Restore Your Health, Reset Your Mind, and Find Happiness Through Breathwork is out now.

5 tips to help after the grief of losing your partner

How to navigate hard conversations after a terminal diagnosis