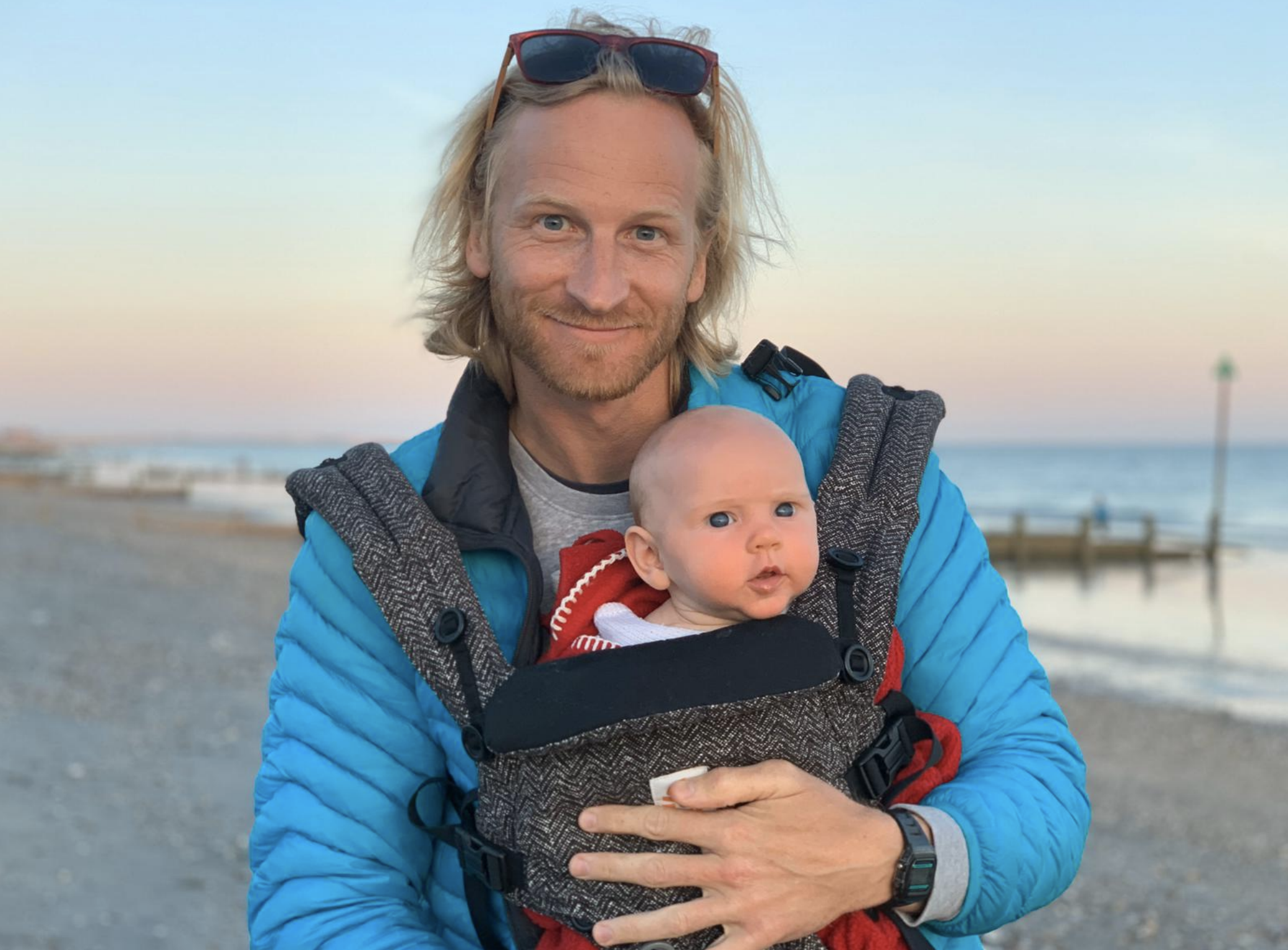 What I've Learnt About Men's Mental Health and Vulnerability

Like many other men, on the surface it looks like I have life pretty sorted. At the age of 36 I’ve got a wonderful partner, a new baby, a house, a supportive family and friends. I’ve lived and worked abroad for five years, completed a dream trip of cycling 10,000 miles from Malaysia to London, co-founded a business and been back to university to study for a Master’s degree in positive psychology.

But underneath this 'successful' exterior I’m a man with deep insecurities and anxieties that prevent me from sleeping more than five hours per night, connecting with others and generally enjoying life. You might question why someone with these sorts of issues is qualified to advise, but having experienced mental health disorders, had professional help and tried a lot of alternative coping strategies, I have learned lessons, some of which may be of use to you.

The biggest learning through my mental health journey has been the importance of opening up. It’s so easy to say and so hard to do, but talking to your friends, family or colleagues is the best step you can take to improving how you feel. In recent years, I have opened up about my mental health challenges and shared vulnerabilities from my past, such as how I had a tough time at school, being bullied both physically and emotionally. I worried that people would reject me, but in fact I have found the complete opposite, with others empathising and sharing their own life challenges.

So much has been done to reduce the stigma around mental health and we are slowly redefining what it means to be a man, but there is still a long way to go. According to the World Health Organisation (WHO), at the time of writing the global suicide rate is a staggering one person every 40 seconds, and twice as many suicides are male, perhaps principally because men are less likely to ask for help. So why not try having some deeper conversations with your friends? Show some vulnerability about how you’re feeling and see how they respond. Let’s create a world in which it’s totally normal to discuss how you’re feeling.

Traditional masculinity in a modern world

My perception of the traditional narrative around masculinity is that boys have to be tough, taking life’s adversities on the chin, not showing weakness. This conventional view that masculinity is about strength, courage and independence perhaps worked in the distant past, when we had to be the protectors and hunters for our species, but in the modern world these traits are purely admirable, not essential, particularly when you are doing yourself harm to maintain them.

In reality, it wasn’t beneficial for me to be what I thought was courageous in the face of bullying, trying to avoid showing weakness by not admitting it to anyone. In fact, trying to live up to these perceived masculine ideals only prolonged and worsened my situation, as no one knew I needed help. Being vulnerable is being human, and having the courage to admit weakness is a sign of strength in your character.

As men, at least in Western societies, we’re often described as not being as in touch with our feelings as women. Because of the way we are generally socialised with masculine stereotyping from a young age, our ability to deal with emotions has been consistently undermined. There’s actually a term for this in psychology – normative male alexithymia – which defines a situation where the way that men are brought up to behave in society conflicts with the emotions that they feel and express.

This totally fits with my own experience, having grown up believing that men don’t have feelings like women do. But this is absolute nonsense; men, women and, in fact, humans with any gender identity feel emotions equally; the problem is that men are encouraged not to show them. I think some of us suppress our feelings so much that we don’t even realise that we’re doing it. I’ve spent most of my life repressing my emotions so that I can present what I think is the 'correct' or 'socially acceptable' version of myself to the world – regardless of how I’ve felt. Perhaps you can identify with this?

Every guy can relate to being told to 'be a man about it' or 'take it like a man'. Being tough and getting on with life can be a useful strategy at times, but at others it can be damaging. It’s so important to be open about what you’re going through. Not opening up about being bullied and repressing all the negative emotions that went along with that had long-term adverse consequences for my mental health. I have spent 20-years trying to undo and manage the resulting trauma. Can you think of times where you’ve had to take an experience 'like a man', despite knowing that it’s damaging you? You might be holding on to that negative experience, but with time you can learn to release the unexpressed emotions and unburden yourself.

As men we’re generally not encouraged to be open with our thoughts and feelings. I remember frequently locking myself in the toilet at school and crying my eyes out – it was the only safe space I could find to get away, be vulnerable and feel better. Crying is a totally normal reaction to negative emotions and is a natural response by the body to improve your state of mind by activating the parasympathetic nervous system (aiding relaxation) and releasing oxytocin and endorphins (improving your mood).

In fact, if you don’t let yourself feel these negative emotions, then you will carry that negative energy instead of releasing it. Have you ever noticed how you feel so much better after you have let yourself cry? I now want to cry more than I am able to! I’m learning how to get in touch with my emotions. So if you feel like crying, let it all out. Your body and mind will thank you for it.

Our society has traditionally celebrated the 'alpha male' – the most successful and powerful male in a group who likes to be in charge of others. Men who are dominant and limit their emotional range primarily to expressions of anger have been the holders of power and wealth for centuries. Studies of social animals have shown that individuals exhibiting alpha traits gain preferential access to food and sex. Luckily, qualities that are less 'alpha', such as empathy, are being celebrated in modern society, but the underlying natural bias toward alpha males remains. When extroverted, competitive, unemotional males are celebrated by our culture, it’s difficult for men who don’t fit that image to express themselves authentically.

Men who don’t show the classic alpha male characteristics are often labelled as 'beta males'. This is a term which has historically been used to describe men who are largely submissive, passive or subservient – all traits with arguably negative connotations in mainstream culture. So it’s no surprise that many of us, including myself, have tried to portray alpha traits despite feeling much more beta inside. It seems to me that more recent positive descriptions of the beta side of the male persona, such as being sensitive and emotionally intelligent, are helping to improve perceptions of men who don’t exhibit the traditionally revered alpha tendencies.

Why is not expressing emotions often viewed to be 'acting like a man'? Perhaps we need to move away entirely from old-fashioned notions of masculine and feminine. Humans experience a wide range of emotions so why do we feel the need to assign a gender stereotype to them?

The power of vulnerability

Wanting or needing help is nothing to be ashamed of. Showing your true self with all of its imperfections is the simplest and most powerful way to drive the conversation about male mental health forward. As humans, we are made to connect with others; this is what gives our lives purpose and meaning. Contrary to our prevailing male culture, I have learned that sharing my perceived weaknesses draws people toward me, not away from me. The best friendships I have are those in which I have shared my whole self, not the self that I think others want to see. By being truly vulnerable with others we build trust and that is the foundation of connection, which we all need to have good mental health.

We all have mental health and if, like me, you sometimes struggle with yours, remind yourself that it’s totally normal. Life can be tough and your experience of it is totally unique, so the way that you will manage it will also be unique.

We all need to play our part in continuing to reduce the stigma around mental health, treating it just as seriously as physical health, increasing knowledge of the different types of disorders and being less black and white in our diagnoses of them. Opening up and showing vulnerability with your friends and family is the quickest and most effective way to improve your mental health and to show others that it’s OK to do the same. Look out for your friends. They, like me, might seem like they’ve got life all figured out while in reality on the inside they may be really struggling.

Charlie Hoare is author of MAN DOWN: A Guide for Men on Mental Health. You can find him on Instagram @slowdowndoless.

The shocking statistics of male suicide