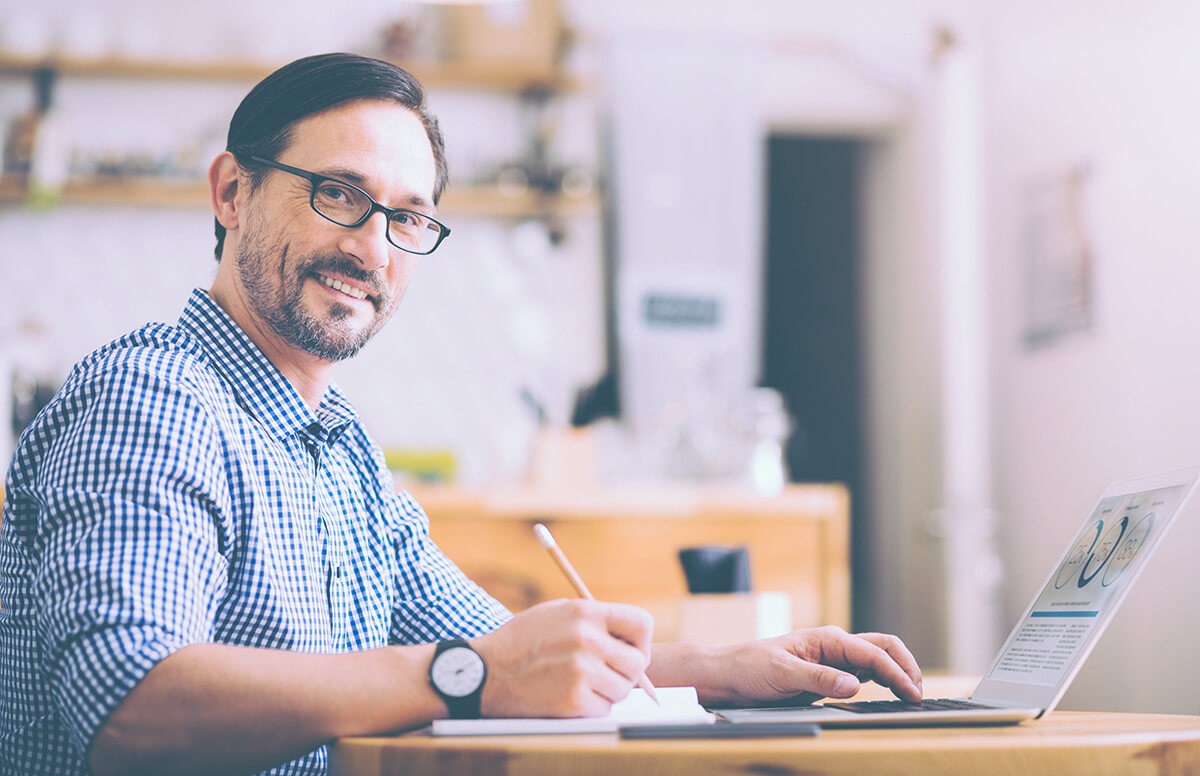 I want to tell you how you can move from feeling a victim of life’s challenges to becoming once more engaged and on the front foot. Up for it, and ready to go. So that you will see change – even redundancy - as something potentially positive.

I speak from experience. I found myself, 25 years ago, in a dark place. The company I had successfully co-founded and run for 14 years had been hit by a number of headwinds. These included the 1982 recession, and our bank pulling out funding because it was itself going bust. We ended up having to sell the company for £1.

My share in the company had been valued just 12 months before at £5 million. It was now worth nothing. So, in my early fifties, I found myself with no income, no pension, and a young family to support. But I couldn’t wallow in my feeling of being a victim of malign events for very long.

This year, Reddoor published my book Generation Cherry which lays out in detail the coping mechanisms and mindset I have developed over the past 25 years, which seem to have worked. And from the positive responses I have received, they seem to work for others too.

I do not pretend they are easy. But they are effective.  They provide hope, and solutions. Loss of income, whether through redundancy, business failure, illness or other forms of bad luck, can become a source of regeneration. Change can feel threatening and negative, but often turns out to be an opportunity to re-group and set sail in a new and more exciting direction.

They say that good often comes out bad, and it’s often true. A setback can become redemptive rather than destructive. Instead of seeming the precursor of an empty, anxious, fearful life, such events can be the beginning of a life that is rich, positive and fulfilling. Indeed people losing their jobs often say it was the best thing that could have happened to them.

Before moving to the four key mindsets that I have found so useful– the Four Autonomies, which see you taking back control of key areas of your life – it is wise to engage with some groundwork. I call it developing Enlightened Thrift. Enlightened Thrift is a shift in perception on your possibly diminished income or cash resources.

It describes an attitude to life that embraces living on just the basics. Seeing thrift as cleansing and positive, not as something to be feared or resented (though these emotions are understandable).

Seneca, the Stoic Roman Philosopher, was a pioneer in this field. He advised his followers to copy his example in taking the fear of poverty head on. One day every month he would wear the poorest of his clothes, and eat little food, and ask himself the question, “Is this the condition I fear?” By accustoming himself to poverty he believed it reduced its fear for him.

A more positive way of looking at it is to reflect on the fact that all the worthwhile things in life have no monetary value. Music, friendship, love, jokes, laughter, walking in the countryside, sunsets, birdsong all have great value, but none of it is financial. Enlightened Thrift is a combination of embracing the combination of cleansing yourself of the unnecessary clutter of stuff – things you don’t really need. And appreciating more the things that are free, and are of huge personal value.

Enlightened Thrift not only removes much of the fear of living on less, it also has many benefits. One of these is particularly relevant to people who have children or grandchildren.

Spending less on kids’ entertainment or toys is shown by research to create a closer bond with children than those whose relationships are more, in sociologist-speak, mediated by objects. This, in simple terms, means you can build closer relationships with children by spending time, and playing with them,rather  than by buying them expensive presents.

For many, the possibility of survival on just a state pension is incentive enough to keep earning. But even if you are relatively comfortable financially, there are good reasons to stay involved in work of some kind. With 20-30+ years ahead, as well as extra income, there is an opportunity to have a stab at something you have always wanted to do, and stay plugged into society in a much more enjoyable way.

Let’s be clear, earning doesn’t necessarily mean having a job. If you love the career you are, or were, in, that’s fine. The reality is, however, that jobs, along with retirement, are concepts that are past their sell-by dates. Of course some jobs will continue to exist – doctors, teachers, lawyers, jobs in government, and corporations, etc, but for an increasing number of us, it is more relevant to think in terms of work, rather than a job.

For many of the younger generation this is already the reality. The gig economy can be exploitative, but it can also be a huge opportunity to match your skills and interests to what the market has a need for. The creative industries (music, design, etc;) the IT industry (web design, etc), even professions like accountancy and the law are fragmenting, and allowing the independent operators – gig workers – to provide tailored services.

Part-time work can be rewarding and fulfilling. Apart from working on a time restricted basis in your current line of work, there is the chance to experiment in other types that might turn out to be both interesting and lucrative. Keeping an open mind, and not resisting change are key to enjoying, and benefiting from the process.

The opportunities to find work on the internet are endless. From selling things on Ebay, or Etsy, hosting on Airbnb, to finding chunks of conventional work online. The crucial thing is that having work, rather than a job, gives you a chance to be in control. You are autonomous, not reporting to a boss, in a job.

Even a few days – or hours - a week will bring not only financial resilience, but will keep you connected to the wider world. You will be engaged in life, rather than a retired or redundant spectator. You will still have skin in the game.

You won’t just be an ex-Y…You’ll have a sense of selfworth, because you an active X…. You will be a contributing and involved member of society. You will have autonomy because you are in control, with a degree of financial independence, and embracing the changes providing the opportunities for independently generating income in the evolving overall workplace.

Keeping learning is critical, because if you’re not learning and growing, you are shrivelling and dying.  Like earning, learning new skills, or refreshing old ones keeps you actively engaged, involved, interesting and interested.

It gives you more to contribute, and your perspectives will be constantly refreshed. Your opinions will be more valued, because they won’t be parroted them from the newspaper you read or the TV channel you watch.

Learning is the absorption of knowledge and wisdom on many fronts. It can be work-specific – tuned to your current, or potential future area of work. Or it can be wider in scope – exploring areas of interest that may reveal your purpose in life, if you have not already discovered it.

Finding your purpose is not straightforward, but as you get nearer to uncovering it, you can find work in which you can find meaning. Discovering meaning leads you to find work that doesn’t seem like work at all – it’s just what you love doing anyway.

For general learning, I have what I call Wisdom Wednesdays. It can be any day of the week, but it is a specific chunk of time put aside to read articles, watch TED, or Do lectures, or Simon Sineck talks on You Tube. It gets the brain working, and you become better informed on many aspects of business and life in general.

Importantly, it means you will still be growing as a human being.

Giving is a crucial autonomy. Whether it be money, in kind, or time, giving is within your direct control but at the same time brings reciprocal benefits.

The "helper’s high" is a proven psychological state – being uplifted yourself by helping others. Sharing and giving is massively psychologically rewarding. It strengthens self-worth and actually improves your health. It can even help you lose weight.

There are many other benefits. As most kinds of giving are social in nature – volunteering, for example – it contributes to social cohesion. This is especially important at a time of straightened social security and health budgets. And lighting the fire of imagination by spending constructive time with grandchildren can be life-changing for them, and hugely rewarding for you.

Helping in the community – or just spending time with a friend or relative with a physical or mental health issue – is a two-way win. And with isolation and loneliness one of the most challenging issues of our time, just sitting with someone again brings a significant win – for you, the person you are spending time with, and the community as a whole.

And it’s worth bearing in mind that giving can also involve learning and growing too. If you are volunteering you may find situations that challenge you as an individual. You may need to get out of your comfort zone to resolve issues. You will be growing, rather than shrivelling, as a human being.

The fourth autonomy is Recharging – physically and cognitively. You are taking responsibility for your physical and mental health, not leaving it to chance events.

Recharging helps you avoid mind rot, and body rot. Mental and physical exercise keep the body and mind alert, and eager for action. Interestingly, research shows that exercise is crucial not only to keep the body in shape, but also to help the body devote lots of resources to cognitive functions.

Cognitive recharging has several aspects (all supercharged by physical exercise).

Two of the most important are keeping the brain challenged and refreshed. In the first case by reading, thinking, discussion, crossword puzzles etc,. And in the second, regularly nourishing the soul – music, art, culture in all its forms.

The clincher, of course, is to develop a positive mental attitude. Positivity, and embracing change and challenges, supercharges everything. And you’re much more likely to have a positive mindset, once you have embraced the Four Autonomies. Especially as you’ll find yourself frequently engaged with like-minded people.

Looking at the picture overall, it is true to say that not having a job doesn’t have to mean you are out of work. With right mindset, the new, fragmented, and more prolific landscape for work provides exciting opportunities. Opportunities not just for income, but also for trying new things and finding work that stimulates you and turns you on.

It can open new opportunities, and close doors on jobs that are better forgotten.

Change is a great stimulus. By getting into shape through embracing Enlightened Thrift, and then taking control through the Four Autonomies, the future becomes a potentially uplifting and rewarding playground, full of meaning and fulfilment.