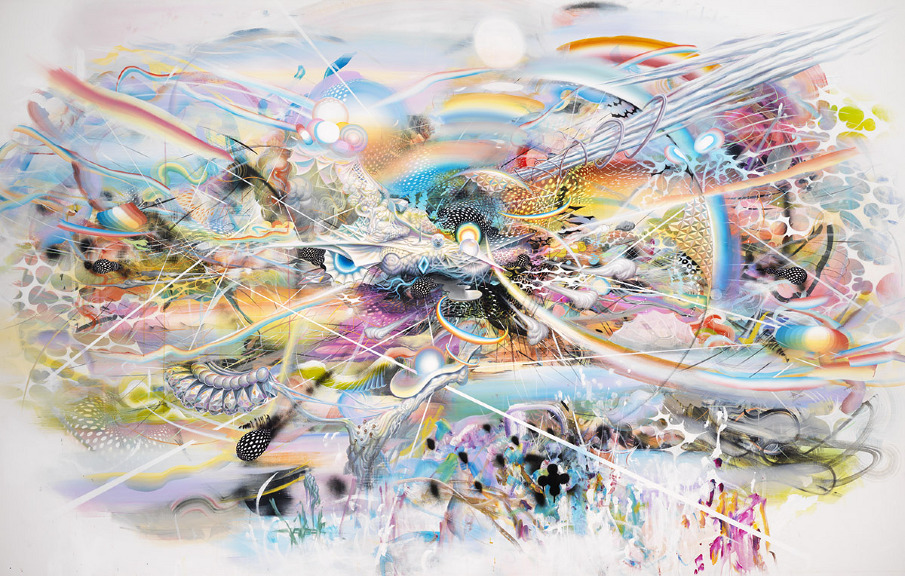 It's early on a Thursday evening, and I'm standing alongside a man I have just met, Will Williams, in his smart Shad Thames apartment. We are in front of a photograph of Guru Dev, one of the masters of the Vedic tradition, and Will has his eyes closed while singing something in Sanskrit and offering the gifts I was encouraged to bring - three pieces of fruit, a bunch of thornless flowers - to the guru. As he sings, I steel a glance at Will. His eyes are closed, and he looks utterly serene.

Will himself does not resemble what we in the west think of as a "guru". He is wearing a pale jumper and a brand of jeans I would like to own. He bears an uncanny resemblance to the 8 Out Of 10 Cats comedian Jon Richardson, and he later tells me he used to work in the music industry. He’s an entrepreneurial Vedic meditation master these days, with plans to make Vedic everybody's meditation of choice, running city courses and weekend retreats.

After several minutes of Sanskrit verse, he motions for me to follow him in kneeling. Then, so suddenly it takes me by surprise, he turns and sings something directly into my ear. Though I do not know it yet, this is to be my own personal mantra, which I will say repetitively in my mind for 20 minutes twice a day, every day.

The singing stops, and we repair to the sofa. "That was the only really ceremonial bit," he tells me. "Everything else is very normal, very ordinary. There’s nothing dogmatic, nothing doctrinal."

He requests that I close my eyes, and repeat my mantra aloud, two syllables that feel pleasant on the tongue. I do this for perhaps a minute, after which he tells me to say it quieter, then as a whisper, and eventually only in my head.

It has a close cousin in Transcendental Meditation, both requiring the repetition of personalised mantras

I do this for the full 20 minutes. It feels like a long time. When I open my eyes, I turn to see the man from 8 Out Of 10 Cats smiling back at me beatifically. "How was that?" he asks. I say that I feel as if I have woken from an unexpectedly deep sleep, and that I feel refreshed. The sunlight seems somehow brighter.

Vedic meditation has been around for thousands of years. It was repressed by the British in colonial times, but has since been revived over the last couple of decades and now boasts a global following. It has a close cousin in Transcendental Meditation, both requiring the repetition of personalised mantras, and two daily sessions of 20 minutes each. Any significant differences between the two, at least for the novice, are negligible.

The mantra is a set of phonemes, or vibrations, that allow the nervous system to relax, and encourage the brain to go into a state of coherence. Ordinarily, Will says, the brain is only 30-40% coherent at any one time; at other times, there is too much competing white noise. This is where the mantra comes in. The point at which one starts to repeat it, the brain begins to slow down and move into alpha state. Alpha state is good; it allows the constituent parts to move towards greater coherence. Disruptive frequencies can now settle, which balances the nervous system and all the other systems within the body that have been put out of alignment by the simple toil of daily life.

"And so on a physiological level," he says, "everything is now moving in the direction of going back to its default setting of optimal functionality."

A course in Vedic meditation takes place over four consecutive days. After my initial introduction, I return on Friday evening alongside seven other beginners, and then again early - arguably too early - on Saturday and Sunday morning, for some thorough exploration into the practice. Though he is the one dispensing the information, Will seems as freshly fascinated by its purported myriad benefits as we are, and he never fails to back up each subsequent claim with an awful lot of scientific corroboration.

He talks of the infinite reservoirs of energy, vitality, creativity and wisdom that runs through all of us, and how all we need to do to become our optimal selves is learn how to access it. Meditation, he suggests, promotes increased activity in the pre-frontal cortex of the brain, where we experience our high-level thinking. If we meditate regularly, then we enter further into the realms of pure consciousness.

It's a little like boarding an aeroplane and turning left, into first-class, when you are used to turning right, into cattle.

Will has experienced many higher states of consciousness through meditation. What's it like, I ask him.

He smiles widely. "Wow," is all he says.

We conclude each session with 20 minutes of meditation, and the room is silent save for the percussive rumblings of stomachs. As each ends, he brings us gently back into the here and now, and asks us what it was like, what we felt. He tells us not to expect too much too soon, but simply to be aware of any changes as they occur. If we manage to do this twice daily, he says, then over time the changes in our physical and emotional well-being will surprise us.

Two weeks on, and I'm still devoting 40 minutes each day to what I would once have considered unsettling silence, but now don't. In one sense, this is essentially the same as any other meditation, and yet it feels different, somehow. It's a little like boarding an aeroplane and turning left, into first-class, when you are used to turning right, into cattle. You are still headed toward the same ultimate destination, but the on-board experience feels heightened, more tactile, just somehow… more.

Will checks in regularly, and tells me to register the changes.

"And you will see a lot of changes," he promises.

I'm looking forward to them.