Culture Tip: To Rise Again at a Decent Hour
Find a therapist
Find a coach
Join as a practitioner
Log in/register 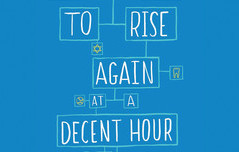 Culture Tip: To Rise Again at a Decent Hour

This week's Culture Tip is the first, and may possibly be the last, to incite in me an urgent need to increase dental flossing. Joshua Ferris's new novel To Rise Again at a Decent Hour follows anti-hero, Paul O'Rourke, who is a Red Sox fan, an avowed atheist and an acclaimed New York dentist with a thriving practice. He is a man who cares deeply about oral hygiene and his pain at his patients' dental deterioration is palpable.

Paul O'Rourke is also an insomniac, and whilst others might turn to their iPads or smart phones for distraction he despises the contemporary obsession with what he calls 'me machines' and spends his nights largely regretting failed relationships with women. It comes as an awful blow to O'Rourke to discover that someone has deliberately set out to impersonate him online as a website, Facebook page and Twitter account are created in his name. He is impotent in the face of a prolific alter ego who, it seems, might just be a kinder, nicer and far from agnostic him.

To Rise Again at a Decent Hour wrestles with weighty issues such as the true essence of self in a digital age and envy of religious belief and certitude whilst being funny, disarming and wise. Ferris's attention to the detail of ordinary life anchors the book when it is sometimes in danger of spiralling into dizzying fantasy. Moments where O'Rourke contemplates his ex-girlfriend applying hand cream or pulling her hair into a casual ponytail are written with as much intensity and beauty as a Rubens' portrait.

This is Ferris's third book and although not quite as compellingly as his first, Then We Came to the End, which was nominated for the National Book Award and won the PEN/Hemingway Award, it is just as original and a deeply rewarding read.