Brain Food: Eating for a Healthy Mind-Gut Relationship
Find a therapist
Find a coach
Join as a practitioner
Log in/register 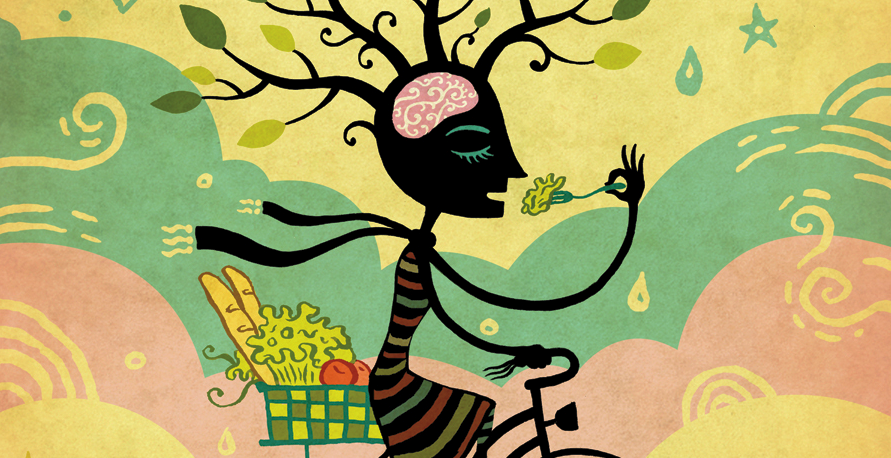 The thought that what we eat can influence the way our mind works is initially an alien one for many people. After all, the brain and its extension, the mind, are generally seen as uncharted territories, and we take for granted that they will work regardless of our actions. However, when I suggest to people that it's easy to prove we can influence our brain quickly, and ask them to think about how they feel after a cup of coffee, I see the light-bulb moment occur. 'Okay,' I can see them thinking, 'maybe there's something to this idea after all!'

Thinking occurs across a vast network of very sophisticated and well-orchestrated cells, chemicals, membranes and molecules. And just like our bodies, these components are influenced directly by what we do, with what we are eating and drinking being two of the largest contributors. The brain is the greediest organ we possess. Weighing in at only about 1.3 kg (2.8 lbs), which is about 2% of body weight, it uses 25% of the oxygen we breathe, 20% of the heart's output of blood, and up to 50% of our carbohydrate intake on a busy day. When it runs out of energy, we do too, and most people learn quickly that to get a quick energy boost a cup of coffee works a treat, as does a chocolate bar. But, as quickly as you feel that energy surge, the crash follows, and soon you are searching for another energy-hit, until this becomes your new normal with moodiness, depression and an inability to focus for a sustained period of time, accompanied by poor learning and memory capacity occurring regularly and of course weight gain, which follows naturally.

Even though it is very challenging to design and implement research that show an exact causative effect of diet on brain function (including mood, memory and learning) there are a number of studies that have looked at these relationships. The Mediterranean diet is already well-known for being heart-protective, but recent news has highlighted its relevance in terms of mood by finding that this diet, with its focus on fresh produce, whole grains, legumes, fish and fruit, is associated with a reduced risk of depression.

In analysing the diets of children and adolescents, a consistent trend was found between a good diet and good mental health, while exposure to a poor diet during pregnancy was associated with child behavioural challenges after birth in two studies. Both animal and human studies have revealed that brain structure is also influenced negatively by the intake of nutrient-poor foods.

Although we do not eat fats, carbohydrates and protein in isolation, but rather in combination in a variety of foods, these three food groups, along with vitamins and minerals, provide nourishment for our neurons, allowing them to work efficiently. Fats form a significant portion of the active intelligence of the cell, its membrane, while carbohydrates provide cellular energy, and protein provides the building blocks for the messages between neurons, called neurotransmitters.The vitamins and minerals that good food provides naturally, allow these three food groups to perform their functions optimally by acting as cofactors.

Let’s take serotonin as an example. Serotonin is a neurotransmitter that has a number of important functions, such as regulating appetite and mood, as well as being the foundation for the synthesis of melatonin, which enables sleep. The nutrients required to ensure serotonin synthesis are B vitamins, as well as zinc, iron, calcium, magnesium, vitamin C and amino acids (protein). If these nutrients are not available in the quantity required, serotonin synthesis cannot occur, and mood and appetite challenges can result.

Adrenaline requires many of the same nutrients, so if you are stressed a lot of the time, there won’t be enough nutrients to go around. In addition, the membrane that surrounds the neuron, axon and synapse, all parts of the approximately 100 billion brain cells, requires specific fats to enable optimal function. This leads to an unfortunate situation: the over-consumption of refined foods, along with a general lack of good fresh produce, means that the brain will be deprived of the very nutrients that it needs to have in abundance to be able to make many other neurotransmitters like serotonin, which affect focus, concentration and memory, leading to poor cognitive health. Unfortunately, most people do not see this link as being as direct as it is, and they therefore choose medication before looking at what they are eating every day.

The type of fat required to allow optimal brain function is not abundant in our diets anymore, as it goes rancid quickly and food manufacturers lose money when fats aren’t shelf-stable. So they use shelf-stable fats in processed foods, depriving us of the very fats our precious brains need. As our brains are 60% fat, this can lead to serious repercussions in brain health.

Digestion will impact both the quantity and the quality of the nutrients available for absorption, so the relationship between the brain and gut should be fairly obvious by now. Your brain won’t have access to the nutrients it requires if digestion and absorption are hampered by inadequate stomach acid, a lack of digestive enzymes and poor gut flora.

In conclusion, changing one's diet to influence brain function should be an enjoyable experience that can offer a myriad of other health benefits. To optimally nourish your neurons, explore new and exciting ways of eating more fresh produce, whole grains and legumes as well as nuts and seeds, and cut down - or better still, remove - all refined foods from your diet.