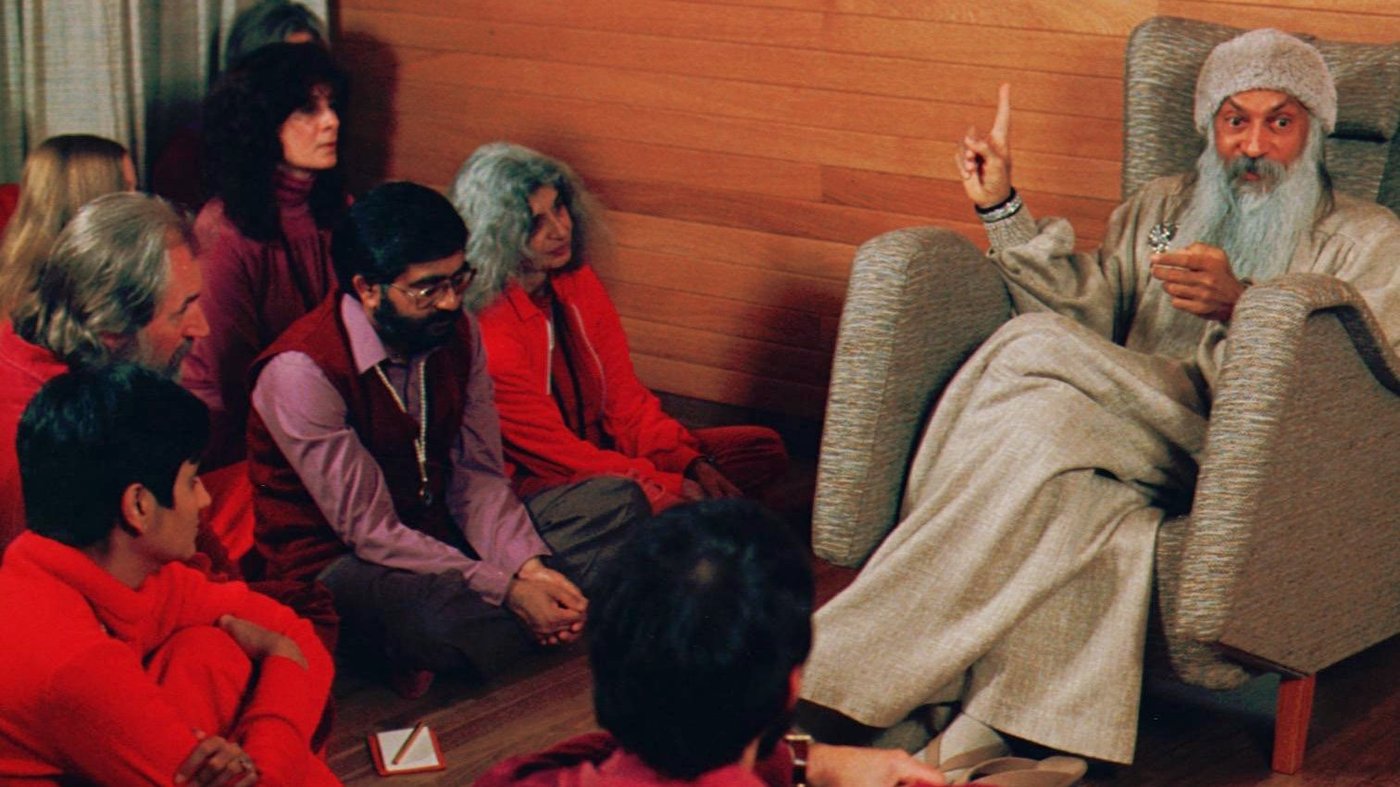 It has taken the binge-watching world by storm. Netflix’s hit documentary series about spiritual leader Bhagwan Shree Rajneesh and the commune his followers established in Oregon in the 1980s, is a crazy tale of crazy folks doing crazy things.

Over nearly seven hours Wild Wild Country shows how Bhagwan bought a huge ranch near the tiny town of Antelope, Oregon (population 40). He sent his followers ahead and, under the direction of his formidable right-hand-woman Ma Anand Sheela, they transformed the unprepossessing land into a large town with its own water supply and electricity station, an airport and a meditation centre for 10,000 people.

In re-locating to ‘the land of the free’ Bhagwan’s disciples found the locals downright unfriendly. What unfolds is a culture-clash between gun-toting Oregonians objecting to the influx of thousands of people prone to throwing off their red and orange clothes for al fresco sex and taking over their town to the extent of re-naming it Rajneeshpuram.

No one comes out well in this tale. After a Rajneeshee-owned hotel is bombed, the community arms itself with more weapons than the whole of the Oregon police put together. Then things get really wild, as the title suggests. When the Rajneeshees try to dominate local politics their strategy includes importing hundreds of homeless people for their votes, failed assassination plots and the biggest bio-terrorism attack in US history - poisoning local salad bars in an attempt to prevent locals voting. As a result, Sheela and two of her closest aides end up in jail and the Bhagwan flees the country.

Watching the series your sympathy flip-flops between the happy-looking ‘sannyasins’ who – to start with, at least – just seem to be having a good time and the miserable Oregonians who are – to start with, at least – put upon in ways that make you wonder how you’d feel if a cult moved in next door. And it wouldn’t be such a gripping watch (with a 100% approval rating on review site Rotten Tomatoes) if there wasn’t something universal about the story and lessons we can take from it in 2018.

Here are a few things it has to tell us about mental health.

The power of projection

If ever there were a demonstration that if you treat someone like a criminal eventually they’ll behave like one, this is it. The psychological mechanism of projection, where you allocate your own dark, maybe murderous, impulses to the ‘other’, makes it easy for each side to see themselves as ‘good’ and the other as ‘bad’. From the get-go the Oregonians label commune members as ‘dangerous’ and the Not-In-My-Back-Yard-ism quickly turns sinister with their slogan (referring to the disciples’ garb) ‘Better Dead Than Red’. There are many ways of seeing how the Rajneeshes respond, but they certainly act in ways that contradict their intention to create an ideal community. You could see it as the behavioural equivalent of fighting fire with fire - a kind of ‘You think we’re bad? You have no idea how bad we can be.’  As Carl Jung put it: "All projections provoke counter-projection’ Projecting bad onto others can become a self-fulfilling prophecy.

The dangers of idealisation

The blind dedication of the guru’s followers is positively jaw-dropping. There are countless scenes of ecstatic response to his mere presence. Hundreds of orange-clad devotees lining the route as he passes in one of his 93 Rolls Royces respond with the kind of adulation Donald Trump only imagines in his wildest dreams. And not just collectively but individually. Then and now the major players talk about him in glowing terms – his ex-lawyer Swami Prem Niren, for example, breaks down when describing seeing ‘this beautiful man’ in handcuffs.

To the average viewer Bhagwan appears a fairly ordinary human with a powerful gaze and unfeasible taste in hats but perhaps you literally had to be there. The  context is also important - in the Sixties and Seventies young people discovering Eastern spirituality genuinely thought they could change the world. The times were awash with gurus. The Beatles had the Maharishi. The Rajneeshees had the Bhagwan.

Sigmund Freud believed the psyche craves a strong leader; that life is difficult, making decisions is painful and we’re all capable of following someone who  offers certainty and takes that awkward process away from us.

Those who study cults say people from difficult family backgrounds are especially vulnerable to guru-worship. As psychoanalyst Daniel Shaw, an ex-cult member himself (though not a Rajneeshee), says "For many if not most of the people who become involved in this kind of group the cult leader was like an idealised parental figure and the group an idealised family."

But whenever we idealise another person (in any relationship, not just guru/follower), and especially if we let them tell us what to do with our lives, we leave ourselves vulnerable to unhappiness. For a start, they’re bound to fall off their pedestal eventually, and that will be painful. Plus there’s always a price to pay for giving up on our own desires, needs, feelings.  If you’ve invested years in a one-up-one-down relationship, the ensuing grief and regret can be enormous.

Wild Wild Country ‘s ex-sannyasin Jane Stork is an extreme case of how idealisation could turn a young Australian woman brought up to understand the commandment ‘Thou Shalt Not Kill’ into someone capable of attempted murder. She admits hero-worship of both Bhagwan and Sheela and describes the journey back from self-delusion as ‘breaking the spell’.

Perhaps Bhagwan Shree Rajneesh was a genuinely spiritual being whose very presence brought good to the world. But it’s certainly the case his followers ended up breaking the law and it’s not obvious from the series just how much he knew about what was going on.

Plus his commune demonstrates classic features of a cult. Shaw defines the term as "describing a group with a charismatic leader or leaders …with followers who fanatically embrace an ideology dictated by the leader which involves rituals of self-purification and a mission to eliminate impurities in the world; and in which followers adopt ritualized, idiosyncratic modes of speech, dress and behaviours that are typical of the group as a whole." The Rajneeshees tick those boxes. Shaw argues all cult leaders are "traumatising narcissists" – grandiose, over-inflated people who "seek hegemony for their subjectivity by weakening and suppressing the subjectivity of others".

Not just Bhagwan but Sheela display classic characteristics of textbook narcissism including an overarching belief in their own rightness (Shaw’s "subjectivity") and an ego hungry for attention, praise, worship which turns on anyone who’s not providing it. The minute Sheela and her coterie of core followers quit the commune Bhagwan breaks his four-year silence to denounce them on TV as ‘a bunch of fascists’.

Narcissists also manipulate to get their own way. We see that when Sheela’s husband is dying, Bhagwan tells her to smile, only smile, sedates her for three days afterwards, then tells her ‘that chapter’s over, now bury yourself in work’. It’s not what most grief counsellors would advise.

Narcissistic personalities tend to see things in in purely black and white terms – someone is all good or all bad with no grey areas between, things are either perfect or terrible. Whenever humans are under stress or experiencing emotional pain, we all can regress to seeing the world in these simplistic extremes - what the theorist Melanie Klein called "the paranoid-schizoid" position. Wild Wild Country is awash in paranoid and schizoid behaviour.

And does it lead to a happy ending? History shows us over and over where that world view leads. If there’s a moral to be drawn from Wild Wild Country it’s that being convinced of your own rightness and everyone else’s wrongness only leads to pain. After all the Oregonians didn’t deserve to be poisoned and attacked. And not everything the Bhagwan said was wrong – his books and retreats are still popular today 28 years after his death. After all, research into the present-day practice of mindfulness says meditation has positive effects on wellbeing. You don’t have to join a cult and wear orange to benefit.