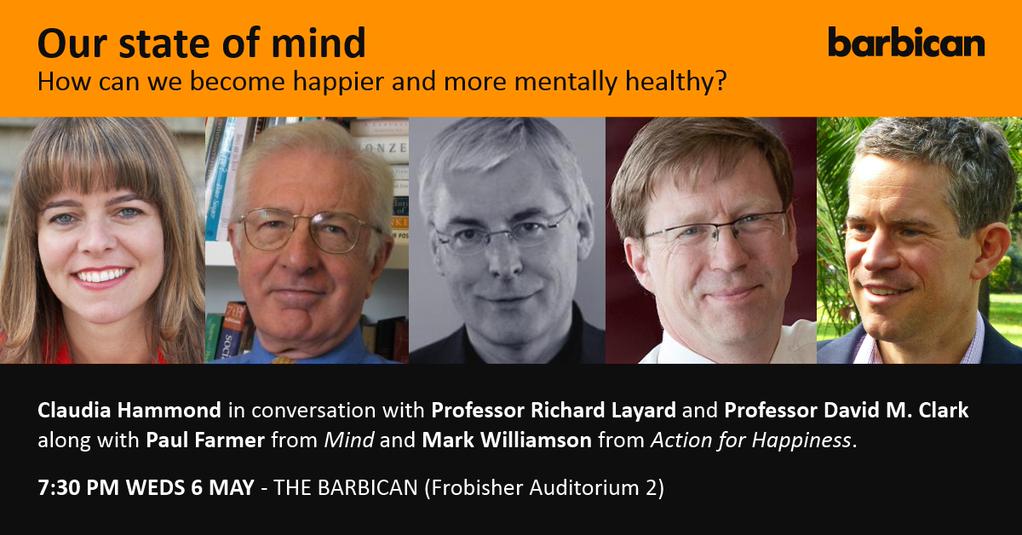 Valuing our State of Mind

Is society really starting to be more honest and open about mental health?

Every political party has for the first time mentioned mental health in their manifestoes; celebrities such as Ruby Wax and Stephen Fry have overcome stigma to open up and talk about their own problems with mental illness; the public is starting to follow suit. Is this, asked BBC All in the Mind presenter Claudia Hammond, at a sell-out Barbican and Canongate Books event called Our State of Mind, a sea change in our attitude to mental health?

“More of a sea trickle,” said Paul Farmer, CEO of Mind, the mental health charity. “It’s a quiet revolution, but we can definitely see that public attitudes are changing”.

According to economist Richard Layard, this is not nearly quickly enough. Listing the huge effect mental health has on society - from the fact it accounts for 50% of all illness for under 60s to the current situation in which only one-quarter of the people with depression are being treated - he thinks the public should be up in arms over the lack of provision. “We need a clamour from the public until we see parity of treatment for physical and mental health. It’s a scandal”.

But preventing people from sliding into mental ill health is the first step, said Mark Williamson, director of Action for Happiness. “We need to create a society that reduces the chances of people falling off that cliff. We all have mental health, and there are so many things we can do to protect it, like mindfulness, connecting with others, looking after our bodies”.

If we see someone looking unhappy we need to say Are you OK? We hope they will say Yes, but we have to be prepared to have a difficult conversation if they’re not

To help others we also need to overcome our reluctance to get involved, said Mind’s Paul Farmer. “If we see someone looking unhappy we need to say Are you OK? We want, hope and pray they will say Yes, I’m fine, but we have to be prepared to have a difficult conversation if they’re not. It’s actually a small change, but it can have a huge effect”.

Both Layard and Williamson also expressed concern over the rise of anxiety and depression among young people. Said Layard, “There is too much pressure with exams and constant comparisons with each other. We have to start to change that culture so that young people understand that whipping up competitive urges is just not a sensible thing to do.”

When Hammond asked them their hopes for the future, they included family focus on wellbeing (Williamson), spreading the focus on outcomes across more of the IAPT programme (Clarke) and 10% increase in resources for mental healthcare (Farmer).

Our reluctance to address the issue of mental illness is clearly shifting. As Paul Farmer pointed out, only 50 years ago we didn’t used to talk about cancer - the word itself was forbidden or whispered. We’ve come a long way on that road - now it’s time to deal with our fear and reluctance to talk about, and deal humanely and effectively, with mental health in our society.

To find the right therapist or counsellor to help with your problems, try our directory