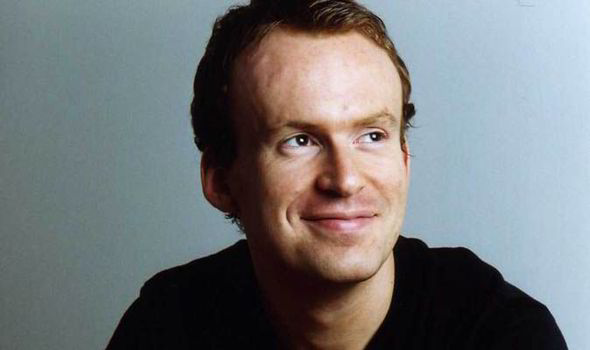 Matt Haig on His First Signs of Depression

I never saw the double-whammy of anxiety and depression coming before it knocked me out when I was twenty- four. But I should have done. The warning signs were all there. The moments of despair as a teenager. The continual worrying about everything. In particular, I believe there were also a lot warning signs while I was a student at Hull University. The trouble with warning signs, though, is that we only have the past to go on, not the future, and if something hasn’t actually happened it is hard to know that it will.

The advantage of having had depression is that you know what to look for, and there was plenty to spot while I was at uni, but I never noticed it.

I used to stare into space, while sitting on the fifth floor of the university library, imagining, with a kind of bleak terror, mushroom clouds on the horizon. I used to feel slightly strange sometimes. Blurred around the edges, as if I was a walking watercolour. And I did need to drink a lot of alcohol, now I think about it.

I also had what was a panic attack, though not on the scale of the later ones. Here is what happened.

As part of my joint English–History degree I took a module on Art History. Though I didn’t realise it at the time, that meant that at some point in the term I would have to do a presentation on a modern art movement (I chose Cubism).

It sounds like nothing, but I was dreading it as much as you could dread anything. I had always been scared of performing and public speaking. But this was something else. I simply could not come to terms with the idea that I would have to stand in front of an entire seminar room full of – ooh – twelve, maybe thirteen people, and talk to them for twenty minutes. People who would be actively thinking about me and concentrating on me and listening to the words coming out of my mouth.

‘Everyone gets nervous,’ my mum told me, on the phone. ‘It’s nothing. And the closer you get to it, the closer it is to being over.’

But what did she know?

I mean, what if I got a nosebleed? What if I couldn’t speak at all? What if I pissed myself? There were other doubts too. How do you say Picabia? Should I use a French accent for the name of Georges Braque’s painting Nature morte ?

For about five weeks I couldn’t really enjoy anything because this was coming up, and I couldn’t do a no-show because it was assessed, as part of course work. The thing that I was particularly worried about was the fact that I had to co-ordinate reading my words with the presenting of slides. What if I put the slides in upside down? What if I spoke about Juan Gris’ Portrait of Picasso while actually showing a Picasso? There were a seemingly infinite number of nightmare possibilities.

The day came. Tuesday, 17 March 1997. It looked like so many other drab Hull days. But it wasn’t. Looks were deceptive. There was threat in the air. Everything – even the furniture in our student house – looked like secret weapons in an invisible war against me. Reading Dracula for my Gothic Literature module wasn’t helping either. (‘I am all in a sea of wonders. I doubt; I fear; I think strange things, which I dare not confess to my own soul.’) ‘You could always pretend to be ill,’ my new girlfriendand future wife Andrea said.

And then I went to the chemist and bought a pack of Natracalm and swallowed as many of the twenty-four tablets as I could manage. (I think about sixteen. Two sheets’ worth. They tasted of grass and chalk.) I waited to feel the calm that was promised.

But it didn’t happen. Itching happened. And then a rash happened.

The rash was all over my neck and hands. Angry red blotches. My skin felt not only immensely itchy but also hot. The seminar wasn’t until quarter past two. Maybe the rash was a stress response. Maybe I needed something else to calm me down. I went to the union bar and had a pint of lager and two vodka and limes. I had a cigarette. With ten minutes to go before the presentation was due to begin I was in the toilets in the History Department, staring at a swastika some idiot had biro’d onto the shining blonde wood of the door.

My neck was getting worse. I stayed in the toilets. Silently briefing myself in the mirror.

‘Stop,’ I whispered. But time doesn’t stop. Not even when you ask it nicely.

Then I did it. I did the presentation. I stuttered and sounded frail as an autumn leaf in my head and messed up the slides a couple of times and failed to say anything at all that I didn’t have written down in front of me in my best handwriting. People didn’t giggle at my rash. They just looked deeply, deeply uncomfortable.

But halfway through I became detached from myself. I derealised. The string that holds on to that feeling of selfhood, the feeling of being me, was cut, and it floated away like a helium balloon. I suppose it was your standard out-of-body experience. I was there, not exactly above myself, but above and beside and everywhere all at once, watching and hearing myself in a state of such heightened self-consciousness I’d actually burst right out of myself altogether.

It was, I suppose, a panic attack. My first actual proper one, though nowhere near the scale of those I’d know later in Ibiza, or back living at home with my parents. It should have been a warning sign, but it wasn’t, because I had been panicking for a reason. Okay, so it wasn’t much of one, but in my head it was. And if you are having a panic attack for a reason – a lion is chasing you, the lift door won’t open, you don’t know how to pronounce ‘chiaro- scuro’ – then it is not really a panic attack, but a logical response to a fearful situation.

But it is always hard for us to see the future inside the present, even when it is right there in front of us.