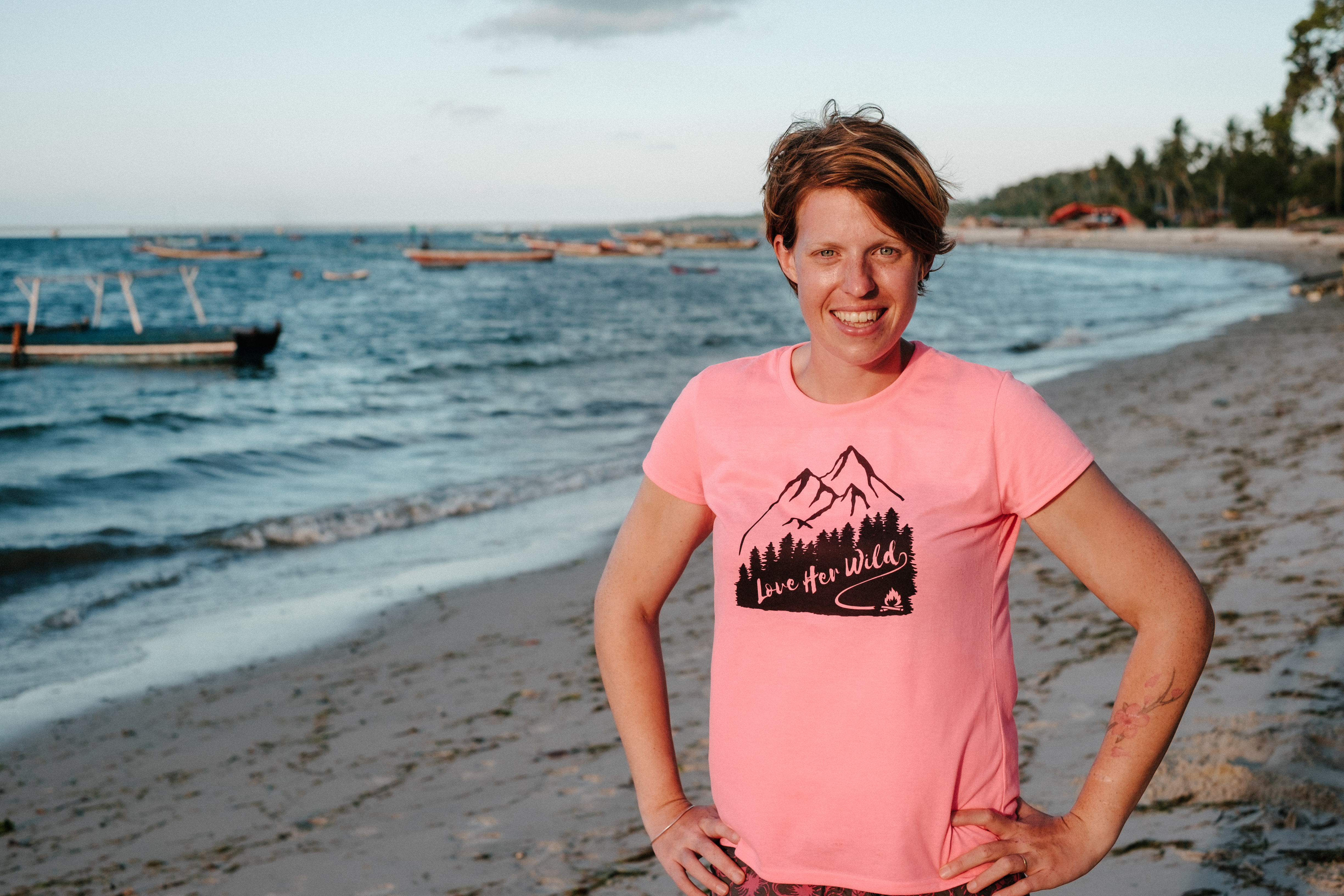 My Mission to Get More Women Outdoors and On Adventures

The 400 metre climb loomed above me. I was exhausted but I had no choice. There was nowhere for me to camp near where I was. I paused, taking a sip from my water bottle, which did little to soothe my cracked lips and thirst, and took stock of my body. My legs were shaking slightly after a day of tough walking, the soles of my feet throbbing. My skin tingled slightly, pink from a day exposed to a blaring sun. The worst though was the pain in my back from carrying the heavy rucksack and the sore spots where the straps rubbed. I was sore, tired but also felt alive and totally present.

A breeze picked up, soothing away some of the stored heat in my body. I knew the cold would set in soon. The desert yo-yoed from impossibly hot in the day to impossibly cold at night.

The last of the sun disappeared below the horizon. I would have to start moving if I was going to make it before losing the last of the light. I took a step and then another. The climb always felt steeper than it looked. After just a few minutes my heart began racing, the sweat prickling from my pores, my muscles burning with the effort.

Doubt started to creep into my head – I'm not going to make it, this is too difficult, I'm going to fall. And then self-loathing – you should have trained more, you were stupid to think you could do this hike, you are so weak. I consciously shut the negativity down before getting swept away in its wave. Instead, I focused on the positives. How far I'd travelled to this point – hundreds of kilometres. The fact that soon the day of hiking would be over and I could crawl into my tent and welcome a satisfying well-deserved sleep. And that I'd been brave enough to even do this in the first place, committing to doing the 1000km Israel National Trail despite all the fear I'd felt.

One foot in front of the other, I pounded the rocky path, driving myself upwards. Until, at last, the ground flattened out underfoot. I'd made it. I always did, even when I thought I'd reached my end, that this last climb was one too many. I smiled to myself – proud, content and enjoying the uplifting feelings of endorphins racing through my body.

It had all been worth it.

Hiking the length of Israel was the first big adventure I ever did. It took 52 days to complete. The trail passed over mountains, followed the Mediterranean coastline, scooted past Tel Aviv and Jerusalem before heading south, weaving through the vast and dangerous Negev desert.

It was hard to explain to others why I had decided to do the hike. I was unfit, inexperienced and had never done anything like it before. But at the time I was also unhappy, dissatisfied with work and worn down after years feeling stuck and living a life I didn't want to lead. I was drawn to the trail. To the idea of the change I knew it would bring. To the adventure of it all.

The experience didn't disappoint. By the end of the hike, running fully clothed into the Red Sea in Eilat in the south of Israel, I felt like a different person. I was more sure of myself, I had restored my lost confidence and, for the first time, finally had an idea for what I wanted to do with my life....

Setting up Love Her Wild

While preparing for the trail I joined some outdoor courses to learn the basics about hiking, wild camping and outdoor first aid. It didn't take me long to notice the massive imbalance in the outdoors – I was often the only female. It was the same on the trail, where I didn't meet a single woman doing the full distance.

This seemed like such a shame to me. I'd taken so much from going on an adventure; perhaps even more so because I'm female where there are so many additional societal expectations to look and act a certain way. I wanted more women to get outdoors, to build back confidence, in the way I had, and to experience the great change that comes when you take on a non-motorised outdoor challenge.

So I launched Love Her Wild. It started as a small Facebook group but has now grown into a bustling social enterprise and the UK's largest women's adventure community, taken thousands on life-changing adventures all over the world.

What's so special about adventures

Adventures tear you away from your life and put you in an entirely different world where you are stripped back to basics. Gone are the social media updates, the to-do lists and the pressures from others. You don't need to worry about what you are wearing (on most adventures you wear the same outfit for multiple days), there are no expectations and, for a short period of time, your only worry is covering distance each day.

I consider myself very lucky to now be at the helm of a community inspiring others to take on their own adventures. Often, it's the first step that is the hardest, which is why singing up to join a supportive team can make it that little bit easier.

After years of going on adventures and also leading others on expeditions, I've witnessed that most people's concerns are the same. We all feel we are not fit enough. Worry that we aren't experienced enough. And nervous about how we will cope putting ourselves in such a tough environment. But the outcomes are reassuring. Usually you are fitter and more resilient than you think you are and the fitness and most of what you need to learn can be picked up along the way.

Following the tough times we've all had with the pandemic, there has never been a better time to make this the year you go on an adventure.

Stretch those legs, get outdoors and, maybe just like me, you'll discover you are capable of much more than you think you are!

Bex Band is the author of Three Stripes South which tells the story of her life-changing trek on the Israel National Trail, and which went on to inspire a women’s adventure movement.

How to connect with the nature around you

Engaging your senses in nature: the value of touch

Therapeutic landscapes: how the natural world can boost wellbeing