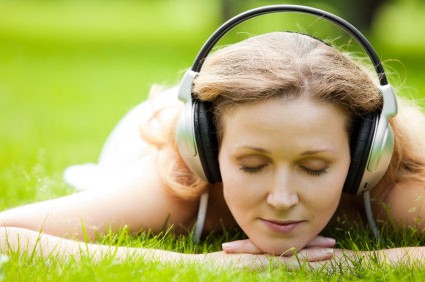 A few months ago now, I came across an audio meditation practice called LifeFlow, the conjoining of the two words presumably designed to illustrate the effortless link that should exist within all of us in the ideal world we all wish to inhabit.

"You can allow this scientifically proven audio technology to bring your whole life into perfect harmony and feel peace of mind today!" read the aggressively motivational website blurb, employing, as these things invariably do, a proliferation of exclamation marks in pursuit of blanket persuasion. "YES!" it went on in screechy capitals, "please give me instant access to this breakthrough technology."

Now, in the reading of such bold claims, I found it difficult not to arch a very English eyebrow, not least when LifeFlow, as far as I could make out, was essentially meditation music, a little plink plink fizz to calm the overactive mind. But then what did I know? It offered a free sample, eight minutes of it, during which time, the website promised, "you will quiver with pleasure as endless happy endorphins and anti-ageing hormones flow through your mind and body. You will gasp in amazement as you actually feel your creative juices beginning to flow and mental blockages begin clearing for innovative new ideas to break through the surface from your hidden subconscious genius within."

I'd not previously considered my subconscious genius within, chiefly because I was unaware I had one. Anyway, the first downloadable CD, which comprised 40 minutes of meditation soundtrack, retailed at $67. But this, I learned, was merely an introductory soundtrack. There was more, much more. The complete 10 CD box set retailed at $977, but was currently on offer at $777, complete with a one-year moneyback guarantee. By signing up to this, I would also qualify for further CDs on Optimal Learning, Creative Flow and Discover Meditation as FREE GIFTS (their capitals), which, it was suggested, had a retail value of $331.

Despite my by now deep suspicion, I nevertheless listened to the free "8 Minute Wonder" sample and, to my surprise, liked it a lot, a babbling brook busy with sonic incident: rapidly running water alongside chirping crickets and windchime effects, each overlaid on top of the other. For those used to guided meditations – which, by their very nature, are inescapably repetitive - or else silent - which, halfway through, can seem punishingly silent - this was different. Listened to through earphones, the sounds bouncing from one bud to the other and pouring into the brain like lava, I really did feel like I was being transported into another world, one more vivid, brighter, alive.

An online currency converter informed me that $67 was approximately £45. I procrastinated for a few days, and for the time being simply re-listened to the "8 Minute Wonder" sample. But LifeFlow, it seems, does not like the procrastinator. E-mails started arriving.

"How about that LifeFlow demo track?" went the first one. "Awesome, isn't it?" Then, in bold print: "How soothed and relaxed did it make you feel? Most people who try this demo can't believe how calm and de-stressed a simple audio track can make them feel. If you have not listened to it yet, you absolutely must. Why? Because it will be the highlight of your day. You'll love the way you feel when you listen to this breakthrough audio technology (because you're getting far more benefits than your ears can perceive)."

It went on like this at length, before concluding that this free taster was merely half strength; to get the 'Industrial Strength', you'd need to pay. "It will blow you away," came the promise. "[And] if you get started today, I'm willing to give you a special deal right now…"

It was signed, in an inky scrawl, "Michael". This was Michael Mackenzie, a Scottish-born but, since 1984, US-residing man behind an outfit called Project Meditation. Michael Mackenzie, I sensed, would have made a highly effective car salesman.

The e-mails continued, day after day after day. "I may not know you personally," one began, "but there's something I do know about you… If you're like most people who seek inner peace, less stress, or to escape anxiety… you know you SHOULD meditate."

Another email discussed "brainwave entertainment, where you cause your brainwave frequencies to align with the frequencies of specific brain states." Another cited the positive testimonials of several registered doctors. Another still, in bold again, asked whether I ever feel like I'm alone, "with no one you can REALLY talk to?… about what's on your mind or how to untangle yourself from life's inevitable stresses and snags?"

I was by now beginning to flinch at Michael Mackenzie's over-use of capital letters and elipses, and his daily assaults on my Inbox, his persistence, his browbeating. Of course, he was only being American, and Americans (even Scottish ones) excel at rabid enthusiasm, as anyone who has seen a US TV infomercial will attest: how else to reach your audience in a crowded market than by badgering them into submission?

Englishly, I did not take to being badgered into submission, and so, though tempted by the offer of the moneyback guarantee, I declined to take him up on his offer. LifeFlow makes all the claims other meditation approaches make, and so despite Mackenzie's salesman tactics, there is the scientific evidence to back up his claims. I just didn't appreciate his carping.

That said, I did end up getting the first CD, 40 minutes of contradictory calming busyness and rainforest hyperactivity. I love it. It sends me to sleep most nights. And if I have yet to wake up the morning after any more consciously attuned to my inner genius - well, I live in hope. There's always tomorrow. Genius takes time.