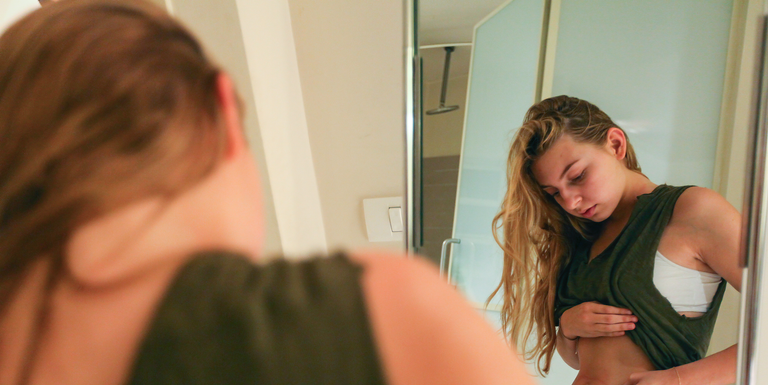 How to Spot if a Child is Vulnerable to Body Dysmorphia

Our body image is how we see ourselves and what we think about our bodies. Having a positive body image is very good for mental health, because when we feel good about ourselves, we feel happier, more positive, and more confident.

When we don’t like what we see in the mirror, or when we feel something isn’t right about our bodies, we have a negative body image. This can have a big impact on our confidence and make social interactions difficult because of an increased level of self-consciousness.

Negative body image can be life damaging and can affect anyone; some people resort to extreme dieting in order to lose weight. Crash dieting can be attractive as it promises quick results, but it can be very unhealthy and unsafe. In some cases, people who suffer with a distorted self-body image go on to develop eating disorders such as anorexia nervosa and bulimia nervosa.

Is your child vulnerable?

Teenagers are very susceptible to body image issues. Does your teen show any of these signs?

·         They become self-conscious about their body, perhaps because of the physical changes associated with puberty

·         They worry about fitting in with their friends and peers, which can affect the way they view their bodies

·         They may also be influenced by ideas in the media about what they’re supposed to look like, causing concerns about following this stereotypical idea of beauty and weight. This can impact their confidence and self-esteem in a negative way, as these social norms suggest that teenagers can only be happy and successful if they conform to what others deem attractive and trendy.

A distorted body image can also lead to the development of Body Dysmorphic Disorder. This is a form of anxiety where a person feels worry and fear that they’re ugly, or that a specific part of their body is abnormal or strange-looking, even though other people see them as normal and try to reassure them.

For example, a person who suffers with body dysmorphic disorder might think they have a very large nose which looks abnormal and that other people are staring at it when they’re out in public. They may constantly look at their nose in the mirror. They may often think about covering up their nose or about getting surgery to ‘fix’ it.

But these feelings about their nose and the intrusive thoughts they have about it are part of their mental health condition – their body image has become so distorted they aren’t able to see themselves as they really are. In reality, to other people the nose is ordinary.

It’s important to remember that people with body dysmorphic disorder aren’t vain or self-obsessed because they’re continually thinking about the way they look. They find it very upsetting but they’re unable to stop the thoughts from happening and may be afraid to talk about their feelings.

A person with body dysmorphic disorder may have these symptoms:

1.       Checking how they look, by looking in a mirror or asking for an opinion

2.       Asking for reassurance from friends and family about their appearance

3.       Avoiding mirrors as they’re afraid of seeing themselves

4.       Constantly re-doing make-up or hair as they don’t feel they look right

6.       Avoiding social gatherings that might require them to show their body or the part of their body that they’re ashamed of

7.       Wanting surgery to ‘fix’ themselves even though it isn’t required.

Body dysmorphic disorder can be addressed with medication and therapy, so it’s important to get professional help. Reassure your teen that it is a treatable condition and it is not something to feel embarrassed about.