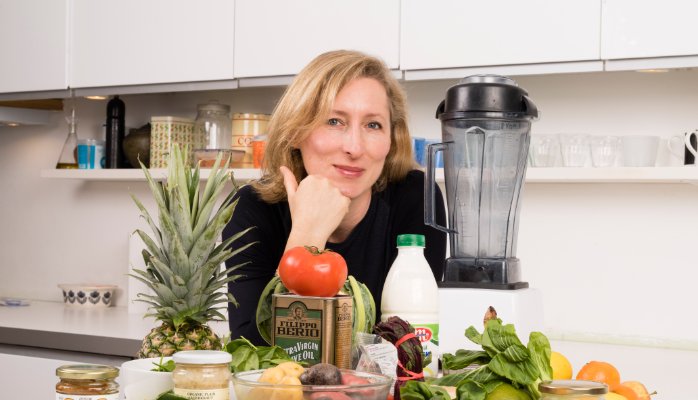 How I Gave My Gut a Makeover

Everyone is talking about the microbiome these days. According to cutting edge science, your overall health is largely reliant on the makeup of your gut flora, a veritable swamp of bacteria. The digestive system is being dubbed “the second brain”, meaning an unhealthy gut is implicated in mental health too. And the best way to keep your gut it in top condition is with your diet.

It was for this reason that I – a committed omnivore — went on a four-week regime devised by nutritional therapist Jeannette Hyde (pictured above) to “nourish your gut, revolutionise your health and lose weight”. Out were going caffeine, dairy, grains, alcohol, processed food, refined sugar; in were coming 20-30 different types of fruit and vegetables each week, plus protein at every meal. Hyde claimed that initial research of this regime’s effect on mood symptoms were “dramatic”. I wanted to see what it could do for me.

For the first three days I suffered the worst headache of my life. My seemingly moderate coffee consumption (two cups of Lavazza a day) did not protect me from full-force caffeine withdrawal. My eyelids were at halfmast, my concentration impaired – it was hell.

But on day 4 everything changed — I was filled with effervescent energy. I started to enjoy the daily routine: fruit, 2 eggs scrambled, herb tea for breakfast; big salad with either cold chicken, sardines or tuna for lunch; stir fried veg with chicken, lamb or fish for dinner.

Apart from the wine and coffee, it’s the missing carbohydrates that mark this regime out as different to my usual intake –morning muesli, lunchtime sourdough, evening rice, lentils, pasta or potatoes. You’d think I’d be weakened by that but I win my regular Friday morning tennis game easily. Sadly though, it's during that tennis match that I do something to my back so that for the rest of the four weeks I am unable to do any exercise and have to see a physiotherapist.

There is no doubt that finding 20 different types of fruit and veg a week is a project in itself. In the first week I was conservative in the fruit department: blueberries, strawberries, raspberries, apples, while the veg was more adventurous, ranging from asparagus to watercress, by way of orange peppers and bean sprouts, mint and sweet potatoes. Variety is an important element in building up the gut flora.

One day I was invited to see Dr Isaac Mathai, from Soukya Holistic Centre in Bangalore. described by Deepak Chopra, as ‘one of the most competent and brilliant holistic doctors in our world today’. While he has plenty to say about my back (and the role stress was playing in it), when I told him about my gut makeover he nodded quietly. I got the feeling that my consultation was shortened by the fact he couldn’t lecture me on my killer Western diet.

The following day I saw my GP, supposedly to discuss my stiff fingers. But they were no longer bothering me, ditto my bloated belly and accompanying wind. Pleasingly my new GP was open to the idea the the gut makeover was having an effect but pointed out that the medical jury’s out on exactly what might have caused the problem in the first place.

The first two weeks are the shock tactic of the makeover. In the second fortnight, you are allowed to add in a little dairy as part of the all-important probiotics. These are foods containing live bacteria. So I tried my first smoothie: banana, berries, milled flaxseeds and kefir (fermented milk, from the health food shop). It’s bearable, but I’d rather eat my food than slurp it through a straw. I also crumbled a little Roquefort into a salad, or munched on a daily gherkin, again for its bacterial boost.

Be reassured: I wasn’t “doing an Ella” or any of the other “clean eating” stuff. The gut makeover is a corrective to over-indulgence or simply not getting the right balance in your overall diet. So the end result is a healthy microbiome and all that brings with it, including psychological wellbeing. Hyde reports that initial findings from the psychology department of St Marys University Twickenham’s research into gut and mood symptoms for those using the Gut Makover diet were dramatic: “ If these were the results of a drug it would be front-page news” said lead researcher Dr Kate Lawrence.

By this point I could see a number of psychological/emotional improvements: I slept better; my brain was perky through the day when it would often have been flagging by 3pm; even my patience was improved. I'd also lost 3kg without ever feeling like I was "on a diet".

And, though I wouldn’t have planned it, I believe the gut makeover made my lower back pain easier to tolerate. Feeling incapacitated by a physical problem is depressing, yet I dealt relatively sanguinely with my discomfort.

I was completely in the swing of things by now, and anyway I had decided to keep going past the four week mark. And for someone who was a committed sourdough-and-museli-eater, that’s impressive.

The takeaway from the regime is fairly simple:

All good sane advice for healthy eating, with a heavy dash of psychological wellbeing thrown in.