Can I be Friends with My Ex-Therapist?
Find a therapist
Find a coach
Join as a practitioner
Log in/register 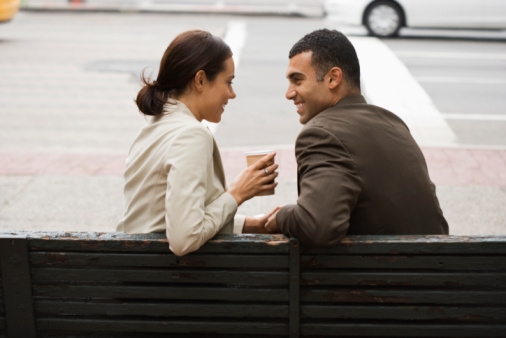 Can I be Friends with My Ex-Therapist?

I saw the faultlines emerge unexpectedly a long way off and the smoking mountain rising on the horizon. I held the map of awareness and knowledge, but I was intrigued. I decided to go with the danger.

I could handle having a real-life working relationship with my ex-therapist – or so I told myself when Josh suddenly called my office to talk about a referral and suggested a catch-up. It was more than three years after therapy had ended. My stomach flipped, my voice wavered but I kept it together. Just.

I immediately formed high hopes of friendship, of professional and personal sharing, where I could revel in feeling special and connected to him again. I came alive on a whole new level just from hearing his voice, just from knowing he had thought of me and trusted me as a colleague, as an equal. It felt like a pretty amazing endorsement.

Fast forward a couple of months and there was Josh sitting opposite me in a local cafe. He talked to me about his three kids, about his passion for sailing, selling his house, his recent volunteer work as a medical consultant overseas. I listened and ate it all up. It was weird, almost surreal, to talk like friends after years of knowing nothing about his private life. I felt special, trusted, chosen – many of the things I’d yearned to feel with him.

I talked about my child, my work and my world and I enjoyed the bliss of his complete attention, like old times only better, and with food. He said that he wanted to catch up again soon and that it had been great to talk like this. We hugged and I felt momentarily magnetised and thrilled by his warmth. I went to work on a cloud of happiness.

Josh telephoned again, as he said he would, a couple of weeks later. Again we met for coffee and a great chat. It started to become a regular thing – business over coffee every couple of weeks. It was so much fun and I was so proud to enjoy colleague status with Josh. We laughed a lot, confided in each other and became increasingly involved with each other’s worlds. Of course I was attracted to Josh but I’d pushed these feelings aside for over a decade. I wasn’t going to let them get in the way of a great friendship and real-world connection that I had yearned for with him for so long.

Then one morning after the second cup, Josh announced that he thought it was ‘safer’ if we didn’t meet again. His words were considered and intense. I was surprised and I felt a little panicky that I might be losing him again so soon after reconnecting and imagining that an enduring friendship was underway.

Josh said that his feelings for me were ‘dangerous’ (what!?), that our meetings had an affair-like quality and we had probably better stop seeing each other. I was stunned into silence, completely gobsmacked, my mind reeling. Everything started to feel a bit blurry, like a TV flashback when the image ripples as the clock is turned back.

Had he been attracted to me all this time? Me, the one who had grown up swimming against a tide of unworthiness, me about whom he knew everything? I had gotten his attention in this way despite him knowing my every shame and witnessing years of my struggles? I was speechless.

I said that I had to go. This kind of attention from Josh had been my fantasy, but real-world feelings were another thing entirely. ‘Dangerous’ was an understatement. He was my doctor, my mentor, my father-figure? Holy. Shit.

I was mind-blown and confused. I needed to get my thoughts in order over this revelation. Perhaps Josh had expected me to argue against his words but I could barely speak, so no sooner had he said it than he changed his mind. He paid the bill and returned to the table, simply saying that it was my turn to pay for coffee next time. Next time.

Outside the cafe it had begun to rain. I was mainly aware of feeling afraid but there was a whole storm of emotions beginning to swirl in my gut. I began to say a hasty goodbye but Josh put his hand out to stop me as I went to walk away.

He softly brushed his hands over my shoulders and down my arms to embrace me, looking into my face with such tenderness. I closed my eyes, right there in the street in broad daylight, and fell into a new, terrifying reality. Confidently, he slid his hands down the sides of my waist and over my hips.

So suddenly it was sexual. Just like that, he crossed the line. The ‘father love’ immediately went bad, for real. I panicked and took deep breaths as I realised he couldn’t be my father-figure anymore. He wasn’t my therapist anymore either. In that single tiny moment, on so many levels, so much was irretrievably turned to ashes and scattered to the wind.

Terror of looming loss, confusion about his role in my life combined with unwanted, primal arousal was a nasty, dirty cocktail. He almost held me up while I more than trembled, I really shook. He must have felt it, but he showed no concern. I thought he should have been concerned; but no, everything was different. He just looked into my face and smiled.

I jerked away, saying something about the rain and took off up the street running, running in my high-heel boots as if my life depended on it. He was calling out to me and I think he was following me up the street, but I didn’t look back. I cried, then I laughed in disbelief, but I didn’t look back. Meanwhile, some primal, wild woman part of me I barely recognised was doing all she could to commandeer my ship. She sweated to pursue Josh with her every fibre.