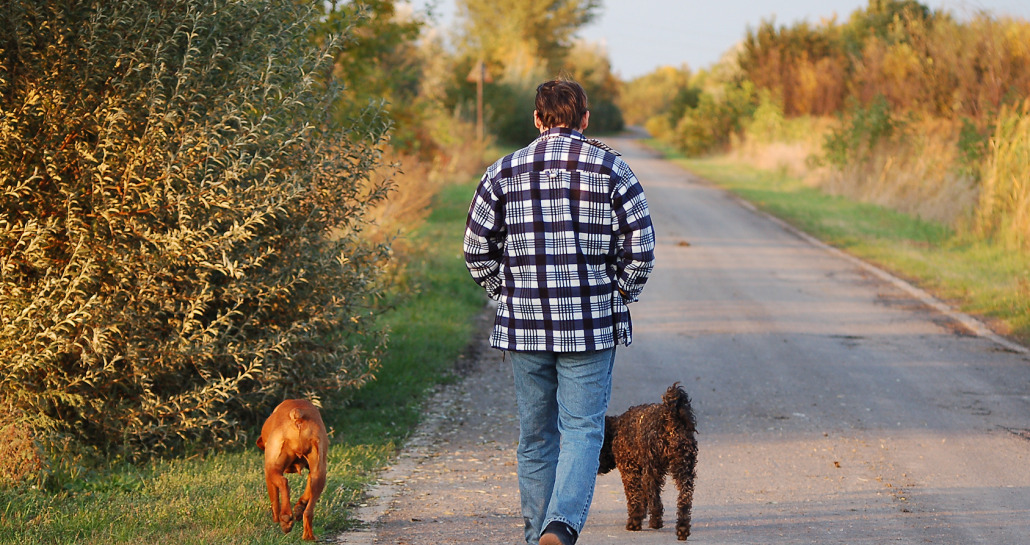 Why Dog Walking is Good for You

'Alpha got lost for five hours,' says one of the regular dog people as Albie, her working cocker spaniel, races around the park. 'He followed a bitch on heat for miles, all the way to the main road. Now his mum's had him snipped and she's bought a tracking device'. We gasp in horror at the trauma.

Alpha is a husky. I know him well, as does my dog Milo, a miniature schnauzer, who adores being pinned down by him and gently bitten on the neck. I don't know his owner's name (yes, I'm aware that the term 'owner' is seen in some rarified circles as non-pc, too clinical, too dog-as-property). She's a stylish Japanese woman and we sometimes talk about Haruki Murakami as we watch our dogs playing. That's how it is on the dog walk. You focus on the dogs' names, not the humans'.

We meet every morning around nine and stand around, mobile phones muted, discussing neutering, dog food (corn and maize gluten are very controversial), vets and breeders, training, waterproof boots, distressing digestive events and even Murakami. But as Lola (cockerpoo)'s mum (yes, sometimes 'mum' is appropriate) said the other day, 'You meet people in the park and you've no idea what their proper lives are'. And there's something very refreshing about that.

'There is a hope that a dog injects into every walk,' writes John Zeaman in his book Dog Walks Man. 'More than a hope – an expectation really – that this is going to be something wonderful.' That hope rubs off. However rainy the day, however disheartened you may feel, the sight of a dog dashing joyfully through the grass lightens the spirits.

Actor Joanna Scanlan (The Thick of It, Getting On, Puppy Love) credits a dog with getting her through a serious depression when she was younger; the website dogsfordepression.org.uk, founded in 2009 to raise awareness of the healing effect of dogs, notes that, among other benefits such as boosting self-esteem and feelings of competence and autonomy, reducing loneliness and providing exercise, routine and laughter, 'dogs are a talking point and social lubricant'.

A simple exchange of pleasantries between dog owners in the park can be hugely helpful if you are feeling isolated, depressed or anxious.' Zeaman points out that 'dogs provide a way of meeting new people without any of the usual formalities or potential for rejection...The dog-walking world is friendlier than the regular world.' What if your dog runs off, like Alpha? Yes, it's stressful, but at least you've got a team of helpful friends on the look-out.

And it's not just a mental thing: research shows that dog owners are 8.6 times more likely to still be alive one year after a heart attack than non-dog owners. Pet owners in general are at a significantly lower risk of developing coronary heart disease than non-owners, and getting a dog or cat is associated with a significant reduction in the frequency of minor physical ailments such as coughs, dizziness and hayfever.

As my friend Kathy says (her aged Cairn terrier died recently) 'dogs bring you close to the electricity of life.' Too close, sometimes, if life's looking muddy that day. There's a constant battle in the park between dog owners and other, cleaner people. 'I mean, if she walks across the field wearing white jeans at this time of the morning, what does she expect?' asks Tigger's mum after her labradoodle has jumped up yet again and left paw-prints all over a smart, irate woman who's demanding payment for her dry-cleaning bill. Tigger wasn't wearing her training collar, an expensive remote-controlled device that sprays her when she's about to do something bad.

The professional dog-walkers, the ones that do it for a living, scoff at these training aids. They stride through the park with six dogs in tow, shouting at any who dawdle in the bushes, and like nannies and parents in the school playground, they tend not to mix with us private individuals who can barely manage one dog. Control is such a loaded word. 'She has no control over her dog,' we whisper to each other as we watch a blue staffie, its owner far behind, hurtling towards a tiny, quivering Tibetan terrier.

And some dogs do seem more in control of their owners than the other way round: a pugalier that requires pheromone plug-ins to calm her down at night and who disrupts TV watching with her crazed barking at any animal on screen; a cavapoo that wakes regularly at 4am; black Russian terriers that bark so incessantly that no one can get a word in edgeways; a schnoodle that chews furniture to death. But as they chase each other around in the park, everything is forgiven and forgotten.

On the dog-walk, we're all equal.