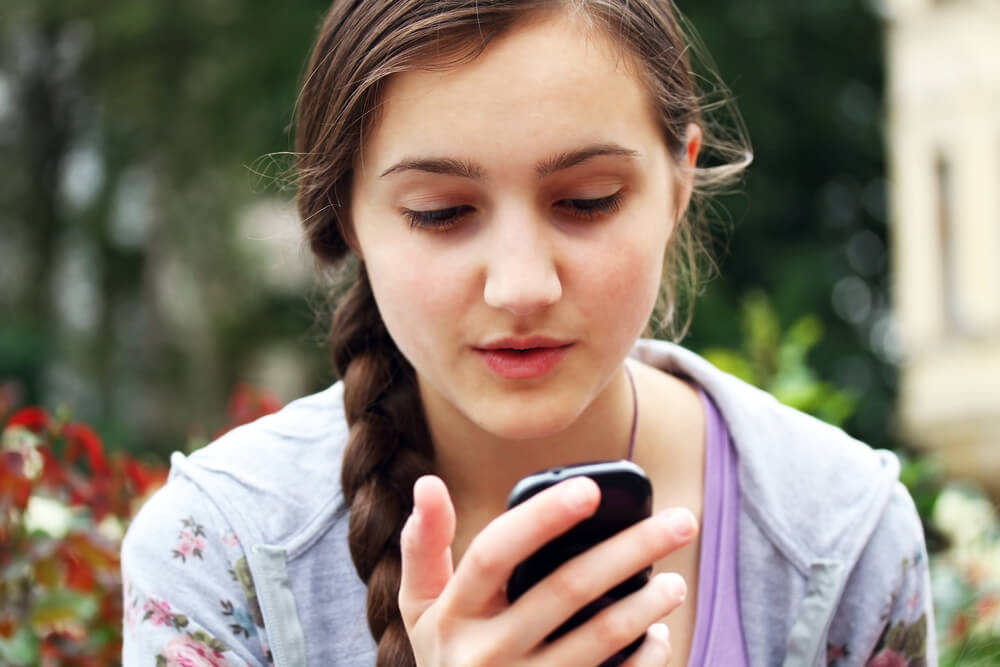 I have four children, two of which are teenage boys – Leonard is 14 and Jerry is 13 (I also have a 20 year-old son and a 10 year-old daughter). Recently I have become increasingly aware of how glued they are to screens, particularly the 14 year-old. He seems to exist solely to preen in to his phone while it bleeps and blurps. He seems to feel his online presence is as important – if not more important – than his real life flesh world.

Sometimes his addiction to social media feels off-putting. Why does he only feel valid on Snapchat? Yet it seems almost impossible to police it. Short of turning the internet off – and I do know parents who do this – how do I patrol what they are or are not doing online? In a recent study, it was found that the quality of teenagers’ sleep and therefore their mental health is affected in a negative and harmful way by late-night mobile phone use. The lead researcher, Lynette Vernon of Murdoch University in Perth, said her findings were evidence of the need for curfews for teenagers to be established around use of devices in their bedrooms.

There is a great deal of fear surrounding teens and their use of social media. And it is not just teenagers’ whose sleep and mental health suffers when using mobile devices late at night. Similar studies have found screen time affects adults’ mental health as well.

But it is teenagers that we all worry about. And their use of social media preys on our minds because it is the Great Unknown, the dark mass, the shadow.

However, recently, I made the decision to stop becoming overly concerned about my children’s use of social media. I know many people will not understand this. I have been accused by friends of being ‘mad’ and ‘in denial’. Yet I stand firm. For me, monitoring my children’s internet use is akin to reading their diaries. I am not sure if I really want to know everything they are getting up to. It might just curtail their freedom and imagination. When I was a child I did all sorts of things I probably couldn’t have explained to my mother because I probably couldn’t explain them to myself. But that’s part of growing up.

I am just not going to spend the rest of my life interrogating and alienating my teenagers and making myself paranoid and fearful all at the same time.

So I am now utterly relieved to find a new book that is highlighting how anxious parents are ‘creating a moral panic’ over social media. In their book Invisibly Blighted; The Digital Erosion of Childhood, academics from University College London (UCL) and Plymouth University Business School suggest that parents react to their children’s use of social media in a disproportionate way and that the effect of this is to cause anxiety in their teenagers.

Not only that, it also says that sexting is misunderstood by parents and that teenagers have worked out a moral code of their own.

This might sound unbelievable to some parents for whom sexting feels wrong and threatening. But, out of the four of my children, Leonard is the one who is the most social-media oriented and he always tells me that anything he and his friends get up to involves consent. I have to take him at his word because, if I don’t, I am really telling him I don’t trust him when, in fact, I do.

He tells me that my trust him means a lot to him. I give him the autonomy to make his own decisions. I am there in the background if he needs me – maybe sometimes decisions might prove to be a bit more difficult than he can handle. Also, as I have brought him up, it would feel counter-productive not to at least give him some sort of trust. It would imply that I don’t really believe I’ve done an OK job. It would seem to erode his growing sense of self to be constantly haranguing and monitoring him.

The main issue – aside from our free-floating fear of the internet – is one of communication. In order to understand the world of the teenager, we need to be invited in to it, even if it is only in a small way. The only way to achieve this is to communicate.

My son Leonard is in his own private world. It may be peopled by hundreds of people, but it is a world Leonard inhabits with his own rules and regulations. If I monitor him endlessly, I am actually infantilising him. I would be implying that he has no real ability to know what’s right from wrong or to be able to make proper decisions about his world.

Parents tend to suffer from some free-floating sense of fear dread and panic about something that is very difficult to control. Part of the reason for this is that we don’t really understand social media, certainly not in the way our teenagers do. This means it has taken on a terrible place in our psyche – we get absolutely paranoid that something dreadful and threatening is going on with teenagers via social media. And yet this is generally not true. The way teenagers use social media is very different to the way we use it as adults. They swap and change and apps come in and apps go out.

In fact, the area that teenagers hurt the most are around their relationships with real live living people and boys aged 16-plus are particularly vulnerable, wearing the carapace of the carefree pseudo-mad far more heavily than they’d really like anyone to know.

I have been working as a counsellor at No 5, a youth counselling centre in Reading for the last two and a half years. I also have my own private practice in which I see teenagers. Clients aged between 11 and 24 have brought a whole range of issues with them, from anxiety and depression, to eating disorders and self-harm. Not one of them has brought issues with social media into the room. Most of their issues stem from their relationships with real live flesh and blood people such as family and friends. In fact, in most cases, going online has been a source of support. The client who is questioning their sexuality can be massively helped by an online support system that makes him or her feel less alone and rejected. I have had clients for whom being part of a chat room about self-harm/eating disorders/suicide ideation has actually kept them far more together than if they had no access to a network that, they feel, understands them.

So the thing to do is to manage our own fears.

I am not sure our children are in any more danger than we were. Bullies are bullies and they exist throughout society. I was bullied as a child. I was sent to Coventry for no reason at all. I was flashed at, a man came to the door naked and tried to grab me when I was a newspaper girl, another man offered me sweets and tried to bundle me in to a car. All these things were horrible and frightening and, thank goodness, dealt with by my mother with whom I felt able to communicate. There was no internet back then but still the same feelings of shame, hurt, fear and, if there had been the internet, maybe I could have gone online and found a bit more support than my nearest and dearest were able to offer.