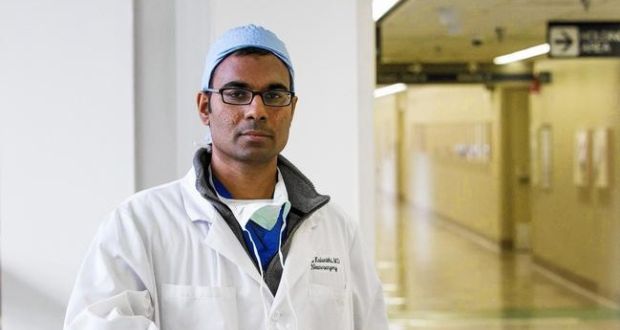 Paul Kalanthini was an unusual medic; he was obsessed with reading and had first done a bachelors then a masters in English literature. But, suddenly, in his mid-20s, he opted to join the rest of his family in becoming a doctor. The next 10 years were spent in long, exhausting training to become a neurosurgeon in the US. He'd married a fellow doctor, but things were a little rocky, when - out of a clear blue sky - he learnt he had lung cancer.  One day he was the doctor, scalpel in sure hand; the next he was the patient, not knowing how much longer he would live.

When Breath Becomes Air is the book he always wanted to write, but it did not come about the way he envisaged. He tells the story of realising the nature of his illness, then rewinds to write about how and why he became a doctor, and what medicine means in his life. And finally he tells, for as long as he was able, the story of his impending death at the same time as the arrival and early months of his baby daughter, Cady. The heartbreaking epilogue is written by his wife Lucy Kalanthini.

This book has been a bestseller, and rightly so. One of my favourite novelists Ann Patchett is quoted on the back: "This is one of a handful of books I consider to be a universal donor - I would recommend it to anyone, everyone." And that's understandable. It's a tragic tale, but both so strongly told, and beautifully expressed, that you don't feel sad, so much as moved. It brings you to consider life – and death, and to be grateful for what you have, for as long as you have it.

It's hard to choose any part to quote as there are simply too many fantastic sections. But here's a taste of Kalanthini's style: "One chapter of my life seemed to have ended; perhaps the whole book was closing. Instead of being the pastoral figure aiding a  life transition, I found myself the sheep, lost and confused. Severe illness wasn't life-altering, it was life-shattering. It felt less like an ephiphany – a piercing burst of light, illuminating What Really Matters –  and more like someone had just firebombed the path forward. Now I would have to work around it."