The Importance of Altitude Sickness: What the Alps Taught Me About Life
Find a therapist
Find a coach
Join as a practitioner
Log in/register 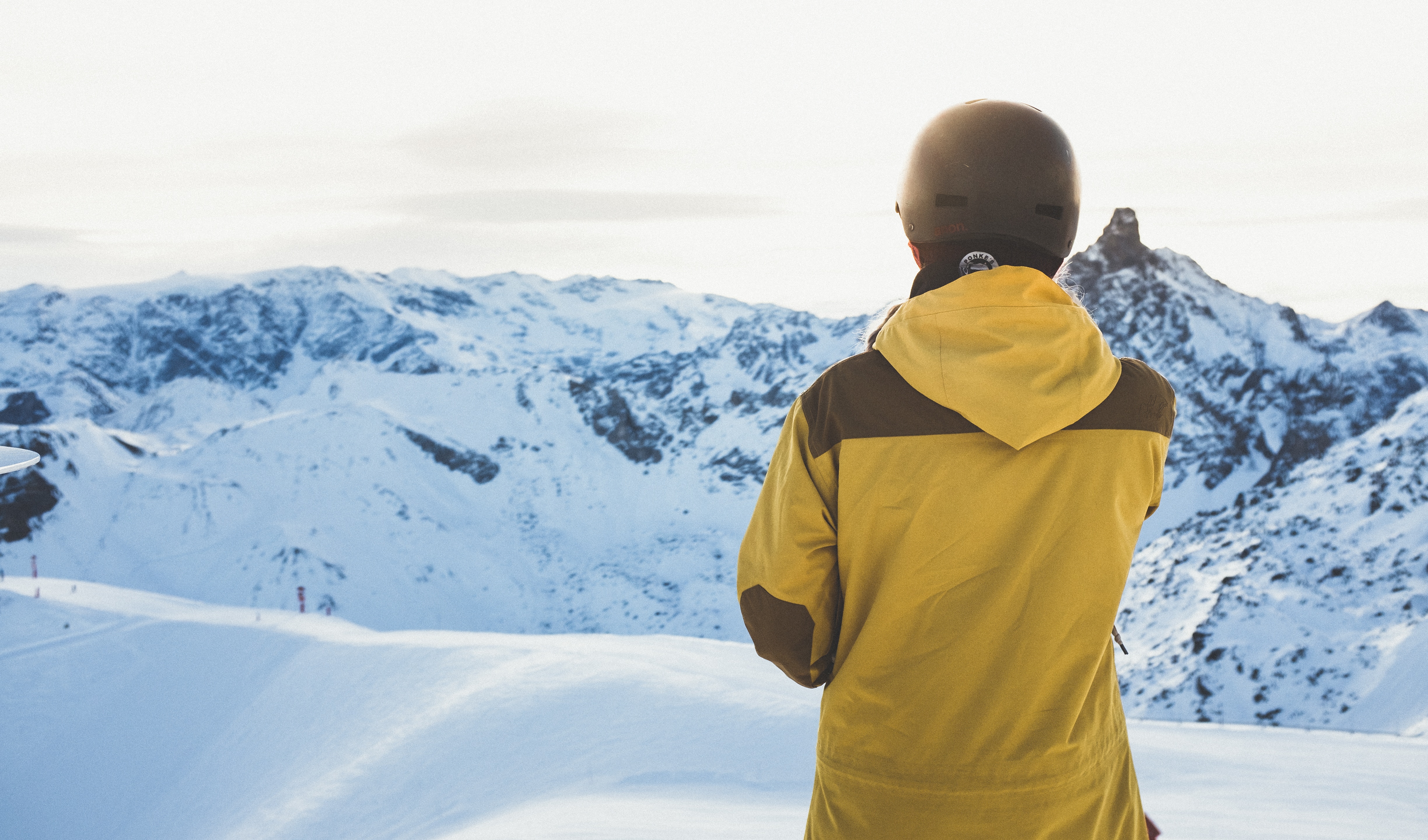 The Importance of Altitude Sickness: What the Alps Taught Me About Life

I recently fulfilled an ambition to go skiing in the Italian Alps. In my enthusiasm I snuck off from my group in the first 10 minutes as I didn’t want to be stuck on the baby slopes doing what looked like really boring exercises. As a seasoned runner and cyclist I reckoned that skiing couldn’t be that difficult. You just sort of point yourself down the slope and go. Easy. No fevered pedalling, or lung busting leg action required. I’m sure I could do this asleep. Within 15 minutes of my first ever trip to a ski slope, I had ditched my instructor (sorry Massimo) and I found myself on a Red run. It looked steep, and everyone seemed to know what they were doing; everyone except me.

Now I was up there I couldn’t see anyway down except by skiing. I decided to give it a go. Reader, I got to the bottom. Was it pretty? No. Did I spend most of it crashing and lying forlornly in the snow trying to get my skis on and off? Yes. Did I lose any semblance of grace and dignity? I sure did. Still, I managed, through a series of “controlled” crashes, to get safely to the bottom. The next day, with my tail between my legs, I made the decision to join the group. Maybe, I grudgingly conceded, I did have something to learn. As a therapist maybe I should know better?  Yes, sometimes you need a guide, especially on unfamiliar territory, to show you the way. Or to learn how to get from A to B more gracefully! Although I knew this intellectually, some over inflated part of me thought I could work it on my own. I’m sure you’ll be glad to know us therapists have our blind spots too! I had to get literally knocked down to the ground, repeatedly, in order to learn my lesson. As therapists we say this day in day out. Our patients come in and tell us the ego, the “I”, can master every situation. Yet, the “I” always bumps into more powerful forces – inner and outer -  and usually gets a beating.  The conscious mind generally gets too big for its boots. We usually need to listen to and enlist the unconscious to really grapple with the difficulties and risks of life.

Later in the day, after my lessons, when I was practicing on my own, I found myself in the wrong lift again. The wrong lift once I could explain away as an accident, but twice? This is what Freud might have called “repetition compulsion”, when we keep recreating a situation again and again, hoping that we can figure it out this time round. Usually, we don’t. And then we do it again. This process happens without our knowledge, driven by unconscious processes. I knew something wasn’t quite right when I got on this lift, I had a feeling in my stomach, but I couldn’t quite figure it out. I had a feeling of dread and was about to bail, but ended up getting on, overriding my instincts.

To confirm my worst fears the lift just kept going and going upwards. I felt a knot in my stomach. The guy next to me looked very intense. I had ended up on another Red Run. Not all Red Runs are the same. This Red Run was really Red! Skiers jumped of the lift and floated and flitted like birds, turning and twisting and darting straight down the slope. This time I knew I was out of my league. I took off my skis, and found a small valley to the side of the carefully groomed piste, and carefully slid myself back to the flatter slopes. Various skiers stopped by to check I was ok. I said, “I’m not injured, just embarrassed…” Half an hour later I was back on more comfortable ground and I was able to put my skiis back on. Although this was a humiliation to my ego, I had surrendered and accepted defeat. A lucky escape.

Interestingly, I had found myself attracted to the higher slopes. I had been drawn to areas where I didn’t have the skills for. I somehow managed to “accidentally” repeat this. The second time, humbled and a little frightened, I had chosen to make a safe descent. On the last day I took the ski lift (without skis) up to the glacier. I was only able to go part way as I had missed the final lift cut off time. I was secretly relieved. I really didn’t want to go any higher. For some reason I felt nervous about going up to 3000 metres, even though I wasn’t skiing. When I returned to the hotel I remember feeling a little nauseous and unwell. I knew the signs of mild altitude sickness, which I seem to suffer from. It’s a useful warning signal from the body, telling I needed to get down from the mountains. So, every day, I had become more and more cautious. The unforgiving terrain had educated me.

Still, our culture often makes us feel that we can do anything, and that we shouldn’t back down. In the last few days I read about a French woman and Polish man who ascended the very dangerous K2 mountain without oxygen. The Polish man died, and the French woman took her shoes off after hallucinations brought on by altitude sickness. She has been told by doctors that her hands and feet may have to be amputated due to frost bite.  Even so, she said she would be back in the mountains, because, she said, “I need this.” The climber Beck Weathers, a very driven American doctor, said he used to climb to deal with a deep depression. The total dedication and obsession required to climb, combined with the physical exhaustion, seemed to cure him of his depression. 1/6 people who climb Everest don’t make it down alive. Nevertheless, he was a man possessed. It was only a near death experience, resulting in him losing his hands, that he gave up climbing and found himself finally reunited with his family. Many psychoanalysts say it’s very important to accept our limits. In a culture that pushes us to extremes, it is very important to accept our vulnerabilities. It’s a lesson Beck Weathers has taken to heart: he no longer climbs, but is happier than he has ever been.

On the penultimate day in the hotel I got talking to a man who was a very experienced skier who enjoyed going off-piste, outside the prepared ski areas. I was impressed, but on the last day he went missing with his 13-year-old daughter. We feared the worst. His last ski pass use had been at 10.30 am at 3000 metres at the top of a glacier. The one I had turned back from because I had missed the cut off time. He hadn’t been seen or heard from since. As night fell, the helicopters and search parties returned to base. No sign of him. No phone. No signal. No flares. Nothing at all. Everyone in the hotel was in total shock; no one could sleep. The next day he had still not been sighted. This was a tragedy. At 9.30 just as I was leaving, there was news they had been found. They had got lost off the top of the glacier. Even with all that experience. They had then walked non stop for 16 hours through the night in order to stay warm and stave off sleep. They eventually found shelter, and were picked up at 9.30.

It was an incredible ending to what could have been a terrible misadventure. I wondered, what is it about getting “high”? It’s easy enough to get up there, but it’s hard to get down. Marie Louise Von Franz, the Jungian analyst worked with a lot of such cases. In her book, the Puer Aeternus, she recalls the case of young men who had trained themselves to sleep on mountains without any camping gear. The idea being that they didn’t want anything to weigh them down, either kit wise or psychologically. But mountains are extremely dangerous. They cut us down to size.  The top of Everest, with its thin, lifeless air, is known as the death zone. People get up mountains, but sometimes they don’t get down. On a very minute scale, I experienced this over-inflation. Oblivious to the people being carted off the slopes in ski ambulances, I ended up on slopes that were beyond my ability. Similarly, my fellow guest, despite his decades of experience, had become disoriented off-piste, and without any back up plan. He was able to draw on inner resources, but it was very risky. Luckily, we avoided injury or worse, but both felt somewhat chastised in our different ways.

The body’s physical and psychological warning systems, such as altitude sickness, have an important role to play.  Even though you can get medicine to rid yourself of altitude sickness, perhaps that is not always so wise? Watching the winter Olympics it's easy to get carried away. However, if you watch an interview with any of those athletes, you’ll find that they are riddled with injuries: metal rods run through bodies that are broken and battered, and they have spent months in hospitals and rehabs. Still, something keeps them going back. This knife-edge existence is extremely precarious. That is why the gods can live in Mount Olympus, but not humans. We can spend a few days at altitude, but then we need to come down to sea level. When we go up, we need to carry emergency supplies, whistles, flares, and plenty of humility, or we risk being thrown down the mountain.

Addictions work in a similar way. It is maybe easy to get “high”; it seems like you can live up there forever; but then one wrong step; or just bad luck, and you find yourself caught up in avalanche. Von Franz warned of the dangers of over-inflation. It is very depressing to have to face our limitations and vulnerability. The Puer Aeturnus, wants to deny these limits. This works for a while, and can even be very heroic. But in the end the hero usually meets a grisly end. A life with no challenge or risk is dry and dull. But when a person only feels a alive when dicing with danger, that is another matter. My initiation to mountain sports has given me plenty of food for thought. The deeper I got into the skiing, the more aware of my limits I became. To be honest, I was glad to get back to earth, and place one foot in front of the other. On a more serious note, my fellow hotel guest, Gary Raine, appeared in an article in the Sun, and seemed grateful to have survived a very harrowing ordeal. The headline says, “they were lucky to be alive.”  Sometimes, although very unpleasant, altitude sickness can be a life saver!