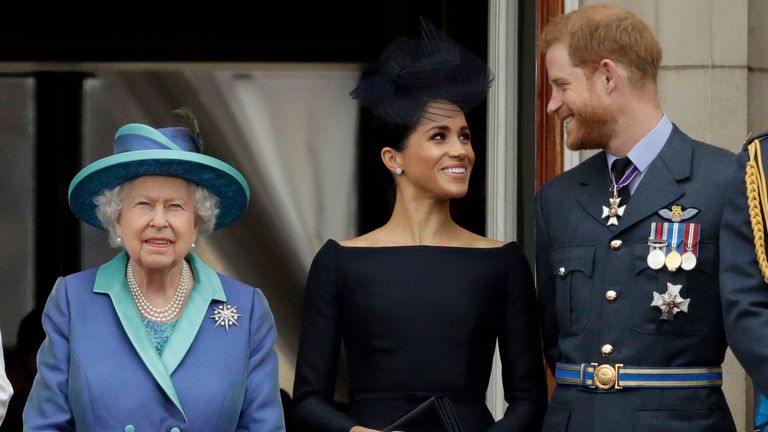 We love a family drama. Even better if it includes a good looking couple with issues of class, race, gender, generation, and nationality thrown in. Posh East Enders. The backdrop of International Women’s Day and Black Lives Matters, and Covid fatigue adds an extra kick to this tale. Whether you are a monarchist or anarchist, this royal couple capture our imaginations, and constellate something of the Hieros Gamos (Sacred Wedding). We can’t see Zeus and Hera dancing in the smog filled heavens anymore, but we can certainly take a ring side seat in front of the TV with some wine and a bag of very large crisps.

The crew at Gogglebox must be salivating. Everyone will have a viewpoint. This royal couple will provide us with fiery sauce with which to view our own mundane family relationships.

Is she acting? Is she the Black Sheep of the family? Is the Royal Family racist? Has he married his mother? Does she have daddy issues? Does the British establishment smell of stewed cabbage?

Many aeons ago, for my PhD I interviewed families across the generations, and I was amazed at how family scripts and myths can animate families across generations. We think we are acting of our own free-will. Yet, if we zoom out, we see we are playing our part in the latest instalment of unfinished family drama. Not only do we look like our relatives, but we act like them, both consciously and unconsciously. Secrets, tragedies, addictions, brilliance, all bubble across the family tree. Family histories and stories are material that you can revisit again and again. It’s a heady brew, rich and ripe for interpretation and insights.

However, we don’t need to be prisoners to our past. The pioneering family therapist John Byng-Hall argued that we either create replicative, corrective or improvised scripts based on our families stories. He believed that the two person focus of modern therapy missed out the powerful influence of transgenerational dynamics and complex family life. He argued for a more systemic approach, that allows us to see multiple threads running through the family tapestry.

In this case we may wonder, are Harry and Meghan playing out a pre-determined script? Meghan is hounded by the (evil) press, driving her to near-suicide. This is the “replicative” script. Harry is a helpless bystander, just like he was as a twelve-year old boy, when his mother died in a car accident.

Harry and Meghan have decided that they don’t want to play this version out. They want a “corrective script.” Just like in Suits, Meghan is going to write her own story. Byng-Hall argued that we can turn things around by re-editing our past, and re-writing our futures. As an actress, Meghan has taken Byng-Hall’s theory to heart, quite literally! Even though the Press, the Firm and even her hapless father have let her down, she is not going to self-destruct. If the Firm won’t pay her, she’ll find a new contract. Sometimes, we decide we don’t want the lives of our parents, and we re-write the script. Rather than being helpless, this Royal couple have become agents in their destiny.

Obviously Harry couldn’t save his mum. But he can save Meghan. He can change jobs, change countries. Find a good family and generous family (Netflix, unlimited coffers, kind and doting), who understand this couple and promote them accordingly. No longer the Black Sheep and wayward younger brother, they have been promoted to the position of first family of TV royalty. Their competitive instincts have been unleashed. The dynamic market has replaced the cabbage-soaked palace machinery. The troublesome stuck in their ways royal ushers have been replaced by modern day cheerleaders: the amiable James Corden, and gushing Oprah Winfrey.

I was struck that Meghan had asked the Queen for a waffle maker as a Christmas present. Apparently their young son’s first words in the morning are “Waffle!” The British meaning of the word is instructive: “to speak or write at length in a vague or trivial manner.” Perhaps Meghan and Harry felt they had endured enough waffling. This was their in-joke. To get the Waffler-in-Chief to actually send them a Waffle maker to the US! The North American meaning is slightly different, “fail to make up one's mind.” Well, with this interview, Meghan and Harry can’t be accused of that. They’ve set out their stall. For now they have been consumed with drafting a corrective script. However, now they have a secure base in the US, perhaps they will be freer to improvise a truly unique script of their own making. I have a feeling we haven’t heard the end of this particular storyline.

Meghan Markle and the psychology of media backlash