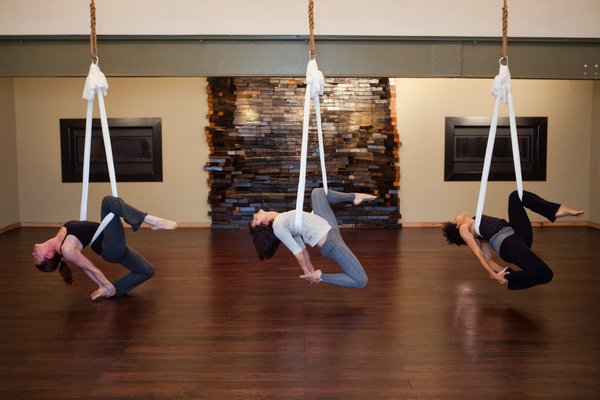 Get High with Aerial Yoga

30 New Road is a narrow, unremarkable terraced house in Whitechapel, a stone’s throw from the Royal London Hospital and the bustle of the street market on the Whitechapel Road. But it's here you'll find Richard Holroyd, former Buddhist monk and now chief flying instructor at Aerial Yoga London.

“I was teaching yoga for years and I just couldn’t get my students to understand that this is supposed to be fun,” says Richard. “Then I discovered the swings: now it’s instant”. Swings awaken the child in all of us. If you don’t want to play when you catch sight of the colourful nylon contraptions in Richard’s studio, then you are more grown up than I will ever be. I couldn’t wait to get flying. “Yes, people can get a bit overexcited,” Richard told me. It’s a good thing, then, that he’s so grounded and down-to-earth, because this is seriously mood-altering stuff. “At the end of the class no-one wants to leave. It gets to be a little bit addictive.”

Aerial yoga is a very recent addition to the panoply of styles on offer in the UK. A simple swing, like a mini-hammock, made of parachute material and suspended from the ceiling, allows students to defy gravity, turning familiar poses upside-down and giving yoga veterans like me a whole new perspective. It’s not just about acrobatic inversions: the swing makes a soothing cocoon for relaxation, and a useful support for all sorts of warm-up and cool-down exercises. It’s also much safer than it might sound: the swings in Richard’s studio are not very high, and they are easily adjustable so you’re never more than a few inches off the ground. Three straps on each side, of varying lengths but each with a foam-wrapped handgrip, allow you to stretch arms and legs out to make familiar yoga shapes in mid air. Anyone can do the basics, but it takes strength, coordination and lots of body awareness to get really skilful.

Yet contrary to what you might think, aerial yoga doesn’t necessarily favour small, athletic bodies. According to Richard, it’s brilliant for people carrying extra weight who might not feel confident about attending a regular mat-based class. I could feel right away how it changed my relationship with gravity, lending a sensation not exactly of weightlessness, but of lightness and an extra source of support. And with just four swings in the room, every class has the cosy feel of a private session.

It’s sometimes said that there are only 14 yoga postures, but they can all be performed on a number of different planes – standing, sitting, inverted, prone, supine, reversed. Now we have to add another: mid air. For example, normally a backbend like Urdhva Dhanurasana (upward-facing bow/wheel pose) means strong contact between hands-and-feet and mat, with the rest of the body held up in the air. Here, the whole pelvis is supported and there’s no weight on my hands and feet – and suddenly it’s purely about my spine extending and extending, pouring easily towards the ground. It’s not only exhilarating, it also shakes up your notions of what each posture could be. I finished the class feeling high as a kite, light and strong and fired up about the creative possibilities of yoga.

Richard told me, “At this stage, it’s not well known among the yoga community; I think most yoga teachers, if they’ve heard of it at all, would probably dismiss it as a bit of a gimmick. But that’s not the case; it has real potential as a therapeutic form and I think yoga teachers see that as soon as they try it out.” This one certainly did. But I also felt very glad the studio was in the hands of someone like Richard, who is both evangelical about its potential to heal, and refreshingly open about sharing the benefits with others. His simple, welcoming studio is no cynical franchise-in-waiting, but the heart of a collective of like-minded flyers.