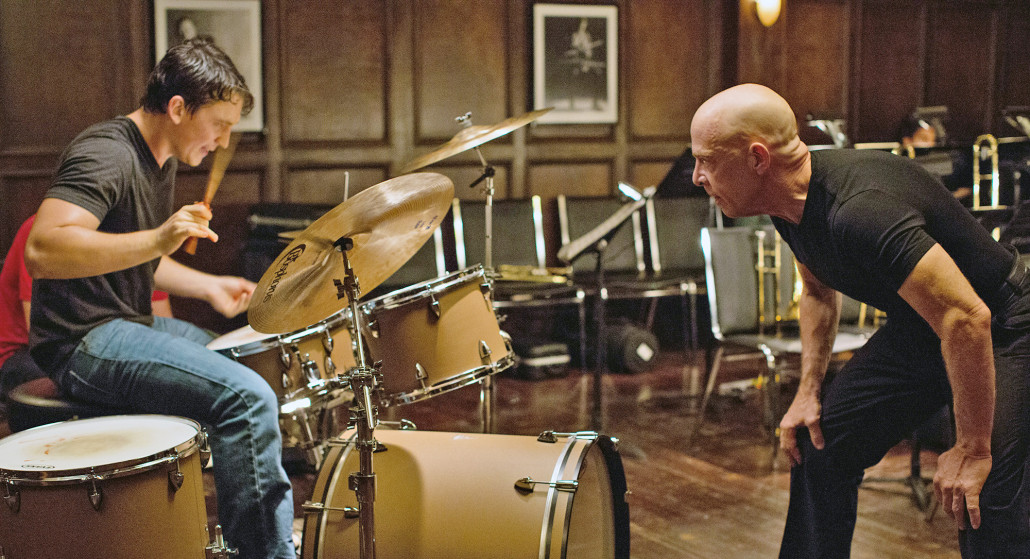 Damien Chazelle wrote and directed Whiplash drawing from his own experience, in this edge of the seat ride into the sadistic mind games of a teacher and music conductor at a top New York music academy.

Fletcher, (brilliantly captured by Golden Globe nominee JK Simmons) reveals his manipulative techniques the moment he watches Andrew Neiman practise his drums after hours, then leaves without a word. Andrew, (a brilliant performance by Miles Teller), lives and breathes his instrument, as he listens to the greats, thrilled to be asked to audition by Fletcher, conducting the school’s gifted band, every student’s dream. Fletcher is respected and feared “Let’s see if it’s just because you’re cute”, putting students down at every turn, giving the students mere seconds to prove their worth, and summoning Andrew for a 6am try out, when the call is for 9am.  In his presence, musicians stand to attention, as he puts “squeaker”, Neiman, through his paces.

Fletcher’s rants are full of sexual imagery, ritual humiliation, racism, sexism, anti-semitism, and homophobia.  “That is not your boyfriend’s dick” he tells a trumpeter, “do not come early”. These might be funny if they weren’t so chilling, endlessly berating the band for being out of tune, or in poor timing.  “Were you rushing or were you dragging”, he slaps Andrew’s face to his timing, chucking a chair at him, “If you deliberately sabotage my band I will fuck you like a pig”, and we believe him. But of course there is also faint praise, “You’re here for a reason”, setting up Andrew’s grandiosity, and soon he’s parroting his teacher, obnoxious to his family, and sneering at his girlfriend’s lack of clarity and ambition. Fletcher’s humiliations inspire anxiety, envy, insecurity and competition, as drummers are demoted to turning music pages, then back to drums, and no one dares stand up to him. Using Andrew’s personal wounds as grist for his training tactics, “Fuck, no wonder mummy ran out on you”, he puts the boot in with every line, driving Andrew’s desire to prove him wrong, as he practises till his hands bleed, becoming isolated from all that is good for him. Fletcher enjoys the impact of his cruelty, believing he is creating the next musical genius, as he tells the story of Charlie Parker, whose teacher threw a cymbal at his head, bullying him into becoming a celebrated musician. “There are no two words in the English language more harmful than good job”; this is Fletcher’s message and the film’s, suggesting that Andrew’s liberal loving father fails to push him, while his abuse drives Andrew’s desire to be the best. Indeed the edge of the seat climactic solo sees the ‘creation’ of genius, no matter the torture endured, with Whiplash a fitting title for this stomach-clenching ride. As he stands up to his teacher in a bloody battle, the camera pans to the power play as we watch with sickening dread for who will emerge the victor, and who might be destroyed.  It’s a punishing dynamic in which both parties are endlessly caught. [embed]https://www.youtube.com/watch?v=zIP_gtjDtfE[/embed]